Clair and I were summoned to the French Riviera by a potential client—an Italian countess named Bossi who had inherited a billion-dollar fortune from her late husband.

After flying all night, we stood before a pair of 20-foot-high wrought iron gates guarding her vast Cap d’Ail estate.  Snarling German shepherds on the other side looked at us as if brunch had arrived.

I rang the bell, identified myself; the dogs were called off, and the massive gates swung open.

Our cabbie ascended the curves, up, up and around, overlooking the Principality of Monaco and the azure Mediterranean beyond, until we spilled into an Italianate piazza.

A butler escorted us into a living room where floor-to-ceiling windows framed an immaculately landscaped garden.  In the distance, a waterfall cascaded down a mountain into the swimming pool.

Clair stood transfixed, in awe.  He’d seen ostentatious palaces of Arab princes with gold plated bathroom fixtures, but none of it, he said, had any class. This was a different story.  Old money.  Subtlety.  Taste.  On the walls hung full-length family portraitures by famed Hungarian portraitist Philip d’Lazlo.

The countess strode in, offered her hand.  She was attractive for seventy-something.  “Would you like a drink?”

She poured three shots of Bitter—red juice, on the rocks, an orange twist—and led us into the garden for a tour of  “antique” rose bushes, some, she said, over 140 years old.  We trekked through trestle passages and around a duck pond.

A bell rang to signal luncheon and we returned to the patio where a table had been elegantly laid with fine linen, bone china and sterling silver cutlery.

I complimented the countess.

Passing rainclouds showered the garden—we sat beneath a canopy—and dozens of frogs voiced their appreciation with a cacophony of croaks.

Finally, over coffee, the countess poured out her heart to the spymaster and me.

The problem concerned her ex-son-in-law, a German baron, who had caused her family a great deal of anguish.

The baron had been married to her only child for several years and, upon divorce six years before, had been paid a handsome fee to get lost.

But part of the equation was a nine year-old son, and the baron was now doing everything possible to gain custody of her sole grandchild and heir to the family fortune.

The baron’s action, she believed, was less about wanting custody and more about sticking it to the family for another large payoff, which she wished to avoid on the basis that such demands would never end.

The countess depicted the baron as a pretentious, do-nothing musician.

Mother and son resided in Switzerland; Baron von Biggleswurm in a small town in northern Germany near Hannover.

According to the countess, her grandson loathed visits with his nutty father, but was nonetheless compelled by a Swiss court to spend a week with him at Easter, a week at New Year’s, assorted weekends and five weeks every summer.

Twice, the baron had attempted to defy the court and hold his son beyond his allotted time.  On one occasion, police were called and caught up with father and son in Berlin, where the baron spent a day in the can.

Despite his breach, the court refused to revoke the baron’s visitation rights; during visits, the baron was under no obligation to keep his ex-wife informed about where he would travel with their son.

Recently, when things were not going his way over new action he had initiated in the Swiss court, the baron muttered under his breath that he would take the boy to South America and disappear.

The countess lived in terror that he would do this and she would never see her grandson again.  She sobbed as she recounted how the stress of dealing with the baron probably killed her husband, who died two years earlier, aged 88.

“He was a strong man," she said, wiping tears away. "That marriage was the only thing that ever bothered him, and it bothered him a lot—his only daughter, with that clownish gold-digger.  And now it’s just my daughter and me.  She tells me to mind my own business, but I must do something, no?”

Our potential assignment, pending another meeting:

Keep tabs on Baron von Biggleswurm and ensure that he did not abscond with the sole heir to the Bossi fortune.  And, if possible, identify whatever new litigation the balmy baron planned in his ongoing fight for full custody.

On our way out, the countess showed us portraits Salvador Dali had painted of herself and her husband.

She came out the better, a stunningly beautiful painting that rendered the countess in spheres.  This hung on a wall in her den. 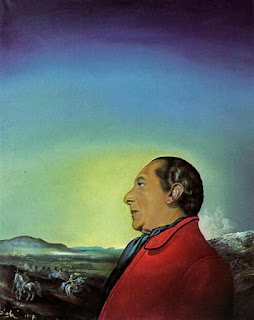 She had to retrieve the other portrait from a closet:   It clearly conveyed which of the two Dali preferred.

The countess clarified the situation:  “Salvador was in love with me.”

In the forecourt, saying goodbye, the countess took my hand warmly in both of hers.

"Please think about my problem," she pleaded, "and solve it for me."