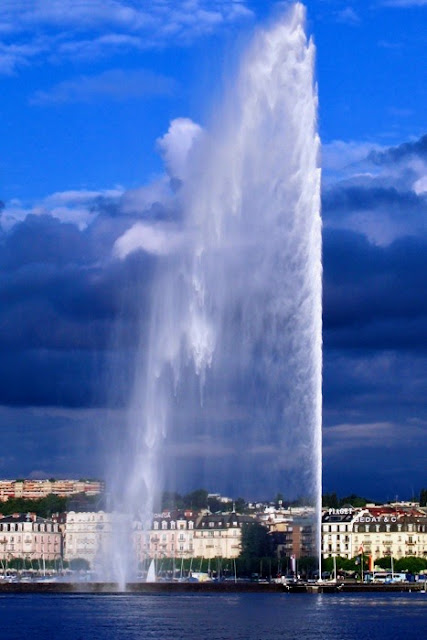 When I telephoned Art Stimson, a retired CIA officer based in Germany, and told him I would travel with Clair George to Geneva, Switzerland, and we needed to see him, Art did not say what about?  He said where and when?

Such was how CIA alumnus felt about Clair, a living legend among his colleagues and also throughout the hallowed halls of Langley.

Another such former colleague of Clair's inadvertently joined us aboard Swissair’s inaugural flight from Washington-Dulles to Zurich, with connection to Serene City.

Jim Fees dressed like a prosperous banker in a navy pinstripe suit and bespoke striped shirt with white collar.  Clair wore his customary navy blazer, button-down shirt and, of course, his Burberry raincoat.  I wore blue jeans and shirtsleeves.

At check-in, a Swissair employee recognized Clair and said she and her husband backed him all the way against Independent Prosecutor Lawrence Walsh (who spent part of his career defending thalidomide) and his team of Iran-Contra persecutors.

Fees and I exchanged glances.

Pointing at Clair, I quipped, “That’s the last time I’m traveling with him—he’s blowing our cover!”

Clair had just emerged from his first trial, which ended in a hung jury.  It had been a harrowing, hellacious time for the former spymaster.

Imagine serving your country faithfully, courageously, for 33 years, being paid peanuts, but giving your best, earning two Distinguished Intelligence Medals along the way, and rising to the top job through pure merit.

And then having to endure a bug-eyed prosecutor stand over you for three long weeks, glaring at you, pointing at you, and berating you in front of your friends and family and a pack of media hounds, denouncing you as a liar and a traitor.

Makes you wonder why anyone in their right mind would sign up with Uncle Sam.


Swissair celebrated their maiden flight from Washington by cracking open champagne and handing out gifts, mini Swiss Army Knives and travel alarm clocks (made in Japan)—to the 30 or so passengers aboard the jumbo jet.

As I sat sipping bubbly, looking at Manhattan lit up two miles below me, I thought, Gee, I could do this all night, around the globe.

We cruised smoothly into Boston's Logan Airport, a quick stop to pick up a few more passengers, and I felt total contentment, on my way to Switzerland with a pair of former CIA luminaries.

In Zurich, with a half-hour to kill between flights, Clair and I found a café for hot chocolate; Fees dashed off to a phone. Clair rolled his eyes.

“He always has to make a call," said Clair.  "And he’s one of these guys who can’t stay in the same place for more than five days without growing restless.”

Fees and Clair had been neighbors and rivals at the agency, vying for promotion within its ranks.

Once Clair was firmly on track to win the top job, Fees quit, in 1980, and went to work for a wealthy self-exiled Libyan.

Ever since, Fees had been enjoying the high-life, and rubbing it in.  Clair added that CIA frowns on employees that leave at the peak of their careers to become high-priced private consultants.

The short flight to Geneva was perhaps the most graceful I’d ever flown, with sweeping views of Berne, Montreux, Lausanne and Lake Lemann.  And then Geneva came into view, its landmark fountain, the Jetteau, shooting spray up toward us.

Clair and I had to wait for our bags; Fees, who’d carried his, scurried off to find a telephone and his BMW.

As we drove into town, Fees regaled us with stories, the first couple dealing with his wealthy Libyan client, climaxing each story with a high-pitched giggle.

Fees dropped us at Le Richemond, a clubby, comfortable hotel near Lake Lemann, and much later returned to initiate us into Serene City.

If you want to see a foreign city, do it with a former CIA chief of station.

We zipped into Hotel Des Bergues, to its “spy bar,” so-called (by Fees) for its seven ways to get in and out.

“A spy must have as many exits as possible in any situation,” said Fees, before dashing out through one of them to use a telephone.

I could have sat sipping nutty Swiss white wine through the evening in this bar, but Fees, rebounding, had other plans.

We climbed into his beamer and roared out of town—to nearby Cologny and Le Cheval Blanc, the finest restaurant in the region.

En route, Fees bitched about what CIA had become.

“The goddam shop is more interested in having meetings on sexual discrimination than collecting intelligence,” he moaned.  “When I was station chief here, a female spy arrived for duty, and she bold-faced asked me if I was partial to discriminatory practices.  And I told her, ‘I don’t give a f--- if you’re male or female, black, white yellow or purple—all I care about is scalps.  You get scalps, you get commended, period.’”  Fees eructed another high-pitched giggle.

Over a fabulous filet of sole and rich chocolate cake, Fees related Cold War espionage tales.  It didn’t matter that I was listening; I was with Clair George, and anyone with Clair was okay, part of The Net.

Returning to central Geneva, Fees parked in front of Maxim’s and turned to me with a wink.  “Time for a little treat."

We tumbled downstairs to the swank club’s bar.

Fees was greeted effusively by the manager, then ordered a bottle of champagne.  “The good stuff,” he whispered to the bartender.

It was not yet midnight; the bar was empty apart from a handful of scantily-dressed young women floating around.

“Let’s invite them over,” said Fees.
In fact, a pair of them ambled over to us.

Neither Ludmila nor Svetlana spoke much English.  They were Russian, part of the floorshow.  All the dancers at Maxim’s were Russian, they told us—most of them looking for a door into the USA.

Ludmila, a blonde, tried to snuggle close to Clair, dropped her hand to his knee.  Clair sat there, indifferent, nonchalant, sipping champagne, basking in the incongruity of it all.  We were a long way from sleepy Bethesda.

“Jeez, we really did win the Cold War,” I whispered to Fees.

“It’s what you call the spoils of war, my son,” he whispered back.  “And since I fought it, I get to enjoy it the most.”  Fees giggled—and ordered a second bottle of the good stuff.

Both Russian beauties bleated over and over again, “I love CIA."

Svetlana excused herself, and moments later appeared onstage, solo.  She danced sensually with the agility of a gymnast—a kind of belly dancer-meets limbo rock number, clad only in a bikini brief.

“They ask a thousand francs,” whispered Fees.  “But you can have them for five hundred—or two for the price of one.”

Svetlana told me that she trained as a trapeze artist; that she’d been doing acrobatics since the age of five.  Then she whispered to Ludmila about how they might get Clair and me to invite them to the USA, where they could become famous dancers.

But Clair was done.  He called it a night and quickly departed.  (Clair had but one love in his life, his wife, Mary—and before Mary, his mother, who, now quite elderly, lived a half mile from her son.  It wasn’t unusual for me to run into Clair helping his mother shop at Giant supermarket in Westbard Shopping Center.)

I stuck around with Fees and listened to his stories, one about taxi drivers in Serene City.

“You know how, in Hollywood, taxi drivers and waiters are all aspiring actors?  In Geneva, everyone is an aspiring banker.  Every goddam one of them has a financial deal they’re begging to pitch at anyone who’ll listen.   Take my barber.  One day I’m getting my hair trimmed, and he says to me, ‘I got someone I want you to meet—it’s big, really big.’  And I say, ‘I don’t want to meet anyone, I know enough people.’  Later I find out it was Ghorbanifar, that goddam Iranian.  Richard Secord got to meet him instead.”  Fees ripped another high-pitched giggle.  “Let me tell you, I know more things by accident than most people know on purpose.”

That line stuck with me and, ever since, I've been using it myself, because it's true.

Sometime past 2:30, I begged off, body and soul scrambled by trans-Atlantic travel and fatigue.

A new day would soon appear before I could tie up the old one.

In just a few hours' time, Clair and I had an appointment to keep.

An appointment with Countess Bossi.

Posted by Robert Eringer at 7:49 AM