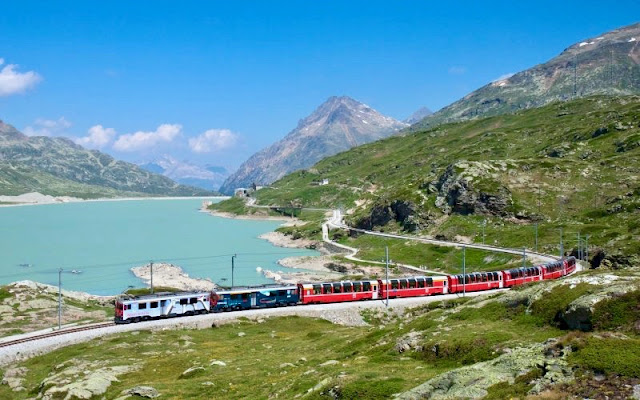 I phoned Clair’s room in Le Richemond at 8:30 and awakened him from deep slumber.

When we met a half-hour later on the verandah, I greeted him with Time magazine, which had just published a full-page article about him.

Time reported that Clair had returned home from a post-trial vacation in Maine.  Little did anyone know, least of all any reporters, that he was sitting here with me in Geneva, about to consult with a billionaire countess.
At 11:20 our Mercedes taxi stood waiting. I climbed in first.  Then Clair.  Brrrrrrrrrrraaaap!  Clair looked at me sheepishly.  Too much champagne the night before?  No.  His business suit trousers had split at the crotch.

“You want to carry on without me?” he asked.

Clair returned to his room and emerged eight minutes later in a blazer and khakis.

It forever boggled my mind how Clair always found whatever he needed from the small travel bag he carried on our many trips to Europe.  I would come to call it The Magic Bag because it seemed bottomless.

Our driver whisked us to the office of a colorless individual I dubbed The Gray Fiduciary—every billionaire needs one.

It was apparent within 30 seconds of joining the countess and her fiduciary that the assignment was a given; a decision had already been made to retain our services.

The Gray Fiduciary provided his fax number for invoicing; he had, a week earlier, wired thousands of dollars to cover the cost of our presence in Serene City.

We left the fiduciary, and the countess joined us at Le Richemond with her cousin, Bruno.

Our morning session had confirmed the business transaction.  Now we moved onto substantive issues.

The countess elucidated us with further detail about her ex-son-in-law, Baron von Biggleswurm.

He had met her daughter, Lara, at a party in St. Moritz, where the count and countess owned a chalet.

They had not liked the baron from the start; the count considered him the village idiot of St. Moritz.

The baron then wooed Lara by mail for two years, recognizing, said the countess, that she was one of Europe’s wealthiest and most eligible bachelorettes.

When Lara finally agreed to meet him again, Biggleswurm postured himself as a struggling cellist in need of a benefactor.  She came to his aid by organizing a concert appearance for him, renting a hall and underwriting the advertising.  Seven persons showed up; one of them was a critic who panned his performance.

And then she fell in love with the baron.

Her parents and all her friends begged her to recognize that Biggleswurm was a gold-digger.  But despite their pleas, she wed the baron. (The count and countess boycotted the wedding, which took place in Paris.)

Within a year, Lara became pregnant with their son.

The marriage turned sour almost immediately; the baron’s charms and affection switched off.

His wife stuck with it, embarrassed that her parents had been right all along, but finally, after suffering more than enough, she fled and filed for divorce.

Biggleswurm quickly ran through his pay-off and henceforth used the boy as a weapon to gouge more.

The countess provided us with full names, birthdates, addresses and other details needed for us to get started.

Her only stipulation was that we were to work around her daughter, who, she insisted must know nothing of our mission.

Lara apparently considered the predicament her own problem, her own mistake, and did not want her mother meddling into her affairs.  She would, we were told, become angry if she knew the countess had retained us.

“It’s a pride thing,” said the countess.  “We were right all along about Biggleswurm and she knows it.  She doesn’t want to be humiliated any further.”

Cousin Bruno seemed to have other ideas.  “Lara needs a man,” he chirped in.

Clair and I exchanged glances, like, is this part of the assignment?

We saw them to the door, watched them revolve onto the street, and took off other direction for some fresh air.

With little sleep, fatigue had cut in big-time, my brain unwilling to connect with my mouth. 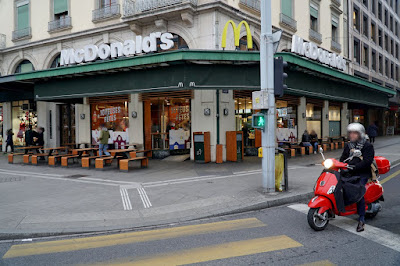 A solution occurred to me:

(Nothing like a belly full of grease to get you up and running.)


So we pigged out on scrumptious Big Macs and French fries and milk shakes (better in Europe than the USA), relishing each bite and every slurp.

Afterwards, we took a long lakeside walk, followed by a stroll around the old town, stopping at J. Weston, a high-class shoe store to inspect its window display.  I pointed out a pair of black crocodile monk strap shoes to Clair, and converted the price:  $1700.  He almost choked.

Then back to Le Richemond—and Art Stimson, who flew in from Germany after a summons from Clair through me. 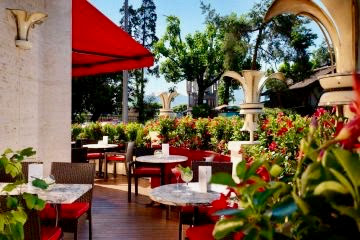 He, Clair and I sat in a detached part of the verandah away from prying ears, and I laid out the assignment.

Art's mission in a nutshell:  to visit the village of Biggleswurm in northern Germany and dig up intelligence on our nutcase baron, Von Biggleswurm.

After ensuring it was okay with me, Clair told Fees the name of our new client

Fees whistled softly.  “An introduction like that is worth a million dollars,” he said.

Clair continued on with a slow, rambling description of our assignment, concluding with Bruno’s suggestion that Lara needed a man.

“And that’s where you come in,” Clair eased into his deadpan punchline, which was so very Clair.  “We’re going to marry you into the Bossi fortune!"


Dining on perch at a lakeside restaurant, Fees reeled off a dozen more Cold War stories, with Clair jumping in, and I could only sit back in awe, a student of spy lore and tradecraft as taught by the best in the biz.

When serving in Yemen, Fees awakened to find his house completely surrounded by tribesmen on horseback.  Their leader turned out to be from Brooklyn, had come to Yemen years earlier to take over the tribe, and, feeling an affinity for Fees, offered his army for hire; for the right price, they’d take on whomever the CIA wanted them to fight.

The real story wasn’t today’s CIA, which, listening to them, one would believe had been over-bureaucratized and emasculated.

The story was Clair’s Net—a worldwide network of former operations officers, many of whom had run large stations—first generation spooks, the smartest of their generation, who had been wined and dined and wooed in style to join the agency (the way they used to do it), and who could look back only in dismay at what their old shop had become.

Harry Schultz was staying temporarily in Lausanne and wanted us to come see him.

So we trained 65 miles to the other end of the lake. 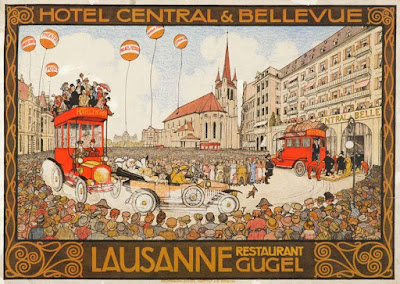 Arriving, like good spooks,  an hour early, we appointed ourselves at an open-air café outside Hotel Central, read newspapers and sipped hot chocolate.

Mega-millionaire Harry looked like one of the mole people that live beneath New York’s subway system as he crossed the boulevard toward us.  He wore several layers of ragged, mismatched clothing, and carried a plastic bag on either arm.

“I got a new hearing aid,” said Harry.  “Sit anywhere you want.”

When Harry opened his mouth, I noticed that he’d had a lot of gold put in—probably to replace mercury filling, or maybe because he thought it was the safest place to keep it. 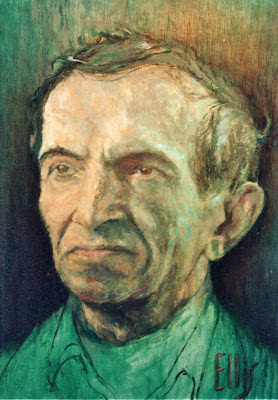 Harry was happy because, a few days earlier, his psychic had told him his most important work was yet to come.

The psychic convinced Harry that it was his destiny to create the final economic formula that will save mankind.


Harry was now waiting in suspense for the formula to occur to him.

Harry then revealed to us that the world as we knew it would cease to exist in 1997.  California and Great Britain would be gone—swallowed by the ocean after several earthquakes.  Many other parts of the world would suffer the same fate, he added.

Clair leaned in, cupping a hand around his mouth conspiratorially, as only Clair could.  “What about Washington?”

“Are you still interested in UFOs?” I asked.  The last time we talked, Harry wanted us to track down aliens from outer space.

“Uh, yeah,” said Harry.  “You know, they’re among us.  That’s what the psychic told me.  You’re supposed to say to new people you meet:  ‘Are you a walk-in?’  That’s what they’re called, walk-ins.  But I suppose they would deny it.”  Harry thrust two copies of his current newsletter at us.  “Look at the centerspread,” he commanded.

“What do you think?” snapped Harry.

Harry sat back in his chair, beaming.

We moved to another table for lunch, overlooking Lausanne’s train station.

“I still think you’re wrong,” Harry admonished, “for not doing anything about Loony.”

“What did you want us to do, break his legs?” I asked.

Harry did not answer.  That’s exactly what he wanted.

“Our objective was to get him off your back,” I reminded, “not incite him further.”

Clair and I bid him farewell (we’d never see him again) and found a train going our way.

As we glided the rails back toward Serene City, I scrutinized Harry’s photo-spread.  The caption said they were snapped at a G-8 meeting in Brussels.

“Look at this.”  I held it out to Clair.  “Tell me if I’m wrong, but I think the only real person in these photos is Harry.”

Clair rubbed his eyes, straightened his glasses and looked hard at the photos.