Posing as a reporter, Art had interviewed the mayor of Biggleswurm, and the baron’s own father, who had much to say about a do-nothing son he evidently loathed.

Art had also collected a smattering of local newspaper clippings pertaining to his target.

As with Harry Schultz's tormentor, Clair and I concluded that the best way to find out what Biggleswurm was up to would be to befriend him and become an essential element in his life.  An insertion operation is much less expensive—and far more elegant—than round-the-clock surveillance.

Clair called it “weaseling your way in.”

For Clair, most secret work involving influence or manipulation was based upon creating illusions.

Case in point:  To influence the population of an African village to behave a certain way, frighten them with a river of blood.  Idi Amin would slaughter a thousand people to create such a scenario.  The CIA would use red paint—and probably get blamed later for slaughtering a thousand people.

Art's intelligence provided all I needed to know to create an illusion for weaseling my way into the baron’s existence.

I picked up my phone and touch-keyed the number of Biggleswurm Castle.

“May I speak with Baron von Biggleswurm?” I asked.

“Yaa.  This is me!” he blurted, excited, it seemed, to receive a call.

I told Biggleswurm my name.  “I am a book publisher,” I said.  “A friend of mine in Germany sent me some newspaper clippings about you.”

“Yes.  You were in Dubrovnik recently, right?  You were the only musician to show up for a music festival while war raged everywhere.  They called you a hero—and you said, Bach brings peace.”

I held my breath.  The next moment would decide the future of this operation; you get but once chance for a cold-call insertion.

“And very good words they are,” I said.  “Perhaps even the title of a book about bringing peace through music.”

“You could write such a book yourself?”

“Marvelous,” I said.  “Could we meet in Paris next week?”

I, of course, already knew from Art Stimson that the French capital was Biggleswurm’s favorite European city.

“Yaa, I must be in Paris also.  I am very enthusiastic about this project.  Where shall we meet?”

I caught a jet, not to Paris, but to Nice, and whizzed by taxi to my client’s villa.

Countess Bossi descended her marble staircase and greeted me in the foyer, poured a Bitter and sat me beside her on the sofa overlooking her beautiful garden.

“I’m going to have lunch with your ex-son-in-law in Paris tomorrow,” I said straight out.

The countess reacted with stunned silence.

Then she grasped its ingenuity and gleefully clasped her hands.  “Magnifico!”  Her expression turned to trepidation.  “You know, he’s a very smart man.”

Odd, how the baron went from "village idiot" to "very smart man."

I plucked a business card from my wallet and handed it to the countess. 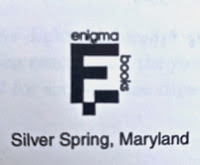 “Enigma Books,” she enunciated each syllable.  “I love it. But if he calls these numbers?”

“He will reach Enigma Books, where they will confirm I am a book publisher.”

Exhilarated, the countess led me to the Plate Room—the late count’s favorite—featuring 100 blue and white china plates affixed to the walls, each lit with its own light bulb.

“I have a little surprise for you,” she said, eyes twinkling. “Do you like truffles?"

A white-gloved servant appeared with a fresh truffle the size of a tennis ball.

“These white ones from northern Italy are especially rare,” she said.

The servant shaved truffle (a gourmand’s cocaine) onto my ravioli, the best I've ever eaten.

Next morning, I flew to Paris and checked into Le Bristol, not a moment too soon (my flight had been delayed due to fog).

Five minutes later, the concierge rang to announce one Baron von Biggleswurm in the lobby.

One last look in the mirror.

Downstairs, I played my role as publisher and Biggleswurm played his role as batty old aristocrat, wearing a bold pinstripe double-breasted suit with cuffed sleeves (“my own design,” he said) and two-toned wingtips on his feet.  A colorful silk handkerchief drooped flamboyantly out of his breast pocket.  Oval-shaped granny specs dipped down his Hanoverian nose, maturing him ten years beyond his age, an image he cultivated for himself.

The baron asked about my publishing house.

But he was only mildly interested in what I had to say about the beauty of independent publishers versus conglomerates.  This was politeness, until the opportunity arose to talk about his favorite subject:  himself.

Once started, he didn’t stop.

In fact, Biggleswurm had so much to tell me about himself, he had trouble organizing his thoughts, and so he shot his rather large wad in fragments:

He was a philosopher, had lectured philosophy at the University of Heidelberg.  He had just broken bread with Gorbachev.  He was a musician, a cellist—one of the world’s best.  He was a writer.  Not yet published, no, but this was because he had not yet found a publisher worthy of his genius.

I listened, nodding with enthusiasm.

Biggleswurm gestured with his arms in the direction of the dining room.  “Let’s have lunch.”

He wanted to be wined and dined and fawned over by white-jacketed servers.  No better place for this than Le Bristol’s dining room, whose waiters and sommeliers vastly outnumber patrons.  They draped fine linen on our laps and placed menus in our hands. 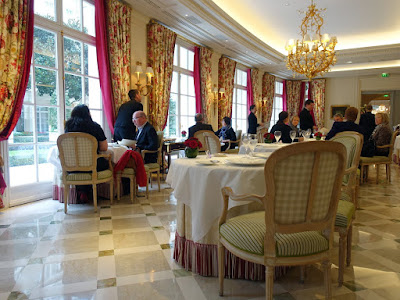 Biggleswurm mumbled something about his delicate digestive system; he ordered a carrot and tomato salad, stressing more than once  that the carrots be shredded, followed by filet of sole.


I insisted the baron choose a bottle of wine to his liking.

He ordered pouilly fume, and when it arrived I complimented him on his exquisite taste.

Then I asked the baron to tell me about his life.

“Start from the beginning,” I suggested.

He did not have to be asked twice.

Eventually he got to the part about his “bad marriage” and how it resulted in a son he could only visit several times a year.

He claimed his ex-wife had gone off the deep end, influenced by Far Eastern religious “cults,” such as Buddhism…

(A principle of sting-undercover, as taught to me by Walt Perry, a sting specialist for the IRS:  If you let people talk, without trying to guide them, they usually get to what you want to hear.  In Biggleswurm’s case, we got there a lot sooner than I expected.)

I shook my head in dismay.  “Custody battles are sad.  How does the future look?”

“I’ve lost my enthusiasm for the legal fight,” said Biggleswurm.  “But I might try to change the jurisdiction to Germany.”

And then he told me something that rendered our client’s main worry needless.

Past and present exhausted, the baron charged into the future.

He was unhappy at his ancestral castle in Germany because his village was beneath his dignity.  He said he had returned two years earlier “to try to make something of it,” but it wasn’t working.

“Germany is too materialistic,” said Biggleswurm.  “And I’m anti-materialism.”

Served sorbet between courses, I realized this would be a ridiculously expensive lunch rather than just an expensive one.

This was not lost on Biggleswurm; he had carved a whole career out of sponging ridiculously expensive lunches.

By this time I was scribbling in front of him.  There was just too much information pouring from his mouth to remember.  I did this with the baron’s permission.

Indeed, he felt complimented that someone should wish to note his pronouncements.  If anything, it egged him on.

“Where would you go if you left Germany?” I asked.

“In the midst of France,” he replied.  “Or a southern European island.  But it would not be until a year from now.” 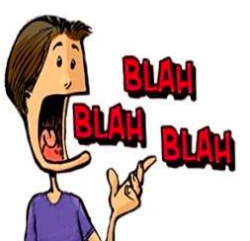 Biggleswurm continued to chatter while I tried to enjoy my filet of sole.


Instead, I nodded, caught his eye, occasionally smiled and otherwise pretended to be an enthusiastic listener.

“If you are looking for intellectual clichés, that’s not me,” the baron admonished, arching his eyebrows.

At this point, I seriously considered pushing my chocolate mousse into his daffy face.

Having earlier trounced his ex-wife’s spirituality, Biggleswurm turned to his own spiritual affectations over dessert.

“A few years ago in Paris,” he whispered, “I was at a recital given by an elderly Russian pianist.  After he played, we shook hands and talked, and he said to me, ‘You are going to write a book that will be a big success and go all around the world.’  Yaa, he said this."

I had become the baron’s destiny, in addition to becoming his new best friend, a phrase I learned from Clair George.

(As an intelligence officer, when you want to recruit someone, you become that person’s new best friend.)

Biggleswurm wanted me to instruct him how to proceed with the masterpiece he would write and I would publish.

“You need to write a proposal,” I said.  “Fifteen to twenty pages.”

“How about three or four?”

“Start with three or four,” I replied, agreeably.

I signaled for a check.  After the waiter disappeared with my plastic, the baron made a lame attempt to share the tab.

We shook hands in front of Le Bristol.

“I had no idea you were such a fascinating person,” I said.

Upstairs in my room, I dialed my client’s number and she answered.

“I just had lunch with your ex-son-in-law.”

“You have no need to worry anymore,” I said.

And then I dropped the major revelation that should have dispelled all worry:

Biggleswurm had remarried and his new wife was pregnant.

The countess gasped and, after a moment, said, “Poor girl."

“Which means,” I added, “he’s not running off to South America—or anywhere for that matter. Problem solved.  You don’t really need us anymore.”

Nothing doing, said the countess.

She wanted the spymaster and me to keep the ruse spinning.