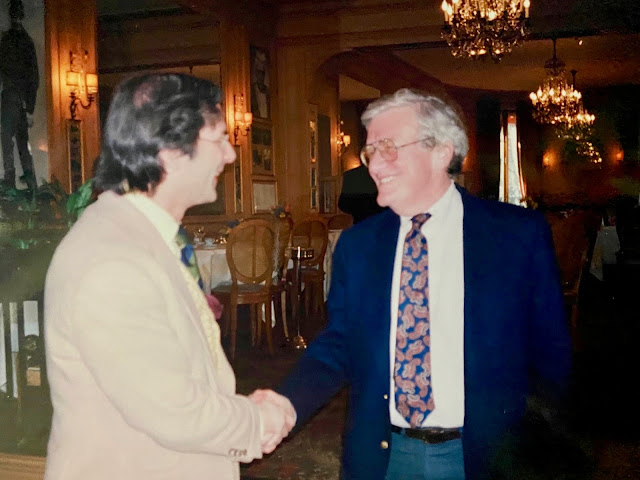 Clair had to meet the baron to believe him.  But even after he did, he didn’t.  Not that it mattered.  We were both capable of entertaining crackpots.

It took two months for the baron to write a book proposal, and when he did, and wanted to deliver it in person, the countess was delighted to spring for Concorde to get the spymaster and me to Paris.

I tried to pack a garment bag as light as Clair’s.

He carried a light nylon bag that looked and felt empty.  But from it he pulled a week’s supply of shirts and trousers, a suit, underwear, etc.

This bag, he checked in.  In his other arm, he carried a cabin bag of no discernible origin, ready to disintegrate from seven continents worth of fatigue.  In this he carried a toilet kit, a sweater and an ever-present paperback book.

While traveling, he wore a navy blazer, khakis and cordovan loafers, along with the indestructible Burberry raincoat that had traveled the world with him on numerous covert operations.

And like the good Boy Scout he once was, Clair was never without a vintage Case & Co. horn pocketknife (from the look of it, the same one he carried as a boy).

On the plane, he removed the blazer and put on his sweater, and then he read, read, read, unless we chatted, and when we did, he was always fascinating.

In contrast, I over-packed.  I’d wear blue jeans, shirtsleeves rolled up, a blouson aviator jacket and sunglasses dangling around my neck, often unshaven.

I packed as light as I could for this trip, but my stupid bag still bulged heavy.  Clair the magician had beat me again.

“How do you do it?” I asked en route to Reagan-National for our connection to JFK.

He shrugged, and we cruised through Rock Creek Parkway toward the airport perusing newspapers.

News item:   Rabbi Schneerson, the ninety year-old head of the Lubavitches, a Hassidic sect, is expected to proclaim himself messiah.

Our supersonic aircraft left its gate in JFK at precisely one p.m. and strutted like a peacock to the runway, jumping a queue of eight other airplanes. 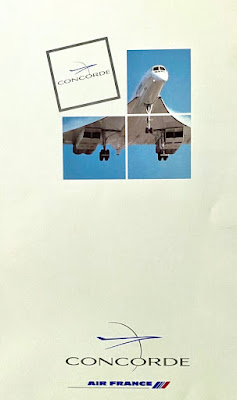 Here’s what happened when that sleek bird took off:  You went fast, very fast, and almost straight up.  Within 30 seconds you’ve already leveled out—temporarily—at 30,000 feet.

After you reached Mach Two, twice the speed of sound, top-shelf champagne arrived with a tray of canapés:  caviar, shrimp and foie gras.


The caviar turned serious over a second glass of bubbly:  a whole jar of Oscieta, served with blinis—plus a dish of cold lobster meat marinated in a piquant sauce.

After that, filet mignon, accompanied by vintage Bordeaux. 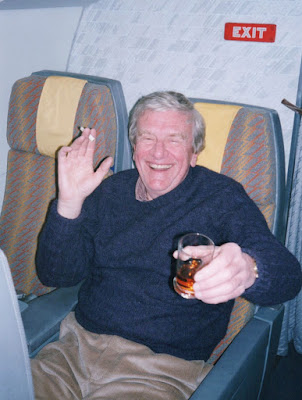 Snifter in hand, Clair found his niche in an aisle seat on his own to smoke a cigarette.  That’s where I caught him with my camera, cigarette in one hand, snifter of Armagnac in the other, with a huge ear-to-ear grin.

The pilot announced our descent into Paris-Charles de Gaulle.

Neither of us wanted this flight to end after just over three hours.

We came in so swiftly, I only knew we were landing when the tires thumped the ground.  And then another pleasure:  a mere 30 steps from cabin door to taxi rank.

Clair and I checked into Hotel Lancaster near the Champs, marveling our presence in the French capital—now, late in the evening. 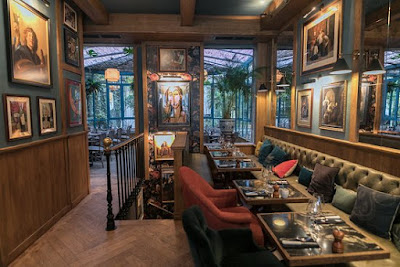 We found a comfortable wine bar, L’Excluse, to perpetuate our comfort zone with a midnight snack.  Clair had charcuterie, for me, a cheese plate with sliced apple; and red wine, though Clair finished with poire liqueur.  We crawled back to our hotel.


Next day, Baron von Biggleswurm appeared punctually at noon in the Lancaster’s lobby wearing mixed plaids beneath a flannel coat. We took a pair of overstuffed chairs and waited for Clair to come down.

The baron told me he had taken an apartment in Paris for one month, “for inspiration,” he said.  “I haven’t been sleeping,” he added.  “There’s a vibration that keeps me awake.”

“Always?” I asked with whimsy.

Clair, I told Biggleswurm, was my biggest investor; we had come to Europe to meet UK publishers—and crossed the channel especially to see him.  I’d organized lunch at fashionable Fouquet’s on the Champs, so off we went by foot. 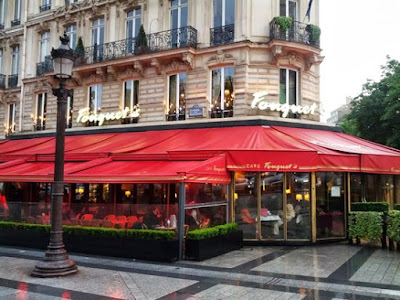 Offered an aperitif by an attentive server, Biggleswurm hesitated not a moment.

He announced proudly that he had written a two-page proposal and that three other publishers were now interested in his work.  However, he added, he’d stick with me because it was I who had discovered his genius.

I had already seen Biggleswurm’s proposal, which he had faxed to me a few days before.

It could have been used as evidence to have him committed to an asylum for the mentally insane.
My favorite line:

Our creative and artistic horizons may have been expanded by modern abstractionism, which mirrors the disintegration and deformations of the modern age, but it also revalued the artist’s original conception in an unnatural manner and distorted artistic representation to an extreme degree.

Clair had read this, too, had shaken his head, commenting that Biggleswurm was either a mad genius or a nutcase.

I offered odds on the latter.

The baron’s outline boasted six chapters, including one near the end titled Genius Points the Way, the presumption being that he was the genius, pointing the way and teaching the masses, unworthy though they were, how to achieve a contemporary renaissance—the book’s new theme.

A few days earlier, over the phone, I had lauded it as  “Brilliant!”

“Yaa, yaa!” Biggleswurm bubbled with glee in agreement.  “It’s good, no? I knew it!”

So now, here at Fouquet’s, we were going to spoil a perfectly good filet of sole by listening to the baron fill it out orally.

I placed a mini-cassette-recorder by his plate.

“Well, you see, culture is universal,” Biggleswurm began, slowly at first, trying to find his footing.  “And it’s de-material.  And it refers to basic criteria of creativity.”  The baron picked up speed.  “Therefore, anything to do with the significant impact of influence throughout history has basically been borne out of creativity.  The cultural aspect of a human dimension…” and then Biggleswurm launched, spluttering logorrhea as Clair and I tried to avert eye contact with one another for fear we would explode into uncontrollable laughter.

Five minutes later:  “…because I think one of the main problems is all forms of rules within the refrain of the existentialistic ideas, have imposed restrictions…”

“How true, how true,” said Clair, before deftly redirecting the baron to talk about his personal life.

“Ah, she poisoned him so much,” said Biggleswurm, referring to his ex-wife and son.  “Distorted psychological analysis—all artificial.  And now it has to be all undone.  I spoke to a lawyer, but I don’t want any lawyers.  He has to be taken out of that life.  He is raised with the most banal, vulgar features of our society.  He has to be protected.  His mother is mad. The only way to do it is outside the law.  If I find a way to take him away, I’ll do it.”

The baron told us he planned to return to Dubrovnik in July for another arts festival.  I asked if he intended to take the boy with him.

“Let’s move on to your next chapter,” I said.  “The Unseen Rape of Humanity.”

“Ah, this is the very cornerstone of existence,” said Biggleswurm, poised to unleash a new stream of claptrap.  “All methods, which abolish the real criteria of the ethics… essential feature of humanitarian orientation within which diminish mankind in his pretension of humanity… which is basically abolished in that context…”

The baron continued to order glasses of champagne as he reached new depths of flatulent psycho-babble.

I got up to relieve myself, and I laughed out loud all through a long pee.

When I returned, Biggleswurm was talking about his son again, as choreographed by Clair, a master at relieving people of their secrets.

At one point, the baron leaned over to Clair, tapped him on the arm, and pleaded, “Will you help me get my son back?”

Clair assured him he would try and looked my way.

“We’ve got to do something about his son," Clair told me sternly, keeping his face straight.  "He’ll never be able to write with that as a distraction.”  He turned to the baron.  “What, ideally, would you like us to do?”

“I want to take him somewhere,” said Biggleswurm.

And that’s why the countess was paying us big bucks and flying us twice the speed of sound to Paris to dine at Fouquet’s.

Back to the book, to Genius Points the Way.

“I have a multitude of propositions,” the baron blustered, “to give an introduction to the responsible leading society of this world to replace the habits of so-called automatic procedures…” and on and on through yet another glass of champagne.

I paid the bill and we parted on the Champs.  Biggleswurm headed east; we crossed the street.

We laughed.  But it wasn’t over yet. We still had a perfectly good dinner for him to spoil—this time at a restaurant of Biggleswurm’s choosing, Café Artois, destined to give me food poisoning.

The baron brought his new wife, only 24 years-young, bright and blonde, and very pregnant.

When we sat, Clair deftly moved in on her, as he had no desire whatsoever to converse with the wacky baron.

But I intercepted Clair's maneuver and pushed Biggleswurm his way and debriefed the pretty wife myself.

She told me had met Biggleswurm 18 months earlier, soon after writing him a fan letter, to which he had responded by suggesting she visit him.

I overheard the baron refer to his former in-laws as “mafia.”  Then he mentioned our countess by name and, with a wave of his hand, dismissed her as “a common concierge.”

Dismissals of this sort came easily to the baron.  He had already, at lunch, dismissed his brother as “insignificant,” his sister as “a nobody,” and his parents as a pair of old geeks “with whom I rarely bother.”

Over dinner, Biggleswurm began to push for a publishing agreement—a contract to formalize our arrangement.

This gave me the opportunity to invite him to visit Washington, D.C.

Clair loaned support to my suggestion, and this was good, because the baron had become hypnotized by the spymaster’s every word.

“I will come to Washington,” declared Biggleswurm.

We agreed he should visit the following month.

The baron made a feeble attempt to pick up the check (it was, after all, his invitation), but I paid, earning me a bear hug from him before we parted.

We were now in a position to monitor the baron’s actions and to influence them; to know what he was doing, thinking, and thinking of doing.

Additionally, our ruse focused Biggleswurm’s mind on a book he believed he would write (and set the world alight) instead of fixating his considerable spare time on warring with his ex-wife.

Posted by Robert Eringer at 8:09 AM