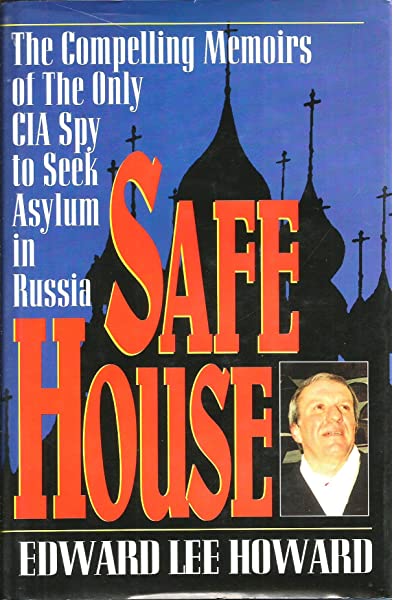 It was cold in Geneva, just above freezing. Snow flurries interspersed occasional sunshine.

Edward Lee Howard arrived at noon sharp for our rendezvous in the Noga Hilton lobby, a contemporary lounge decorated in black leather and chrome.

Howard had gained weight, maybe 15 pounds, since our meeting in Zurich five months earlier.  His mood was glum and downbeat. And his face was swollen; symptomatic, I thought, of heavy drinking.

He'd given up smoking, he said, and the absence of nicotine appeared to have taken a toll on his nerves.

Howard told me he'd traveled by train the day before from Interlaken, where he'd spent a week in a rented apartment with his wife and son.

No phone, no TV... he bitched that he'd never do it again. 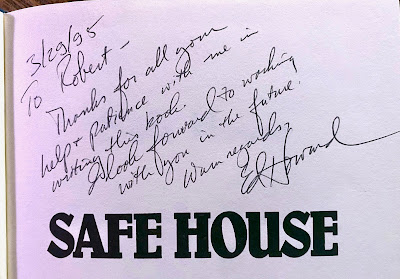 I'd brought with me a half-dozen advance copies of Safe House, hot off the press.

Howard  set to work signing books to me, Joseph, Sultan, and even one destined for John H., his FBI pursuer. 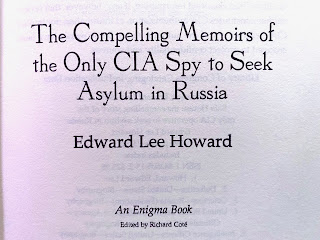 My own mark, An Enigma Book, graced the title page.

Howard voiced unhappiness with the cover over the photograph of himself; he felt it did not do him justice.

Next order of business:  Spy’s Guide.

Howard was full of beans on this project.

Moscow was three-quarters done; he'd been to Vienna on business a few weeks earlier and knocked that one out.

He'd decided not to do Budapest himself (as if he'd been warned off  "Bear" Bryant's first choice for a rendition), but sub-contracted to a KGB officer on site.

Geneva he would do this very week.

"This is truly a spy's city," said Howard.  "The Swiss don't care what spies do here as long as there is no public scandal."

Howard had also decided to delete Belgrade and substitute it with Bratislava, which, he said, was "a good town for covert operations."

"For years," said Howard, "the KGB considered Bratislava an ideal town for a spy on the run who wants to keep a low profile, hide cheaply, and be able to escape to one of three other countries by land within the hour.  This is where they used to sneak me across the border into Western Europe as a Soviet diplomat."

We moved into lunch at Tse-Yang, a Chinese restaurant on the Noga Hilton's mezzanine, and over steamed dumplings we explored the new book project Howard had cryptically alluded to over the phone.

"Once my book got cleared, there were some excited, very impressed people in Moscow," explained Howard.  "I got called to a meeting."

"Vladimir Kryuchkov [the former KGB chairman].  He summoned me to meet him in a public park."

"Because Kryuchkov is under surveillance by Boris Yeltsin's people," said Howard.  "He didn't want it known he was meeting with me.  He was with two others:  Igor Batamirov..."

Howard nodded.  "An old friend of mine, Ames’s handler.  And Igor Prelin."

"A former KGB colonel," said Howard.  "Prelin is general-director of the former intelligence officers association. They want to generate works for the Western market.  The first one is Kryuchkov's book.  It's already written."

"No.  Russian.  It'll soon be published in Russia.  My friends are using their influence to get that stupid jerk Yeltsin out of office."

"So send me Kryuchkov's manuscript," I said.  "I'll try to get it translated."

After lunch we strolled the Quai des Bergues and ran into Howard's wife, Mary, and his son, Lee.  The four of us popped into the bar in Hotel des Bergues for refreshment.

Earlier, over lunch, Howard mentioned he was glad to live on his own without family pressures. Now, Lee reflected sunlight off his wristwatch into his father's eyes to irritate him.

I pointed out that the bar in which we sat deserved a mention in Spy’s Guide because it had no fewer than seven ways to get in and out.

Howard chuckled, "You could sneak out without paying."

Lee chirped up. "You did that once, dad!  Remember?"

Howard blushed, suggesting it was true; an awkward silence ensued.

Later, after his wife and son had left us, Howard produced his outline for Spy’s Cookbook.

This manual, Howard wrote, will walk a would-be turncoat through the basic steps of making a decision to steal and exploit secrets, contacting potential buyers, communicating securely with them, and what to do if caught.

Selling one little secret is an irreversible step!  There is no such thing as being halfway pregnant.  Likewise, there is no halfway point in espionage.  You gave out secrets or you did not.  It's that simple when the jury meets.  You can't plead extenuating circumstances.

Your decision should be made in a cold and calculating manner.  Look at the actual costs (operational expenses), potential life-long costs of being caught (jail or being beaten up), and finally the benefits.

Have a plan for a drastic change of life within a specified period of time.  It's like playing the stock market.  You don't buy into the market thinking it will always go up.  You buy at a good price with a target sale price based on analysis.  The same way with espionage.  Think of it as a short-term business project with some prospect of profit and good prospect of risk.

Four rules for making the approach:

1) Assume the place you might want to make contact with is watched and bugged.  Leave the car home, never use the phone, use disguises;

2) Make an untraceable offer.  Verbal, one-on-one, in an anonymous location;

3) Have a plausible excuse (to would-be watchers and interrogators) for making your approach, a credible legend with back-up documents;

4) Take your time and be patient.  Wait for your opportunity, never rush.

Your dealings will require special forms of payment.  The best way is cash or a deposit in a secret account.  If they want a receipt, never sign your real name.  And unless your spouse is vital to the success of the project and takes equal risk, make every effort to keep your mouth shut.

If caught, don't even give the time of day.  Make accusations against the police for false arrest.  If you're part of a minority, make that an issue, or paint the case as a political frame-up.  If you are really careful and do not confess, your chances of leaving jail are good.