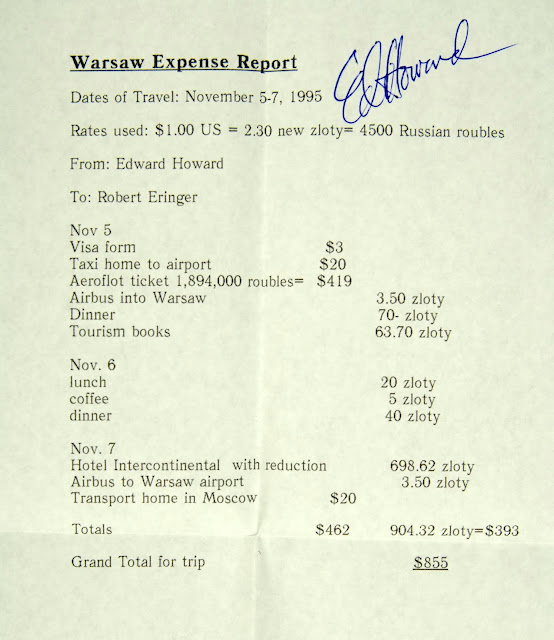 During the first week of June, ten weeks after my trip to see Edward Lee Howard in Geneva, I met FBI Special Agent John H in Chicago.

He greeted my United Airlines flight from Washington, D.C. and escorted me to a small conference room in the bowels of O'Hare Airport.

I had traveled to Chicago to loan moral support to National Press Books' launching of Safe House by Edward Lee Howard at the American Booksellers Association's annual convention.

Joseph and Sultan joked sourly that its poor showing must have been due to a CIA-plotted conspiracy to bury Howard's book, which, in any case, had all its classified information excised out of by the editor (me)!

Meantime, John H and Bob G had solved their evidentiary crisis by dragging Howard's wife, Mary, before a grand jury in Albuquerque to question her for the first time in ten years.

Bob G had finally found a legal loophole that forced her to testify against her spouse, and this time Mary incriminated Howard for laundering cash received by the KGB.

When Howard heard about this development, he assumed it was a retaliatory FBI response to the publication of his book, and he responded with outrage.

"Once again, they're taking it out on my family," Howard ranted to me over the phone.  "Mary has to tell them what they want to know to keep herself out of the can.  It doesn't matter, because they can't get me anyway.  That's our strategy."

John H told me otherwise:  When Howard learned that his wife had been spilling her guts, he demanded she send him divorce papers, suggesting he'd only stayed married to her in an attempt to prevent damaging spousal testimony against him.

U.S. Attorney Bob G now had what he needed to prove his espionage case.

It was time to press the top brass at the Department of Justice for a green light to reel Howard in.  Especially as we now had him poised to travel to a handful of convenient destinations.

For the benefit of a senior Chicago FBI Special Agent who had laid on the logistics at O'Hare, John H detailed the mechanics of how our extraordinary rendition would play out:

Howard would arrive at the airport of our designated location.

At Immigration, before officially entering the country (a no-country zone known as an international corridor), Howard would be asked by Immigration officers to "come with us."

They would escort him to a room situated in a limbo known as no man's land.  John H would be waiting there to make the arrest.  He would then escort Howard to a U.S. military jet for a stealthy flight home.

By this time, I had received from Howard a proposal, in English, of what the former KGB chairman Vladimir Kryuchkov would write.

It was wonderfully enticing.  This I passed to John H.  He was equally intrigued, but remained focused on Howard.  And why not?  We were getting so close, he could practically taste victory.


On July 1st, I decamped to Stone Harbor, New Jersey for a lengthy summer vacation by the beach.

John H phoned on the 17th to report excellent progress with the Justice Department.

We honed our target capitals.

Then John H got summoned to Washington to present a final plan to the Big Cheese Family.

He told them this:  Choose from three destinations (Warsaw, Bucharest, Sofia) and we can nail Howard in six weeks.

We already knew the techniques and mindset Howard maintained for low-profile foreign travel.

Because Howard had penned a blueprint for me: A detailed chapter on tradecraft for the traveling spy!

Plan where you're going.  Know the area... check out the establishment you want to meet somebody ahead of time, find the exits, learn the operating hours, and always think about how your opposition would approach you if he found you were there.
Make your travel reservations from a public phone, with a travel alias, use smaller foreign airlines (KGB officers always prefer using Mavel, the national Hungarian airline), pay cash for your tickets, change planes.

Spend a day or two in another city checking for shadows before going to your target area, make hotel reservations at the last possible moment.  And once in a hotel, always approach it as if someone may be waiting for you.

Combine a different hairstyle with a pair of glasses and you'd be surprised how much your appearance changes.
You just can't trust anyone.  No one said it would be easy to be a spy and this is one of the reasons why.

John H phoned me from Washington on July 26th.

Headquarters had trashed our list; the Department of Justice wanted Milan or Rome.  "What's your immediate thought on that?"

"Bollocks," I said.  "The Author may never visit Italy. And if he does, it wouldn't be for many, many months."

John H told me a new agent had been assigned the case at Headquarters, replacing John Q.  He said we should all meet, and we agreed to rendezvous in Pennsville, New Jersey, my side of the Wilmington Bridge.

John H put his new supervisor, Chris H, on the phone for directions.  I had no idea where exactly we'd meet, so I planned to arrive first, stake out a decent site, call Chris H's cell phone.

I arrived at 2:55 p.m. and settled on Chukkers, a tavern.  It just sounded right.  And desolate of other customers at this post-lunch hour.

John H got right down to it:  Bucharest and Sofia had been ruled out by the Department of Justice.

It was down to the Bureau's legat at the U.S. embassy in Warsaw to deal with the Polish government, gain their acquiescence.

Chris H expected an update on his cell phone any minute.

Chris H perked up from his frosted mug of Coors Lite.  "Istanbul might work."

"I could fit it into the context of Spy’s Guide," I said.

I could only place my hand over my eyes and shake my head in dismay that the new supervision from Headquarters had not been fully briefed on how we got to this point.

When we finished, about 5 p.m. we walked into the 100-degree sauna outside, shook hands, said goodbye.

As I drove back to Stone Harbor through Salem, Bridgeton, and Millville, I felt only sadness in my soul.

It struck me that every time I and the FBI team came up with a new solution, the Justice Department threw up two new hurdles.

The threshold for approval was forever on the rise, as if the higher-ups, as in political appointees, just didn't want to go there.

Understanding that the FBI was clearly out of its depth on the potential of playing former KGB Chairman Kryuchkov, I kept Clair George apprised of this development.

At some point, he met CIA's Eurasia Division Chief for a drink to lay it out.

He  phoned me afterwards.  "I can sum this up in one word," said Clair.  "He was astounded."

"Did you explain how all this came about?"

"Is that what astounded him?"

"The whole thing astounded him!  He was astounded that he knew nothing about this. And he was astounded by having a key player like Kryuchkov in this position.  He can't believe the Bureau hasn't told CIA about it."

John H phoned me.  "Chris has been busy," he said, excitedly. "He's gotten a positive response on Warsaw."

Which meant were now on course to rendition Howard.

A six-week countdown began.  A CIA/FBI task force was created to finalize the arrangement.

Then John H was again summoned to Washington.

He phoned me from Headquarters (Wednesday, August 30th) and asked that I make a dinner reservation at O'Donnell's in Bethesda.

He was waiting there with Chris H and Jim S when I arrived just before seven o'clock.

A pall had been cast over the assembled G-men.

John H and Jim S explained that a "related conflict" had suddenly arisen at Headquarters.

Consequently, there was no longer a big hurry to rendition Edward Lee Howard.

Consequently, the operation to apprehend him in Warsaw had been scrubbed at the eleventh hour; postponed indefinitely.

“We've been put in a holding pattern,” explained Jim S.  "Maybe as long as six months."


Somehow, I wasn't surprised that all our efforts (money, time, energy) had evolved into a non-rendition. 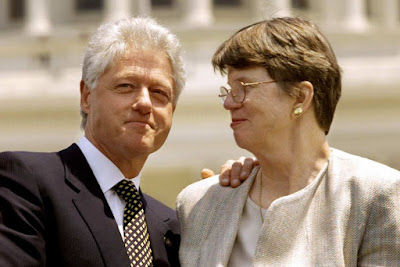 It seemed that, from the beginning, the notoriously politicized Justice Department never really had the gumption to go through with it.


They'd just been playing along, allowing everyone to spin their wheels, then, ultimately, shirking their responsibility. 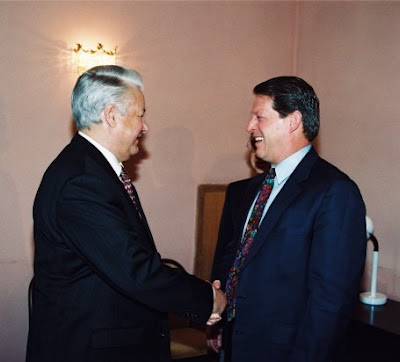 We had met every demand they’d ever made to legally justify a rendition.

But they scrapped it at the eleventh hour anyway, worried about embarrassing the Russian government even while corrupt Russian leaders were laundering billions of dollars, and the Russian intelligence services were taking advantage of eased tensions with the West by teaming up with organized crime groups and doubling its espionage efforts worldwide.

Put into perspective, U.S. Attorney General Janet Reno could order the killing of innocent children in Waco. But she couldn't allow the arrest of a traitor.

I later received Howard's expense report (the graphic atop this post).

Given the go-ahead, we would most certainly have arrested and repatriated Howard, an American traitor who crowed about being the only spy to have been taught tradecraft by both the CIA and the KGB.

The FBI would not only have got its man, but an example would have been set for anyone else thinking of selling out their country.


The boys from the Bureau asked me to "hang in there" i.e. keep Howard greased until such time that their "related conflict" could be resolved.

Meantime, we would carry on with Spy’s Guide and Vladimir Kryuchkov's book, and I would be given scope to cultivate PI (positive intelligence), as recommended in November by Bob Blitzer, the Bureau's counter-terrorism chief.

I knew then, in my bones, it was over; the Justice Department would never green-light the renditioning of Edward Lee Howard.

More time would pass, making it more difficult to prosecute this traitor for espionage, always a tough charge without an admission.


But I awakened next morning with a new appreciation for the silver lining beneath this dark cloud: 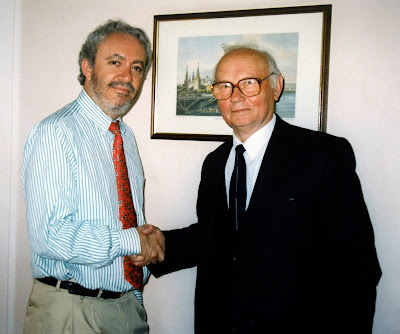 Posted by Robert Eringer at 9:06 AM