69. DOING MOSCOW WITH THE KGB CHAIRMAN


I was amused the moment I began reading Vladimir Kryuchkov's "chapter summary" for a book he wanted to title A Life Devoted to the Cause.

"I was in Stalingrad when the Great Patriotic War broke out in 1941," Kryuchkov had written.  "It was a hot summer day, June 22nd, and my dream had come true:  My parents went to town to buy me a bicycle.  As they prepared to pay for it, loudspeakers announced the star of war.  I did not get the bicycle."

It spoke volumes to me about this man; about his whole life:  He didn’t get the bicycle.

On page 84, Kryuchkov addressed the assistance CIA turncoat Edward Lee Howard had given the KGB:

"With Howard's help we were able to cut off channels through which information vital to the security of the USSR was being leaked."

The KGB's own former chairman admitting that which Howard had always denied!

So now I was managing two books side-by-side:

Howard's Spy’s Guide and Kryuchkov's memoirs, for which Howard was the designated point-man.

For more efficient commo with Howard, the FBI's computer whiz, Tom M, had set me up with the newest Compaq PC and internet capability for exchanging e-mail with Howard, and for receiving download material from him.

The Bureau's Russian translators had gone to work on Kryuchkov's manuscript.

I'd zapped Howard numerous e-mails for conveyance to Kryuchkov in which I urged the former KGB chairman to spice up his prose with revelations and anecdotes.

Kryuchkov promised to write material that did not appear in the Russian version of his book.

One year later, I was still waiting.

But it finally materialized, in January 1997.

Which meant time had ripened for a face-to-face encounter with Kryuchkov, in Moscow.

Which meant risking my freedom in service to the Federal Bureau of Investigation.

Meanwhile, unbeknownst to anyone (least of all the Bureau, in denial about such things), a senior FBI counterintelligence official based in headquarters was sending everything he could get his hands on to Moscow.

In Russia, the going rate for espionage is 20 years in the can.

But operating undercover is akin to drinking a DMT-dopamine-oxytocin-adrenaline cocktail.


The idea was to pump the former KGB chairman with questions about spy riddles the FBI hoped to solve.

FBI Russia specialists supplied me with a shopping list:   Subjects I would broach, ostensibly to "improve" Kryuchkov's dead horse of a book; questions designed to shed light on past spy cases and other unresolved issues.

For his part, Special Agent John H wanted an update of Howard's doings and state of mind.

As my Swissair jet neared Sheremtevo Airport, the clouds thickened, then darkened, and what had been a smooth cruise now became rocky and uncertain;  I listened to the soundtrack of Russia House on my Walkman as we bumped clouds into a final approach.

This time Customs was a breeze, but no Ed Howard waiting in Arrivals.

A dozen-plus cab drivers descended upon me, circling over and over again and like sharks sniffing prey.  (Choose the wrong driver and you'd end up mugged or dead.)  I found a wall for my back in the dark, cavernous terminal. 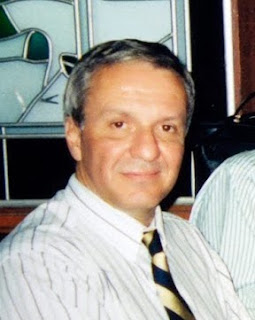 He took my bag and led me to his battered old blue Volvo; its odometer now clocked 106,670 miles.

Howard, dressed in a suit and tie, had gained another ten pounds since last we met.

As we drove, he ran through logistics:

Kryuchkov would arrive at my hotel at nine o'clock next morning accompanied by former KGB Colonel Igor Prelin, executive director of the retired intelligence officers association.

Prelin's last job at the KGB, explained Howard, was public relations chief.  Now he acted as front man for the old guard KGB-in-Exile.

Lena Orlova a.k.a. Larissa would be on hand to translate.

Howard said he would make the introductions, then let us get on with it, maybe return for dinner at Kryuchkov's home.

Howard had become a stock market analyst (from traitor to trader), affiliated with a firm called Rye, Man and Gor Securities.  As director of their analytical department, he was bullish on Aeroflot stock.

Howard told me he had visited Cuba two months earlier and was considering the purchase of a sea-front apartment in Havana.

"Come meet me there," he said.  "I'll introduce you to some Cuban intelligence people.  Who knows, maybe there are some books in it for you."

Don't mind if I do, new avenues of opportunity for intelligence collection.

Howard claimed to have worked out how to retire in five years based upon investments in the Russian stock market.

As such, he'd already mapped out his future:

Winters in Cuba, summers at a cabin on Lake Baikal, part-time consulting by fax and e-mail.

(Five-year plans are a Russian tradition that rarely succeed.)

Ninety-minutes later we arrived at my hotel, the elegant Baltschug Kempinski.

I checked into my room (310) and returned to the lobby for further chitchat with Howard.

I asked Howard if he wanted to manage money for new clients.

Damn right he did.  He could set up fiduciary accounts in Cyprus, said he; and, as some Russian stocks did not require conversion to rubles, he could buy and sell them in U.S. dollars.  What's more, he'd take only a 2.5 percent commission instead of the normal 5 percent.

"I'm close to the market," said Howard.  "I'm constantly on the phone to publicly-traded Russian companies to assess their activities."

"Sounds good," I said.  "Are you willing to travel to meet prospective clients?"

The FBI was still in a holding pattern on luring Howard to capture.

Twenty-two months had passed since we'd been frozen "maybe as long as six months."

Nevertheless, John H and I continued to scope out such opportunities in the event that we might one day get a go-head.

"Sure," replied Howard.  "I'm traveling widely."  But, he added, no talk of travel on the phone, fax or internet.

I suggested we establish a code to make secure commo possible, and we both made identical notes:

Always 12 p.m. in reception, one day past the date stipulated in communication.

Howard wanted to get into automobile insurance, which, he said, was virtually non-existent in Russia.

"What happens when cars collide?" I asked.

"The drivers fight it out."

So Howard had cultivated a relationship with a Moscow-based insurance company called Rose gal, 49 percent owned by the Great American Life Insurance Company.

Howard departed for a business appointment, and I retired to my room.

The view of the Kremlin and St. Basil's Cathedral was so precious, I opened the French windows and ordered room service:

(Everything priced in Deutschmarks, no Russian rubles accepted.)

On my desk I plopped a current copy of the Washington Post’s Sunday book section, Book World, a back-stopping of my legend should anyone pay a visit to snoop around while I was out.