At 6 p.m. on the dot I found Prelin in the lobby of my hotel.

He relieved me of a bottle of Ridge Geyserville, California zinfandel I had brought as a gift for former KGB Chairman Kryuchkov.

"I give him for you," said Prelin.

Prelin drove a BMW.  He told me he was born in Siberia, came to Moscow in 1966 for Intelligence School.  He worked five years in counterintelligence before joining the KGB's First Directorate, serving tours in Angola, Mozambique, and Senegal.

(On my return to Washington, my report to the FBI included Prelin's comment about running a CIA officer for eight years, allegedly one of eight CIA officers who died in the Beirut embassy bombing.  I suggested they determine whom amongst the deceased CIA officers had previously served in Angola, Mozambique, or Senegal, and where precisely they had been in 1977. I doubt they ever did.)

Prelin prattled on with pompous self-importance until we arrived at Edward Howard's apartment, though this arrangement was without logic, for Lena Orlova drove with Howard in his car and I got stuck with Prelin for company, at his insistence.

When we reached Kryuchkov's apartment building, Prelin instructed me to join Howard in his car.  He went up to fetch the boss.

Five minutes later, a chauffeur-driven Zhiguili pulled out with Kryuchkov and Prelin in the backseat.  We would not be dining in Uncle Vlad's apartment, as Howard had thought.

"Kryuchkov has a car and driver again," Howard commented.  "The Duma Committee on Security, run by the Communists, made Kryuchkov a consultant, and that qualifies him for a driver."

Howard cursed under his breath.  "These First Directorate colonels all think they're hot shit.  They all drive BMWs."

We followed the Zhiguili to Taganka, a Moscow suburb; parked in the lot of a restaurant called Fairy Tale.

Inside, the owners greeted Kryuchkov with great warmth.  They had closed the larger room of their restaurant to all but our party.

"This is K's favorite restaurant," Howard whispered to me.

Inside a dark dining room, a long table was spread banquet-style with three kinds of smoked Baltic fish and other appetizers.

Howard acted very blasé about the whole affair.  He could have cared less being present; had joined us only at Kryuchkov's insistence.

(An irony of post-usefulness syndrome, common to defectors once fully debriefed:  Now that Howard had become a hot-shot stock analyst, surfing the wave of new Russian capitalism, he appeared to have no further use for them.)

Although Howard did not seek the company of these old-guard KGB officers, he remained charmed by Kryuchkov's obvious affection toward him. 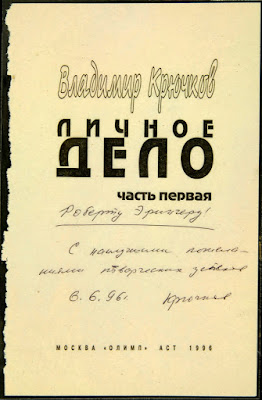 Kryuchkov gifted me with the two-volume hardcover of his autobiography, as published in Russia.  He autographed it with this handwritten message in Cyrillic:  "To Robert, Good luck with your creative successes." (!)

My new soundrel of friends and I ate by candlelight, and drank "Stalin's favorite wine" (said Kryuchkov), a Georgian rouge called Kindzmarauli. 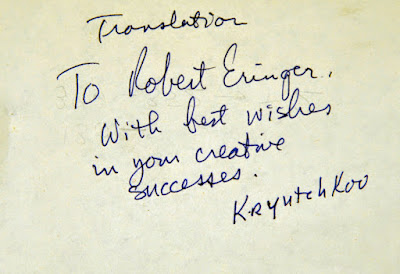 Talk of Joseph Stalin brought cheer to the former KGB chairman.
He recalled a special moment, in 1953, when he realized he stood only one hundred feet from the tyrannical dictator.

"It was the happiest day of my life," said Kryuchkov, a tear welling behind thick glasses.
It pleased him to report to us that a Stalin revival going on in Moscow.  Whenever Stalin's name was invoked at the ballet or the theater, said Kryuchkov, people broke into applause.

In contrast to his adoration for Stalin, Kryuchkov said he despised Nikita Khrushchev.

But, he added, "Khrushchev, to his credit, never would have tolerated Gorbachev.  When I go out, I have no bodyguards.  I walk the streets alone.  If people come up to me, they are kind and sympathetic.  But Gorbachev dares not step one foot out of his home without five bodyguards.  The people taunt him.  They throw tomatoes at him."

We agreed on a title for Kryuchkov's memoir.  Spy Lord:  Secrets of the KGB Chairman.

"What will Washington think," Prelin said to me, "when the Soviet Union reemerges?"

"Is this something you expect to achieve militarily?" I asked.

"No," Kryuchkov answered.  "It's what the people want."

"So you're going to re-unite through public referendum?" I said.

"Everyone seems to be in favor of big nation-states," I said, "like a unified Europe.  But just the same, I don't think I'd use the word Soviet if I were you.  Nor Union for that matter."  My tongue was planted firmly in cheek.  "Maybe you should call yourselves the Democratic States of Eurasia?"

Prelin concurred, while I struggled to keep a straight face.

"The problem," said Kryuchkov, "is that your country interferes with the popular vote."

"It's not right for your country to do this," added Prelin.

"Okay, here's what you do," I said.  "We have secession groups in Texas and California.  Alaska has a whole political party devoted to breaking from the federal union.  You should retaliate and give these groups your support."

"Ah yes!" Prelin lurched forward.  "We tell Vladimir Alexandrovitch (Kryuchkov) to do this [when he was KGB chairman]!  But he does not listen!"

And I'm sitting there thinking, What am I doing in this asylum?

Kryuchkov launched another complaint against the United States.  "You have too many laws," he said.  "So you're not free.  We did not repress people with laws.  So we had real freedom."

This was more surreal than a Salvador Dali painting.  I'd come through the looking glass and that's where I'd landed, at the mad KGB chairman's dinner party, as painted by Dali.

Then Prelin jumped into his greatest gripe of all:  The American IRS was now teaching the Russian government how to collect taxes.  Prelin complained that he had to pay "104 percent tax" on one of his projects.

I said I did not understand how this could be possible.  "You'd lose money."

"Yaa."  Prelin shrugged to make his point.  "But I make special arrangements, so it turns out okay."

Thankfully, the conversation reverted to books.

I explained that the spy genre was not doing well.  "Nobody cares," I said.  "Everybody in the States says the Cold War is over."

Prelin shook his head sadly.  “Yaa, that's what they say here, too."

The main course, small dumplings with meat (of what origin, I dared not ask), was served as we chatted.  Then dinner ended abruptly without offer of dessert or coffee.

Prelin had still not given Kryuchkov my gift, the bottle of wine.  I asked him about it.

Which meant, I suppose, Kryuchkov never got his bottle.

I mentioned this to Howard on the drive back to my hotel.

Howard shook his head; it was obvious he had no time for Prelin.

"He's like a student council president," said Howard.  "Plays his role as head of the former KGB officers association to the hilt.  He crashed my last birthday party."

Birthdays in Moscow had always been a bone of contention with Howard.

"It's traditional that all your Russian friends drop by," he told me.  "You're supposed to give them food and vodka."


With his tightwad character, this wasn't exactly Howard's idea of a good time. 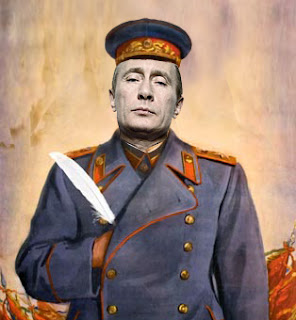 The civil unrest going on around the USA today is being orchestrated, in part, by the Russian SVR (foreign intelligence service).

Antifa is just their unwitting stooge.

The Russian and Chinese intelligence services, operating independently of one another, are doing everything within their power to ensure that the 2020 presidential election results are muddied and corrupted so that both sides will claim they were cheated.

These foreign powers are strategizing for a US Civil War II, which they hope will commence on 4 November or soon thereafter.

The most likely scenario:

Neither side concedes, both declare victory, battle lines are drawn; physical fighting in city streets will quickly escalate into battle zones that will make the ongoing riots seem like garden parties.

Putin believes the CIA dismantled his beloved Soviet Union and is hellbent on revenge.

His strategy is, and always has been, two-fold:

We are falling into his trap.

Posted by Robert Eringer at 8:49 AM