75. THE BARON COMES TO WASHINGTON 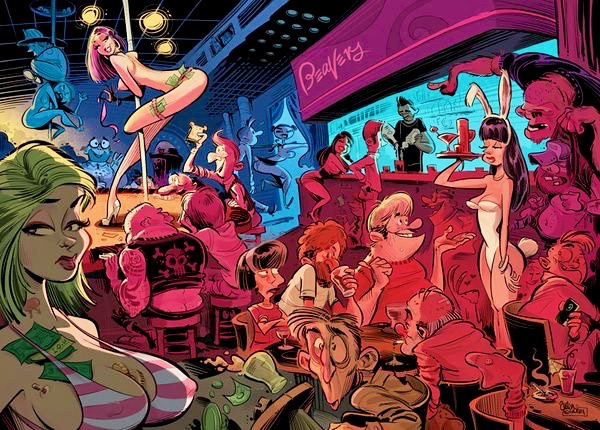 
We had baited Baron von Biggleswurm with a book deal.  Now it was time to reel him in—and cement our relationship on home turf.

The baron could not bring himself to discuss expense money for his trips, so he invented “Dr. Schoenfeld” for this.

I quickly deduced “Schoenfeld” was imaginary—a buffer for himself to deal with distasteful subjects like money.

I responded to “Schoenfeld’s” stern fax by saying I’d be willing to share the baron’s economy flight and pick up two nights at a Washington hotel.

My associate Winston flew in from the Midwest; it would be Winston’s role to bolster the project as “a producer of TV documentaries interested in your book.”

And so Winston and I drove to Dulles Airport in a heavy rainstorm to greet Biggleswurm.

We waited and waited.

I explained to Winston that the baron was a Mr. Magoo-like character who stumbled through life, would probably get lost, and, if found, would certainly be last out.

Indeed, he got lost.  And was last out.

When he finally appeared, an hour after everyone else on his flight had long gone, Biggleswurm looked as if he’d stepped out of a time warp—circa 1920—in a double-breasted plaid suit followed by a porter wheeling a large trunk with vintage hotel stickers pasted on it.

The baron’s plaids were loud, his sleeves cuffed, and when I complimented his good taste, he said he would introduce me to his Italian tailor across the street from Hotel Meurice in Paris.

I struggled with Biggleswurm’s trunk, which weighed a ton; his left hand was bandaged, so he could not help, he explained; two weeks earlier he’d fallen backwards in the garden and tore open his hand on a jagged piece of wood.

He said it took two-and-a-half hours for micro-surgeons to sew his veins together.

We drove, avoiding traffic; the baron declared his aversion to waiting in line.

“Lines are for everyone else,” said he.  “I never wait in line.”

Two minutes later, we were bumper-to-bumper, caught in rush-hour, thanks to his tardiness.

Biggleswurm asked Winston two questions, didn’t listen to the answers, and proceeded to yak about his favorite subject:  himself.

The objective, this trip, was to hammer home the illusion.

We were not only strengthening our position for monitoring the baron, but also wasting his time (he needed little help on this count), exhausting his resources, refocusing his energy and developing an emotional dependence on the book he believed he would write and bring the world to its senses.

He was already dining off stories about his bestseller-to-be, trumpeting to all who would listen that a worthy American publisher had recognized his genius and commissioned him to write a book that would transform the approaching millennium from “an age of mediocrity” to “a new age renaissance.”

During the drive into town, with no prompting from me, the baron talked about his son, saying he wanted the boy to spend an extra week with him at Easter and his ex-wife had refused.

“She’s giving me trouble,” he said.  “She makes everything so difficult.  I’ve had enough.”

I was pushing too hard, going faster than he wanted to go, so I pulled back.

Then the baron mumbled something about psychiatrists, about employing a couple of psychiatrists to assess the boy’s mental state, testify that his son was being brainwashed by cultists.

This, he reasoned, would justify holding the boy indefinitely.

Upon reaching the Georgetown Inn, Biggleswurm checked into his room. He found Winston and me at the bar 20 minutes later.

“I’m tired of Europe,” he announced.  “I need renewment.”

Our trio moved to nearby Nathan’s for dinner, more bottom-snorting from the baron.

“My son used to love classical music,” said Biggleswurm.  “Now he likes Michael Jackson—can you imagine?  That’s his mother and her cults.  She is brainwashing him.  And that school he goes to—much too free.”

His preference was an old-fashioned German boarding school, one that still featured cold showers and regular beatings for minor infractions.


Next evening, I ordered a white super-stretch limousine for a tour of Washington.

Winston and Biggleswurm fiddled with the TV and the sunroof while I dashed to the liquor store to buy a bottle of Dom Perignon.  We popped the cork and poured a round.

The driver swung onto M Street and we glided past the White House.

I instructed the driver to the newly renovated Union Station.

Passing a hat shop inside the train station, Biggleswurm strode in to primp himself in a variety of poses, finally deciding on a fedora in Bavarian green.  He creased it to his own specification with a karate chop.

Onto the food court, a veritable fast-food heaven:

The baron wanted something gentle on his stomach, so he opted for an open-face hot turkey sandwich.  Winston went for a burger.  I grabbed a dog and fries.

Our trio chomped on grub, five bucks a head among riff-raff, then sauntered back to our monster limo with ice cream bars in hand.

We did the Jefferson Memorial, then Lincoln.  Biggleswurm would not ascend the steps of the Lincoln Memorial because just looking up made him dizzy.

So we strolled the length of the Vietnam Memorial before returning to the limo.

Inside the strip club in Glover Park, north Georgetown, a big bare female butt looked straight at us from onstage.  The buxom redhead to whom it belonged turned around and blew the baron a kiss.

We found a high-top.

“I don’t think they serve champagne here, baron. Would you like a Bud?”

Three bottles of Bud, no glasses.

Biggleswurm stood mesmerized by the stripper, who now performed chin-ups with her legs spread-eagled.

“Go on, put a buck in her belt.”  I plucked a bill from my wallet and thrust it into Biggleswurm’s palm.  “Go to the bar and wave this.  She’ll come over—you slip it under her garter belt.”

“Yaa, yaa.”  The baron perspired heavily beneath his woolen plaids.

He took a couple steps, looked back at me apprehensively.

The redhead saw Bigglewswurm approach and decided that he, in his wacky togs, would be her foil.

She turned around and bent over, guiding her (not so) privates four inches from the baron’s nostrils.

I thought for a moment she was going to back into him and swallow his nose whole; granny glasses, too.

Meantime, Biggleswurm's eyes looked like a mouse mesmerized by a hungry snake.

The redhead shook her butt to stir him from his trance and get him to part with his money.

He raised the banknote to her belt and fumbled, causing the stripper to grab it from him and do it herself.

The baron then beelined back to us, a childish smirk on his face.


Next morning, the baron’s final day in town, time for business.

I tried to involve Clair George, but he bowed out, having had his fill of the wacky baron in Paris.

So we drove east to Wheaton, the offices of Enigma Books, on the fourth floor of a modern office building.

Ann, the marketing director, greeted us near the door.

“How nice to meet you—we’re all excited around here about your book!”  Clair’s daughter performed masterfully.

I sat Biggleswurm down and asked Ann, “Do you have the contract ready?”

She returned two minutes later with the boilerplate I’d given her the night before.  “Just finished typing it,” she said.

Then to nearby Barnaby’s for lunch, during which Biggleswurm studied the contract.

The baron's most immediate concern was that his photograph should appear on the back cover—the whole back cover.

No problem, I said, writing this in with a flourish.

Next, money:  the advance, which had been left blank.

I pointed out that independent publishers could not offer big advances; that the author should share the speculative investment in this enterprise and reap rewards after the book is published through a generous royalty plan.

“Look," I told him, “if you can get 35 grand from a German publisher, go for it, and I’ll work with them to license North American rights.  It would make everything a lot easier and take the pressure off.”

The baron immediately retreated.  “Well, I don’t know, we really haven’t shown it to anyone else yet, and it was you who sniffed me out.  Can you make me an offer?”

I told him I’d make some calculations and fax him when he got back to Germany.

On the drive back to Georgetown, Biggleswurm waxed lunatic on how his unusual appearance made it possible for him to assimilate himself into any social group and not be recognized as German, a people and culture he despised.

Then he ranted about the medical field.  “I’ve escaped twice from hospitals.”

“Mental wings?” I asked, unable to constrain myself.

The baron gasped, then laughed.

He thought I was joking.

Posted by Robert Eringer at 6:41 AM