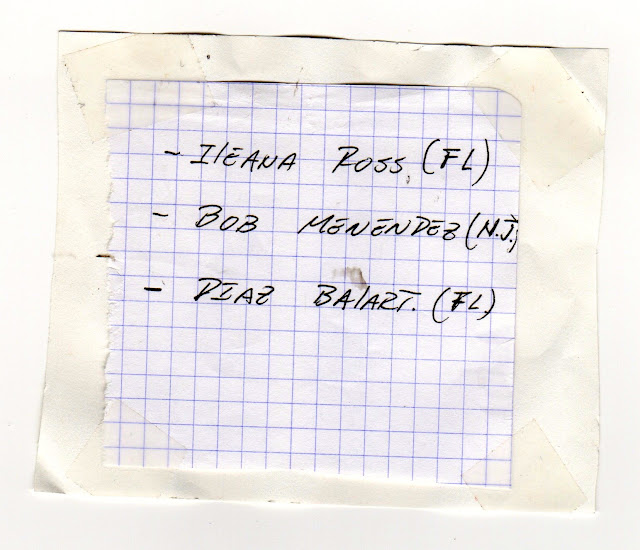 The Luis duo (Fernandez and Abierno) were sitting beneath an artificial palm tree in Saigon Gourmet when I arrived to curry them.

Abierno drilled his eyes into mine.  "So what have you been doing lately?"

"What were you doing there?" asked Abierno.

"What kind of books?"

"You have to be careful with current events," I said. "There's so much news these days, people overdose on what's going on from TV, newspapers, news magazines, who needs to read a book about it?  You've got to find offbeat subjects, the hidden truth, to make a book.  And it's all about forecasting.  You have to predict what will interest readers two or three years down the line, because that's how long it takes to write and publish a book.  Speaking of which," I added. "What happened to the spy ring book and the Castro biography your colleague Juan Hernandez in Havana promised me?"

Thus ensued a rehash of my book project meetings in Havana.

But just as my brief from FBI WFO had been diverted to focus on them, their brief from Havana was to focus on me, and how I might be of use to the Cuban DGI.

"But you can investigate the Cuban spy ring story in America, no?" said Abierno.  Implication:  I dig up information from the U.S. side, and give it to them.

"Sure, that part's easy," I said.  "But there's no point doing it until I'm assured access to the right material from Cuba."

A waiter took our order for three chicken curries.

Fernandez launched himself into a tedious spiel about how books like this might only serve to enflame tensions between our countries, and this contradicted Cuba's policy to promote normalization and not enflame tension.

"It doesn't matter," I said.  "There won't be normalization till after Castro's gone."

Fernandez gasped.  "But nothing will change after Castro," he said with a vehemence I did not know he possessed.  "Raul will take over.  Everything will be the same."
My misconception, he insisted, was a result of propaganda disseminated by Cuban émigrés in Miami.

"So what's the message you guys want to get out?" I posed.  "Write it down, maybe we can carve a book out of it."

"It's not so simple," said Fernandez.

"Then you're not doing your job right," I said.  "You’re in America.  You've got to simplify the issues to get your message understood.  Aren’t you familiar with sound-bytes?”

A waiter served three chicken curries.  Abierno attempted to follow my example and eat with chopsticks.  Big mistake.  He quickly tossed them aside.

"Tell me your objectives," I pressed.

The problem, said Fernandez, was three Congressmen who have put a lock on normalizing U.S.-Cuba relations.
Wouldn't it be grand, said Fernandez, if somebody investigated them and exposed their back-door financial contributions?

"Could you help us do this?" asked Abierno.

I plucked a notebook from my back pocket and tore out a blank page.  "Write down their names."

Unbelievable.
The Cuban DGI was asking me, an American, to investigate three U.S. Congressmen.
If this were a game of Cuban chess, these quacking Cubans would have just lost because asking me to this was incompatible with their diplomatic status and qualified for expulsion from the USA.

"I need starting points," I said.

"Presumably," I continued, "your country has already investigated these Congressmen," I said.  "Give me some leads."

"You can go to Cuba."  Fernandez nodded knowingly.  "They tell you few things."

"Okay," I said.  "But before I go running off anywhere, show me what you've got so I know it's worth doing."

The Luis duo shared another glance.

"We talk about this," said Abierno.  "We see what we can do.  And remember, you owe me a chapter."

"From the Ed Howard book."

"Luis, you have a good memory!"  I looked at Fernandez, my thumb pointed at Abierno.  "He's going to be famous one day."  I returned to Abierno.  "That chapter is a funny story."

"We hired a ghost writer to help Howard write his book," I said.  "After the CIA ordered the classified stuff cut out, our ghost was so spooked, he burned his copy."

"And your copy?" said Abierno.

"What's in the chapter?"

"And Howard did not care to lose this chapter?" asked Abierno.

"Ed was happy just to get his book published."

The check arrived.  I nailed it.  Both Luises objected, but I insisted, and they said next meal would be theirs.

Fernandez handed me a copy of something called Cuban Banking and Financial System.
"You will find this interesting," he said.  (Wrong, again.)  "You have friends in the media?"  Fernandez wanted to expand his contact list.

"You can introduce me?"

"Of course," I said.  "We'll have a dinner party at a restaurant, your treat."

My next meeting, two months later, was one-on-one with Luis Abierno at Biddy Mulligan's, a bar inside the Doyle Washington Hotel on Dupont Circle.
He'd had marching orders, he told me, and would depart Washington presently, return to Havana.

I told Abierno I wanted to know about Felipe Perez Roque, who had just become Cuba's foreign minister.
Roque was the flavor of the season to succeed Castro one day.

Abierno confided that he had attended technical college with Roque; that Roque had scored five, the highest rating, in every subject, every term; that they'd worked together in youth groups, knew each other socially as well as professionally.

Abierno questioned the notion of a Roque succession, not because the foreign minister lacked intelligence, but because he lacked charisma.

"Roque knows how to put all the right words together," said Abierno.  "But he cannot deliver them effectively."

Is there a book in Roque? I asked.

Abierno said it would be difficult to ask Roque to participate in anything that highlighted himself.

Self-promotion, he confided, was the kiss of death in Castro's Cuba.

Posted by Robert Eringer at 7:57 AM