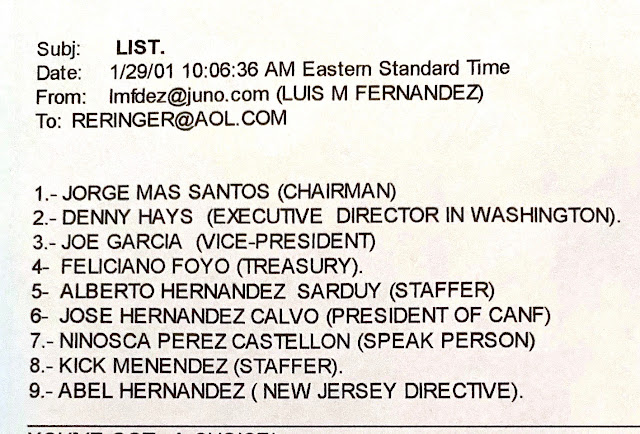 Despite Edward Lee Howard's best efforts with the Cuban DGI's Senor Deema in Havana and Edouard Prensa in Moscow, I never did hear from the mysterious Pedro; never received written material from Juan Hernandez in Havana.

And since I’d been operating in passive move, I wasn't pushing it.

In December, my Caller ID tagged an incoming call Cuban Interests.  I picked up.

"I'm in Washington," I said.  "The entertainment capital of the world."  (Bill Clinton was in the midst of his Monica Lewinsky debacle.)

Fernandez howled with laughter.  Then he got down to business.  "Can you meet me tomorrow?"

Flakester (my codename for Fernandez) looked heavier then when last I'd seen seen him, ages ago.  In his black blazer, white shirt and navy-blue slacks, he looked like a penguin as he waddled toward me in Starbucks, Westbard Center, near his home on River Road.

He did not immediately jump into a tirade about the United States, as with visits before. He'd had a communiqué from Luis Abierno in Havana.  They were ready for me.

"Ready for what?" I asked.  So much time had passed, I'd forgotten.

"To do your books," said Fernandez.  "Abierno asks you to Havana for few days."

I told Flakester that I'd gotten busy with other projects.

Pity, said Fernandez, because he wanted me to help him whip the U.S. media into a frenzy over an anti-Castro Cuban named Luis Posada Carriles.

"He's a terrorist!" Fernandez exploded. "We want him extradited to Cuba."  Flakester blathered himself into an apoplexy over Carriles's alleged connections to a) the anti-Castro Cuban conspirators in Miami, b) the CIA, and c) Iran-Contra, in that order.

He'd gained another ten pounds over Christmas and had morphed from a penguin into a walrus.  I bought him a fattening latte.

"Luis Abierno asks when you come to Havana."

I told Fernandez I was busy, maybe I'd send Rick K in my place.

That is what concerned me at this juncture.  Robert Hanssen, a senior FBI counterintelligence official, had just been arrested for espionage.  Nobody knew what or who he had compromised, and everyone at the Bureau was paranoid as hell.

The second-to-last place I wasn't going any time soon was Havana.  (Moscow was first).  Not least because, all of sudden, the Cubans were pushing it.

"Sure you know Rick," I said.  "You met him at that dinner party we had at Saigon Gourmet.  He's a good writer.  I'd assign him anyway, so it’s better he makes the trip and evaluates the material you have in Havana."

Next, the Flakester's own agenda, the reason he had phoned me three times to arrange this rendezvous:

Fernandez handed me a photocopy of an invitation to a reception inaugurating the new offices in Washington, D.C. of a brand new outfit calling itself The Free Cuba Embassy, to take place February 6th, seven p.m.

Flakester launched himself into a spluttering fit about the audacious absurdity of such a so-called embassy.

Then he made his pitch:  "We like you to attend this reception, meet some people."

"Jorge Garcia," said Fernandez.  "He is boss of this group."

Flakester requested that I ingratiate myself with Garcia for the purpose of infiltrating the Cuban American National Foundation.

"Identify the guys," he said.  "Know the environment."

Fernandez recounted to me that on a recent flight to Washington from Miami he had found himself seated near Jorge Garcia.

"I prepared myself psychologically," said Fernandez, a solemn expression on his droll face.  Garcia recognized Fernandez from Cuban Interests and struck up a conversation; they exchanged pleasantries while Flakester stained his shorts.

Once he had my tentative agreement to spy on the opposition for him, Flakester agreed to provide me with the names of others, beside Garcia, whom I should target.

That very afternoon, this e-mail from Imfdez@juno.com (Luis M. Fernandez):

Of course, the FBI went nuts.  This Cuban intelligence officer was asking me, a U.S. citizen, to help him spy on other U.S. citizens on U.S. soil, a request most incompatible with his status as a diplomat.

If the Bureau had not been so intent on assessing Flakester for possible recruitment, they would have PNG'd his butt back to Cuba, as in persona non grata.

On some Bureau-cratic level, someone decreed that I should attend the Free Cuba Embassy's reception.

I explained my reasons to Special Agent Mike Stuberg when he telephoned me late in the evening to see how I'd made out.

"I didn't," I told him.  "As far as I can tell, we have no plan, no objectives.  What you’ve got is just an approval for me to waltz in there and start spying on U.S. citizens, ostensibly for Cuban Intelligence.  Then I've got to figure out what to tell Fernandez about the people I met and what we talked about.  If I make it up, we run the risk of pissing him off if he catches me out.  If I tell him who I met and what they said, it ends up in a Havana newspaper to expose these Free Cuba folks, and we piss off the good guys.

My old friend, the late Walt Perry, had been an ace investigator for the Internal Revenue Service and chief architect of The Sting, or "illusions," as he liked to call his operations.

Walt always told me:  Define your mission, establish objectives, determine timescale, decide budget, do it, win.  And always have an exit strategy.

Somewhere along the line, the FBI had quagmired into a bureaucracy that stifled a balladromic approach toward operational planning.

The chicken curry had gotten so bad at Saigon Gourmet, we could have been chowing down in Havana.

The we, Luis Fernandez and me.

The chicken may have been rabbit.  Or cat.

Flakester was already seated, scribbling into a notebook, when I arrived.

I sat down, told him I’d been conceptualizing a TV situation comedy based around a spy bar called Spooky’s Safe House.

"Above the bar," I explained, "a sign says Fake ID Accepted.  The only public phone has a plaque that says Secure Line.  Of course, it's bugged by the management."

Fernandez's eyes bugged; talk of espionage made this dandiprat nervous.

"And Ed Howard says he's going to give me the raincoat he used when he escaped from the FBI in 1985," I added.

Flakester's round head bobbed around in all directions, eyeballs popping from their sockets.  Then he chuckled about Robert Hanssen.  "The Cold War never ended," said Flakester.  He lowered his voice.  Had I attended the Free Cuba Embassy reception?

I told him I had planned to attend but got called out of town at the last minute, missed it, sorry.  I added that receptions are terrible places for making meaningful contact with people.

"If you're really serious about this," I said, "I could phone one or more of the names on your list, go see these folks, really talk to them."

"You could do this?"  Flakester's eyes brightened.  He agreed that receptions are impersonal, and blamed that stupid idea on Luis Abierno.  "I would like you to meet Jorge Garcia."

"What is your objective for my making contact with Garcia?" I asked.

(I wanted to see if these buggers were any better with real goals.)

"We like to expose how they orchestrate terrorist operations against Cuba," said Fernandez.  "They plan assassinations of our leader.  And economic espionage.  They have paramilitary branch.  Follow the money," he added, as if this were an original phrase.

"Of course!"  Fernandez bubbled with joy.  "I get you cigars."

"When you come to Cuba?" asked Fernandez.  "Abierno is waiting for you."

"I don't know," I said.  "I'm busy with things.  Maybe Rick K will go instead of me.  He's coming into DC next week, would you like to see him again?"

Fernandez, fat bastard, cleaned his plate.  And this time (for once) picked up the check.

When I met Fernandez a week later with Rick K, I began by promising him a six-foot tall blonde beauty with blue eyes. But only if he participated in a weekend getaway to Reykjavik, where young Icelanders go berserk every weekend.

Yep.  But the hapless Fernandez lived in fear of his wife, who apparently kept him on a short leash.

Flakester should have been on a leash at The Daily Grill in Georgetown.

He slobbered and whined, dipping into a large chicken potpie between diatribes, ultimately gobbling everything in sight.

Again, he made a pitch for me to travel to Havana.  A bit strong, I thought.

I told him I'd already spent enough time and expense on Cuban project development; that Luis Abierno should get his butt to Washington with all the material they promised me long ago through Pedro.

Fernandez insisted they needed something more from me.

"Who?  I thought you wanted me to meet Jorge Garcia?"

No, the plan had changed.  "We like you to talk to Hays."

Denny Hays was executive-director of the Cuban-American National Foundation.

"What do you want me to talk to him about?" I asked.

"We want to know about his motivation and plans."

Most astonishing, Flakester said this in front of Rick K, whom he barely knew.

This was calculated on his part, the only sign of cleverness I ever discerned in Flakester.   A free ride back to his car.

I drove Fernandez to Sixteenth Street but declined his invitation to enter the building with him for my "payment" at this late hour.

Bottom line:  He thought he'd recruited a spy, but no cigars.

However, this perk:  The FBI provided me with tickets to see the Baltimore Orioles play an exhibition game with the Cuban National Team at Camden Yards, on defector watch.

I never did try to see Denny Hays.  And I never saw Luis Fernandez again.

This operation no longer had legs. Because of Hanssen, I would not visit Cuba again, nor would the FBI have sanctioned such a trip, for the same reason.

And without a well-conceived forward-thinking game-plan from the Bureau, I wasn’t about to place myself between Cuban Intelligence and the anti-Castro Cuban community.

The FBI discussed bouncing Flakester's butt back to Cuba but, ultimately, he was so ineffectual, it wasn’t worth the trouble.

Posted by Robert Eringer at 8:17 AM