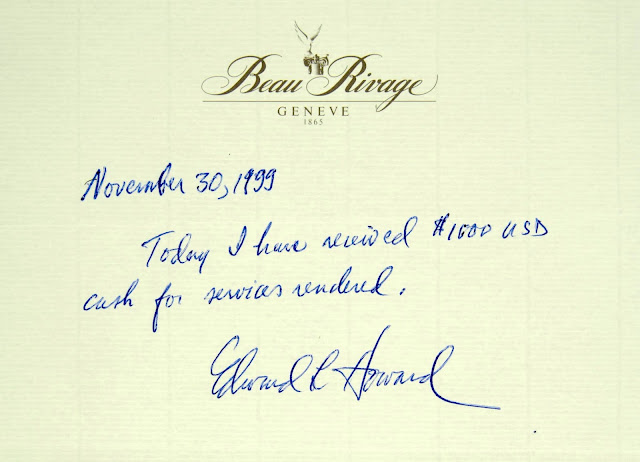 I set off yet again from DC to Europe  this time cloaked in a black raincoat and carrying a LaGuiole corkscrew in my pocket (as a weapon, more versatile than a dagger but, more important, it can uncork a bottle of Chateau Lafitte).

My driver slyly cut around Thanksgiving Sunday traffic at Dulles International Airport by detouring through their long-term car-park, dropping me at Arrivals, not Departures.

This had the added benefit of complicating any possible surveillance.

Not that I thought anyone would be watching this early.  But surveillance would likely kick in sooner or later, based on the scope of my missions, some of which are not revealed in this serial.

I found the Swissair desk and checked in for their nightly trans-Atlantic flight to Zurich.

If one needs to make a connection in Europe, there is no better hub than Zurich, where devoted Swiss timekeepers ensure strict adherence to schedules.  The airport is uncomplicated compared to, say, London Heathrow or Paris CDG, where one must jog three miles for a connection after landing 30 minutes late due to dense air traffic.

I settled into Swissair's club lounge.  True to national character, their Christmas tree was decked in gold, bulbs and garland.

Soon thereafter I boarded their Airbus 330 and I took my first-class sleeper-seat, replete with eiderdown quilt.

If you're going to spend just a few quality days in Europe, you need real REM, not a light snooze; otherwise, your psyche arrives as crumpled as your clothes.  And with fewer people around, you lessen the chance of catching cold or flu germs that recirculate through the cabin.

I hadn't planned to eat, just sleep, but the food and looked was so good, I tucked into caviar and smoked salmon and washed it down with Chateau Smith Haut-Lafitte, a full-bodied Bordeaux.

Muscles relaxed, brain tranquilized, I slid into a solid four-hour slumber before the jet glided into Zurich at 8:35 a.m.

Not 20 minutes later, I was belted into a second aircraft destined for Geneva, an earlier flight than posted on my ticket.  (It is always a pleasure to alter flight arrangements at the last minute whilst doing espionage.)

Thus, ahead of schedule, I hopped the Swiss Alps, listening to the High Llamas Cold and Bouncy, my personal rallying cry for sub rosa tasks.

Geneva was as gloomy and austere as its Calvinist founders; the kind of cold that seeps into your bone marrow and chills your soul from within.

In contrast, the elegant Hotel Beau Rivage welcomed me with warmth and a 50-foot Christmas tree decked in red and gold ornaments in its atrium lobby, offering gracious hospitality coupled with soft, comfortable furnishings.

This message awaited me at check-in:

I unpacked in room 223, showered, and ventured into Geneva's clammy shades of gray.

First, to Fina, a cigar shop, for a fistful of Cuban Monte Cristo No. 5s.  Then onto the Chocolaterie des Bergues for a mug of the world's creamiest hot cocoa.

This set me up for Edward Lee Howard who, as always, arrived on the minute, the one characteristic he shared with John H.

Howard had lost about 35 pounds.  He said he felt good, but I thought he looked like a corpse.  His face was gaunt and drawn, with a pasty complexion and dull eyes.

You needed bulk for a life in Russia; not just as insulation from the cold, but because you never knew where your next meal was coming from.

In Howard's case, this was a reality:  He'd lost most of his money in Russia’s stock market collapse, so his mood reflected his unhealthy appearance.

As a result of the weight loss (and no money to spare for a new wardrobe), Howard's clothes (blue jeans, brown sweater, trench coat) were two sizes too big on him.

Surveillance cut in (Swiss or Russian) as we set off along Quai du Mont-Blanc; a pair of young men of military disposition in plainclothes.  I made them; Howard was oblivious, or more likely, could care less.

"How is George Blake?" I asked.

I asked after Mila.  I’d learned from the Bureau (not Ed) that Howard had married her.

"We had a fight two weeks ago," said Howard.  "I have a calendar, and whenever we have an argument I write MF in the square.  Of course, a lot of squares are filled with MF.  Mila found the calendar one day, and she asked me, 'What does MF mean?' and I told her it stands for mindf---.  And, of course, that was grounds for a whole new argument."

Howard told me he preferred Lena Orlova for company, but continued to juggle both.

"Mila's father is retired KGB," said Howard.  "And her mother works for the FSB" (internal security).  “I once arrived home and found Mila on the phone with her father's SVR contact and I got annoyed.  I think she might be reporting on me."

Howard briefed me on the latest intelligence from his KGB friends on how a former KGB agent named Vladimir Putin had managed to succeed Boris Yeltsin as President of Russia:  Putin had escaped a scandal as top aide to the mayor of St. Petersburg, decamped to Moscow and cultivated a close relationship with Yeltsin through Anatoly Chubais, a financial whiz who bilked the World Bank out of a couple billion dollars.

Yeltsin's family grew to like and trust Putin; they promoted the notion of a Putin presidency as an insurance policy for the ailing Yeltsin.  Their primary concern was who would best protect their fortune and safety post-presidency.  Putin gave the right assurances and a deal was struck.

I asked Howard for news on Igor Batamirov, the former counterintelligence chief who had been so keen to write about the psychology of betrayal.

Howard told me Batamirov would not visit Washington "at this time" (on the heels of NATO's invasion of Serbia) because of how such a trip might be perceived by his former employer.

"I asked him before coming here," said Howard.  "He said, 'What about Kryuchkov's book?'"

Howard chuckled.  "The KGB is back with a vengeance under Putin.  Prelin's gotten busy, a job with the Duma."

We moved onto the Cubans.

Howard was surprised and disappointed that I had not received material from Juan Hernandez in Havana.  On a trip to Cuba two months earlier, Howard had connected with Senor Deema of the DGI about my project.

"Deema will be outraged to hear you're still waiting," said Howard.

Aside from a ten-day trip to Mexico City and Cancun in May, Howard said he wasn't traveling much.

More and more, he liked to spend time at his dacha; he had converted one room into a gym.

Plus Howard's ruined finances and declining business had turned him reclusive.

"I'm going to give it three months," he said.  "If I can't salvage my business, I'll dissolve it.  And I may take you up on your offer to do another book:  a grand tour of the United States."

"We'll meet at a pre-arranged hotel in Ciudad Juarez, Mexico," said Howard.  "About ten o'clock on a Saturday night we'll cross the border into El Paso, Texas.  That part's easy."

Once inside the United States, we'd take a cross-country jaunt, write it up as a humorous travel book:  Wanted Spy Fools FBI!

Howard said there was no other place in the world he'd like to visit but the USA, "for one final look at my old haunts, and to see the Grand Canyon."

Early evening, we met in the Atrium Bar of my hotel.

Sitting in an overstuffed armchair, sipping white burgundy, I glimpsed Howard through a window as he approached the hotel entrance.  Illuminated beneath a streetlamp, in his baggy clothes, Howard looked like an old man, a shadow of his former self.

He sauntered in, ordered a Coke.

Howard declined.  "I only drink on my birthday and New Year's."

Howard told me he'd heard that "the guy running my case, John H, has retired."

"What does that mean to you?" I asked.

Howard said he'd heard this from his KGB friends who had gotten it from American sources.

"But they're out there," Howard added. "Like that old movie Butch Cassidy and the Sundance Kid.  You ever see that?"

"There's a point in the movie," said Howard, "where Robert Redford looks back at the people tracking him and he says that classic line about those Pinkerton detectives.  'Who are those guys?'  That's me.  Who are those guys?" 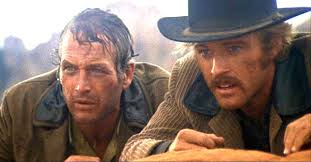 (The irony:  One of those guys was not out there, but in here, noting his every word.  It pleased me that an American traitor should feel that his trackers would never give up.  And more so that his trackers were running circles around him.)

"Who Are Those Guys?" - Butch Cassidy and the Sundance Kid - YouTube

We taxied to Geneva's old town, to a clubby eaterie called Les Amures, and ordered raclette.

As Howard dipped pieces of bread into molten cheese, he recounted an experience from his recent business trip to Rome.

"I took confession at the Vatican.  I told the priest I'd broken just about every rule.  The priest asked, 'You haven't killed anyone, have you?'  I said no."  Howard's voice quavered.  "The priest told me there's still hope."

(Howard was in denial over Adolph Tolkachev, whose execution was a direct consequence of Howard’s treachery, and probably why he sought absolution.)

This was the nearest Howard ever got, in my presence, to showing emotion.

We strolled down to the spy bar inside Hotel des Bergues.  I smoked a Cuban cigar, sipped armagnac (together, my favorite jet-lag remedy) while Howard finished his pack of Salems over hot chocolate.

Next day, Howard came by mid-morning for money.

He signed a receipt, as usual, for "services rendered."

At what point, I wondered, would the Russians suspect him of tripling?

Back at Movenpick for an early lunch, Howard confided a stock market scam in which he participated with some Australian friends.

It worked like this:  The Sydney-based broker chooses a penny stock, and puts the word out to Howard and other international friends that the stock is hot.  Suddenly, orders come streaming in from all over the world.  The Australian financial community takes note and they start investing themselves.

I plucked a Morgan silver dollar from my pocket and gave it to Howard.  "For good luck," I said.

We strolled across the lake, to a souvenir shop where Howard bought a CyberTool Swiss Army knife, a Christmas gift, he said, for a Russian friend.

That's where we parted, on Rue du Mont Blanc.

I did not know it then, but this was the last time I would see Edward Lee Howard.

Posted by Robert Eringer at 8:05 AM