On July 13th, I set out to Andorra—a road trip in a Volkswagen GTI I’d bought for M-Base three months earlier, and drove all day, 7.5 hours, reaching the Andorra Park Hotel by 3:30.

Andorra is an odd little place, more of a shopping center than a country—a tax-free consumer paradise staffed by dark, ugly, misshapen natives.

Even the hotel—said to be Andorra’s finest—was creepy and surreal, its service scarce and unfriendly.

But I needed to see these microstates up close and personal.

At ten o’clock the next morning, as appointed by Rene Brulhart of Liechtenstein, who opened this door to the Andorrans, I appeared at a small discreet office in Prat de la Creu, Unit # 402. 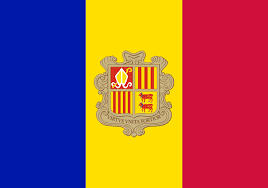 He spoke no English; his secretary, Ellie, translated.

I made my pitch.

Lluelles seemed to grasp my position—chief of the unofficial Monaco intelligence service, responsible directly to the Prince—and seemed to grasp the concept—Micro-European states band together to fight money laundering as a united association.

I used Andorra’s own motto—“Through unity comes strength”—to clarify and justify what we were attempting to achieve.

Russians, said Lluelles, had not yet discovered Andorra.

He smiled a lot and pronounced this a good idea, agreeing to attend our kick-off meeting in Luxembourg come October.

On the way out of Andorra, crossing into Spain, the fiercest Customs officers I’ve ever encountered rifled through the trunks of cars, including my own, on the lookout for persons exceeding the limit for booze and tobacco purchased tax-free in Andorra.

On July 17th, after a detour through seductive Girona and bouncy Figueras (Salvador Dali’s hometown)...

...I returned to Monaco for a meeting with interior minister Paul Masseron, who understood we should rendezvous in M-Base rather than have me noticed at his ministry.

“Many people know who you are by name, that you exist,” Masseron told me.  “But they don’t know a face or a body.”

Masseron was walking a tightrope between JLA and Proust, but had managed to find his balance.

He intended, he said, to declare Oleg Kim persona non grata in Monaco and to expel Kim's daughter Olga and her ex-husband from the principality.

I felt gratified:  Finally, some action.

I flew back to California, but my vacation was soon disrupted by Rene Brulhart of Liechtenstein to report a hiccup.

SICCFIN’s chief, unaware of my existence, told Lluelles it could not possibly be true, then phoned Rene in Liechtenstein to demand an explanation.

Rene assured her that nobody was stepping on her toes, that Prince Albert’s unofficial intelligence service desired to establish channels that had nothing to do with SICCFIN.

Picco-Margossian, a former prosecutor who suffered depression, went straight to her boss, the new finance minister, Gilles Tonelli (a poor choice as Tonelli was far out of his depth), who took it to the Minister of State Proust.

And Proust, aghast, brought it to the Prince, who told him:  “I know about this—he’s doing this for me.”

Caught off guard (and clearly hoping I’d misrepresented myself in Andorra), Proust bit his lip and retreated.

On July 26th, I received crucial intelligence from Slovenia’s Iztok P in our email data dump:  A confirmation/validation of the Bosna Bank money trail, identifying six wire transfers of thirty thousand euros each over the past six months.  These funds came into Sarajevo from the Middle East via Germany, went to Zagreb, back to Sarajevo, and onto San Marino.

Thirty thousand euros per month in a San Marino account appeared to be Philippe Narmino’s kickback.

On August 3rd, JLA called me from the Spanish island of Ibiza, on vacation with his family.

A new police chief had been decided upon:

Andre Muhlberger, from the Alsace region, with experience in Marseilles and Toulouse.

Muhlberger would commence his duties on September 1st, and, at my urging, JLA would introduce us during his first week and include him in our circle.

Stephane Valeri, JLA told me, was in “a bad mood” about the Palace’s restoration of its constitutional power, punctuated in a speech just delivered by the Prince to the Conseil Nationale.

Indeed, Valeri had expected to replace Biancheri as finance minister, as a stepping stone (in his mind) to eventually succeed Proust and become the first Monegasque minister of state. He had even prematurely announced to his staff he would soon leave the elected assembly to join the government.

But now, with no new job, Valeri believed JLA was to blame.

So Valeri had unsheathed his own knife and was known to be keeping company with those—including Thierry Lacoste—whose knives were already sharpened.

On July 9th, I already knew, Valeri and Lacoste had ambushed the Prince over dinner at Valeri’s weekend home in the mountains with accusations that JLA was supposedly undercutting the boss.

In fact, JLA had done nothing more than execute the Prince’s agenda, or decisions the Prince pretended to enjoin, hurriedly, in between frequent travels and amid multiple social distractions.

It was JLA’s role as gatekeeper—traditional for a chief of staff—that Lacoste found most objectionable because clients of his with frivolous projects did not meet JLA’s threshold for what was deserving of face time with the Prince.

Unfortunately for Lacoste, his legal career and livelihood was largely dependent upon his Palace connection.

Within days of dinner at Valeri’s home, the Prince appointed Lacoste to the board of SBM, a move badly received by Monegasques, who, suspecting cronyism, already perceived the Prince as being physically and psychologically absent from Monaco.

Posted by Robert Eringer at 7:57 AM