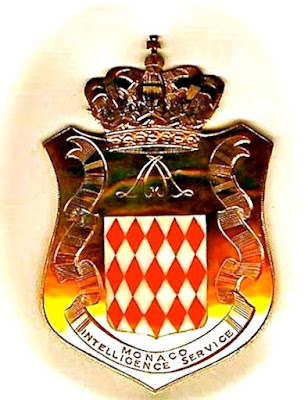 At Prince Albert's request, I dutifully manifested myself at the Palace’s private entrance and was escorted to the basement bar/nightclub.

It could have been bohemian Paris, circa 1950s, with its bistro tables and eclectic collection of unpretentious art and bric-a-brac.

In its center, a square bar separated two rooms. Off to one side was a fireplace adorned by four devils.

Perhaps this was Prince Rainier’s stab at decadence.

I could almost imagine Jean Paul Sartre in one corner, James Baldwin in another.  Salvador Dali could also have felt at home and probably once had.

Except that this bar had been bolted shut forever by Rainier soon after he designed and built it, supposedly due to an “incident” involving Princess Grace.

The Prince walked in at one o’clock.

“You’ve been holding out on me!” I said.  “This is where we should be entertaining foreign intelligence services, not M-Base.”

The Prince explained that until his father died he’d rarely ventured into this bar.

“My father wouldn’t let me play with his toys,” the Prince said quietly.  “Sometimes I snuck girls in when he was away.”

“I have a sense that JLA’s days are numbered,” I said.  “Who will replace him?”

The Prince sheepishly told me JLA would depart in May or June, at least seven months away.

We began to discuss Narmino, but JL arrived to join us (he was expected), so instead we addressed his status within our service.

I suggested that JL become my deputy.  (My original deputy, Piers, had stepped away from this job three months earlier, due to his disillusionment of the Prince's inability to lead.)

JL was Monegasque and a blood member of the royal family.  However, he was not a man of independent means and would need a salary to support this position—not anything I could afford even with our increased budget.

Ideally, we’d need a cover job for JL, both to pay his salary and to conceal his true work as my deputy.

That led us into the second item on my agenda:

The Monaco Institute for Peace and Reconciliation (MIPR).

If we could get this launched through seed money from donors, JL, as a Monegasque and member of the Royal Family, would be the ideal figurehead to draw a salary from MIPR and truly get it going as executive director.

The Prince thought this a superb idea.

I showed him the letter I had drafted for him to sign, to begin the fundraising process.

He read it, pronounced it “excellent,” and said that he would transfer it onto crested stationery for his signature; that it would be ready for me three days hence, just before my trip to Luxembourg.

He asked that I phone Madame Viale at nine o’clock on morning of my departure to arrange its collection.

We helped ourselves to sandwiches from a table set for a buffet deli lunch and sat down to eat without staff hovering around us.  A bottle of good Bordeaux had been opened for us to pour.

I reminded the Prince that Luxembourg, in one week, would host the first Micro-Europe intelligence association meeting.

Also, I’d had requests from both CIA and SIS to meet him.

The Prince grabbed his diary and confirmed both meetings for December 14th.

JL was dismissed; the Prince and I repaired to the parlor upstairs for further discussion.

He had, the Prince told me, recently granted an audience to Franck Nicholas, his former bobsledding teammate.

A Freemason, Nicholas asked if he could bring two other Freemasons, including Conseil Nationale Vice President Claude de Boisson, for a second audience to pitch him on creating a Masonic lodge in Monaco. 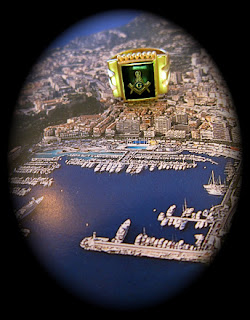 The Prince added that he had agreed to see them.

I’ll pause here a moment to collect my thoughts.

Had the Prince lost his proverbial marbles?

A few years earlier he had instructed me to investigate French Freemasons due to his grave concern about their influence in Monaco.

We discovered French Freemasonry was corrupted by organized crime.

So why on earth would the Prince entertain allowing a Masonic lodge within the principality?

Resisting an urge to argue the point, I countered that if the Prince indeed allowed Freemasons to establish a lodge in Monaco, it should be on condition that, in the interest of transparency, all members publicly declare their affiliation.

The flip-flopping Prince ventured his opinion that establishing a lodge in Monaco would keep out influence from Masonic lodges in France.

I begged to differ, pointing out that French persons holding police or government positions in Monaco would continue to be influenced by their own lodges and use a new Monaco-based lodge to strengthen their power.

Then the Prince asked:  “Do you have Thierry Lacoste under investigation?”

So the answer is no.

However, you may recall that FLOATER inadvertently met Lacoste through Steven Saltzman, and we reported that encounter to you.

Additionally, our agent LIDDY provided Lacoste’s name incident to whomever was investigating JLA.

Finally, we discussed the future of M-Base.  Our lease would end in November but we had been offered the opportunity to rent it for an additional six months while we hunted for a new operational office, as M-Base had become too visible.

The Prince authorized a six-month extension. 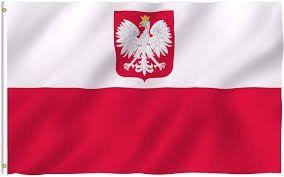 One of the two had spent five years in Brussels as liaison chief to NATO, which, he said,  “stands for No Action, Talk Only.”

We described our service and they described theirs.  The Poles were surprised by how advanced we were.

And it was true:  we had one heck of an intelligence service operating in the Prince’s name, which we—and our partners—now outright referred to as the Monaco Intelligence Service or by its acronym M.I.S.

We‘d even struck gold badges and created identification cards for the principals, which the Prince signed.

People who understood the intelligence business were awed by what we had accomplished beneath the radar screen.

The Poles told me that at a recent Club of Berne meeting, its new chairman, an intelligence chief I knew, predicted to those assembled that intelligence services would eventually cease to exist due to 1) the Internet age of information access 2) media attention and 3) lawyers putting restraint on operations.

I differ with that analysis.

Intelligence is one of the world’s oldest professions—number two behind prostitution—existing long before formalization by the likes of Sir Francis Walsingham and George Washington’s spymaster, Benjamin Tallmadge.

The Internet is about quantity not quality, an overabundance of unproven data that begs this question, originally put into my head by Miles Copeland:

Does one want to be the most informed or the best informed?

As an “insider,” using Monaco as the example, I knew that the media knew precious little of what was really going on—my own work as an example.

But with regard to lawyers, the chairman had nailed it.

Espionage by its very definition breaks the laws of any country it is used against.

For lawyers, who have become ever present in recent years at the elbow of spymasters, to prevent their service from breaking laws is effectively to neuter their ability to operate.

My prediction is that future leaders will ignore established services and create new “unofficial” secret units that collect and analyze the intelligence needed for prudent decision-making.

One of the two Polish representatives was its service’s legal counsel.

Thus, this was the first and only service, in any of our liaison partnerships, that demanded as a condition, we route communication through SIGER, which existed officially.

As the Prince instructed, at nine in the morning on October 24th, I telephoned Madame Viale to arrange collection of the peace institute letter.

She did not know what I was talking about.  She patched me through to the Prince at Roc Agel.  He promised a signed letter at one o’clock.  His new instruction:  phone Madame Viale at noon.

When the clock struck twelve, I phoned Madame Viale.  She had no letter and still did not know what I was talking about.

Suffice to say, I left Monaco without a letter.

A few weeks later, when JL tried to chase it up, the Prince apparently turned on him and snapped, “There won’t be a letter.”

We speculated that Paris Clique clown Thierry Lacoste had poisoned the Prince of Flip Flop's thinking on this issue.

Posted by Robert Eringer at 8:10 AM