On June 13th, 1997, armed French police burst into an old mill house in Champagne-Mouton, a village in the cognac-producing region of southwestern France known as the Charente.

There, acting on a tip, they found Ira Einhorn, an American hippie guru wanted for murder.

Einhorn had bludgeoned to death his 30 year-old girlfriend, Holly Maddux, when she dared call their relationship quits.

He stowed her body in a trunk inside the closet of his Philadelphia apartment.

That's where her mummified corpse remained, until discovered by homicide detectives 18 months later, on March 29th, 1978.

When detectives turned around and told the naked Einhorn what they had just found in his closet, he replied, "You found what you found." 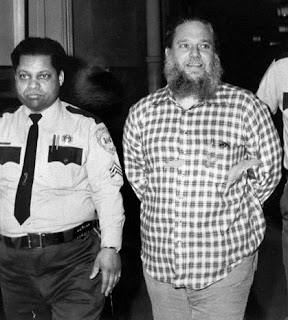 Out on bail, Einhorn bolted a few weeks before his trial was due to begin in spring 1981, moving from Ireland to England to Sweden to France, living under assumed names, a fugitive from justice.

Based upon forensic evidence, the jury took only two hours to convict Einhorn of first-degree murder and he was sentenced to life imprisonment (if ever found). 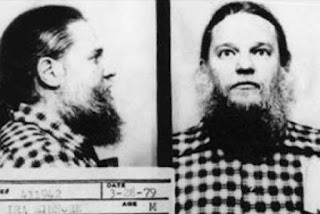 The French took Einhorn into custody, put him in prison, and thus began a fight by the U.S. Justice Department to extradite the so-called Unicorn Killer back to the United States.

The French balked, an objection based upon their opposition to the U.S. death penalty.
When the U.S. attorneys pointed out that the death penalty was not an issue in Einhorn's case, because his sentence was life imprisonment, the French objected to the concept of trials in absentia.

To mollify French sensitivities, Pennsylvania's state assembly actually passed a special law that would allow for Einhorn to be tried again.

Yet the French continued to waffle and, after six months, they released Einhorn from prison and set him free, pending extradition hearings, a long, drawn-out process with many levels of appeal.

In early 1998, when John H was still on the job, I told him this:
I know the French; they're not going to give Einhorn to the U.S. any time soon, maybe never; and when it looks to Einhorn that they might relent, he'll flee again.
"Let me take a stab at him," I said.
I would insert myself into Einhorn's existence, I said, maybe hasten his extradition through stealth.

Ever the good soldier, John H phoned his colleagues in Philadelphia to say he might be able to help with their Einhorn problem.

Their response:  Thanks but no thanks, we’ve got it under control.

They don't like being told what to do by Headquarters.

And they especially don't like other field offices meddling in their affairs.

Plus a crossover from Division Five (foreign counterintelligence) to Division Six (criminal investigations) would lead to a whole new set of administrative hassles.

Finally, the folks in Philadelphia became so exasperated by the French, they offered John H and me a hearing.

Mike and Ed, two tough special agents from the Bureau's Fugitive Squad in Philadelphia, drove three hours to Washington for a pow-wow in John H’s room at the Sheraton Wardman Tower.

Ed stood over six-foot-six and with a solid build.  Though soft-spoken with gentle eyes, this was not a guy you'd want chasing you down.

Mike, of shaven head, was smaller, but sinewy and no slouch himself.  He wisecracked his way through the scummier parts of Philly.

They heard me out:  I'd insert myself into Einhorn's existence.

Without going into details, John H confirmed that I could do this.

I would strive to become Einhorn's confidant and friend.  If Einhorn fled France, as we all expected of him at the penultimate juncture, I'd be one of the few persons he'd tell, and we'd know where to find him.

Mike wanted to know, how would I pull this off?

"Einhorn is clever," said Mike.  "People he meets get taken in by him, like he's hypnotized them to believe his story.  And he'll probably see through this."

Mike and Ed exchanged glances.  What did they have to lose? one said.  Nothing, because Albuquerque would pay the tab (to start with, anyway).

"What do you need?" asked Mike.

I had read that Einhorn's favorite pastime was surfing the Internet.

"That's it?" This astonished Mike.

I am interested in your novel, have you found a publisher yet?

"I also have a few book ideas that might appeal to your sense of the cosmos (if not your sense of humor).  I'd be happy to meet... chat about book publishing, writing, etc."

Because Einhorn was on AOL, same as me, I detected that he accessed my message just five minutes after I’d sent it.

His curiosity obviously piqued, Einhorn, in a return e-mail, invited me to phone him.

At ten the next morning (mid-afternoon in France) I telephoned the number he gave me.

Einhorn answered himself.  He spoke in an easy-going, enthusiastic manner, punctuated with chuckles.

I found him full of himself (as expected) and excited by the attention his case had aroused; an interview he did with ABC News reporter Connie Chung was scheduled for imminent broadcast.

Einhorn told me he had written four novels.

Publishers, he said, were only interested in his memoirs, which he wanted to hold back.

Reason:  A novel would be a litmus test to see if the Maddux family tried to freeze his earnings through their pending wrongful death civil litigation.

(Einhorn's reasoning was sound:  Holly's siblings soon won a judgment against him for $907 million.)

I said, Fine, we'll talk novels.
"The key to shielding your earnings," I added, "is to be creative."
"Now you're talking!" replied Einhorn.  "You've said the right word, creative.  I only like to work with people who think creatively."

I'd said the password.  Einhorn invited me into his thoughts, welcomed me into his life.
The only other question he had:  How soon could I get there?
Einhorn told me he'd never planned to live in France, "but just dropped in like a Martian.  I'm so happy here," he added, "I couldn't imagine living anywhere else."

How about prison, buster?

Thus, I reported to John H, and to Mike and Ed:

I have established an excellent rapport with our target.  The next step, aside from communicating with him by e-mail, should be for me to travel to Champagne-Mouton to further earn his trust.

Einhorn and I zapped each other with e-mails while Mike and Ed fought bureaucratic battles for a green light and funding (my time was on Albuquerque, but Philly would have to pay travel expenses).

I recorded Einhorn's interview with Connie Chung at his request and sent him the videotape.

And in early December I congratulated Einhorn for making the cover of a magazine published by the Fox TV program America’s Most Wanted.

"And happy New Year to you," he zapped back five hours later.

We were practically old friends.