We (the FBI and me) were content in our belief that if Ira Einhorn chose to flee, he would do it my way, to Poland.

I would be along for the ride.

And the Philly Fugitive Squad (Mike and Ed) would be just inside the Polish border to greet Einhorn with steel cuffs and take him home, face the music after over 20 years on the lam.

Now we needed to wait and watch; monitor Einhorn's appeal process and his state of mind.

A stall for time, giving him as little progress as possible on the publication of his novel.

We knew he was desperate for money and that, in his mind, I was his only hope for making any.  We would play this to our advantage.

To commence the stall, I sent Einhorn an e-mail saying I had consulted a lawyer (his own suggestion) regarding the structure of a foreign entity that could pay Einhorn an advance that would escape scrutiny of those enforcing the civil judgment against him.

The imaginary lawyer, I wrote, had been negative on the whole project.

"On what basis?" Einhorn shot back by e-mail.  "Has the first amendment disappeared?"

I pretended to seek a second opinion, then "decided" to use a British lawyer, which would have to wait until I next visited London "in the very near future."

Einhorn's anxious e-mails to me soon became caustic and frustrated.

I was winding him up.

And enjoying the process.

In mid-February Einhorn outright demanded that I produce bound galleys for him, and on the 20th of that month he snapped – and zapped me a menacing e-mail:

Fat Ass was trying to blackmail me into publishing his wretched novel!

I listened a full five minutes while Einhorn vented his spleen, acid reflux rising to a gorge.

"The galleys are almost ready," I said.  "Do you want them or not?"

"Would it be okay," he asked, "if I provide my own colophon?"

"A calligrapher friend of mine in Philadelphia has drawn a unicorn."

Then I wrote this memo for Mike and Ed in Philly:

Short of new pressure from France, EINHORN remains content to sit where he is and wait out the next round of his appeal.  It could be a year or longer before he decides his liberty is in danger.  Only then will he consider my Poland option--or implement his lawyer's advice to seek refuge in Cuba.

The only way for me to remain on good terms with EINHORN would be for me to provide him with bound galleys of his novel.  I am loath to do this as EINHORN will use these galleys to attempt to improve his standing in the French media by depicting himself as a man of letters.

Perhaps we should inform the French police of the contempt EINHORN has shown for them in his private conversations with me, and of EINHORN's scheme to flee France for Cuba.  The French would be greatly embarrassed if EINHORN was able to escape.

But in the interest of buying more time and remaining in sync with Einhorn, they requested that I bind some galleys and keep him moderately happy.

Thus, in mid-March, I sent Einhorn a small batch of bound galleys.

I told him I sent a box of ten, but did not.  Then I expressed surprise that the box had not arrived.

"What copies?" Einhorn e-mailed back, his blood pressure obviously arise.  "Our mail is very well handled here, so that can't be a problem.  If it would get to here, WE WOULD GET IT.  All packages should be marked gift and listed as being of no value" (he got that right) "AND WELL WRAPPED.  This could be the only answer IF you sent a package.  THE POST IS NOT GENTEEL!!  I have been buying books from the USA for over three years, about 100 individual packages--NOTHING HAS FAILED TO ARRIVE.  Please confirm, as I don't want to turn this into S.J. Perleman (sic) writing to his Chinese laundry man."

In keeping with his wishes, I replied with one word:

Einhorn:  Nothing we can do about that--please send me 10 copies and confirm that you have done so.

When I dragged my feet about sending galleys to a number of addresses supplied by Einhorn, he turned to menace again.

"Call me today," he e-mailed (June 3rd, 2001), "or deal with the press and the police as I have consulted a number of people about what you have done and none of them is against my doing what I am about to do.  You agreed to do something which you have miserably failed to do."

I telephoned Einhorn and attempted humor.

This niddering buffoon launched into me (as I gather he once launched into Holly Maddux, though she had the misfortune of standing with her back to him at the time).

The only weapon at Einhorn's disposal was words and these he lashed with risible venom.

"You have to get over here within a week and talk to me or I'm exposing you!"

"Then it's all over," Einhorn spewed in a murderous high-pitched voice, reminiscent of Hitchcock’s classic Psycho.  "I'm going to ruin your life!"

"But you seem bent on this path whatever happens," I said calmly.

"Don't you understand what you've done to me?" hollered Einhorn.

(Not only did I understand, I hadn't finished.)

"Done to you?" I said.  "I've paid money to print and bind galleys and mail them to you.  Instead of gratitude, all I get are threats."

"You don't grasp what I'm saying!" yelped Einhorn.  "You have held me up two-and-a-half years!"  Blah, blah, blah.  The onslaught continued another ten minutes.  "I don't know what's going on in your mind!" he concluded with a guttural rasp.

If he only knew.

Once Einhorn had spent his rage, we carried on as before.  I told him that I would dispatch galleys to the persons on his list.

Einhorn changed the subject to insects; rather, the absence of insects from the Charente this season due to spraying.

Holly Maddux's siblings (two sisters and a brother) no doubt had similar feelings about the orthopterous Ira Einhorn.

And they allowed their feelings to be known when they met in early June with U.S. Attorney General John Ashcroft.

In advance of their scheduled appointment, Ashcroft naturally asked his minions for a briefing on the Einhorn case.

When Attorney General Ashcroft learned Einhorn was plotting an escape to Cuba, he presumably telephoned his French counterpart and demanded action.

Because all of a sudden, on July 10th, months ahead of schedule, a French judge announced that Einhorn's appeal would commence the following day, with a decision expected the day after.

Not only that, Einhorn's house was then surrounded by about 40 police officers.

Einhorn scribed me this e-mail:

"Some judge freaked.  No one knows why.  It should have been September or October or later.  The (French) government is pushing.  There are now 8 cars parked outside and they have set up a customs post outside our house so that when Annika leaves without me, the car is searched for alcohol and tobacco, as I might be hiding in the 18" by 18" box in the back of our very small car.  They also have posted men in the field around my house."

That would be the backyard Einhorn intended to walk across when it came time to boogie.

I e-mailed back:  "This sounds serious--what the hell is going on?"

Einhorn:  House now surrounded by a small army.  The entire area is blockaded and no one is allowed in without questioning.

The court decision went against Einhorn. 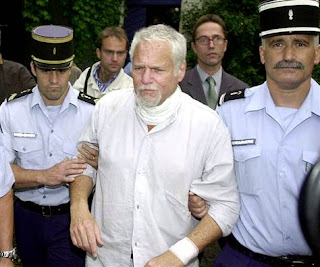 To protest his imminent extradition, Einhorn invited a French TV crew into his house and, while they filmed, lamely pierced his throat with a kitchen knife.

If Einhorn truly meant to kill himself (I am certain he did not, the coward that he was), he failed miserably.

All Einhorn bought himself was one week before the French authorities declared him fit to travel.

Tension reigned supreme on the Fugitive Squad in Philadelphia.  They still worried Einhorn would make a run for it.
On July 18th, Einhorn planned a party at his home, part celebration of Annika's 50th birthday, part bon voyage bash for himself.

Philly had a concern that Einhorn would use the party to mask an escape.

But at eight o'clock next morning, Einhorn confirmed his presence at Moulin de Guitry in an e-mail to me:

"The media are gathering outside... a swat squad has joined the 7 other police services in town. C’est fou” [it is mad].

I phoned, spoke with Annika, heard Einhorn yakking in the background.

At two p.m. French police officers took Einhorn into custody and drove him to Charles de Gaulle Airport in Paris, where a U.S. government chartered plane awaited his arrival. 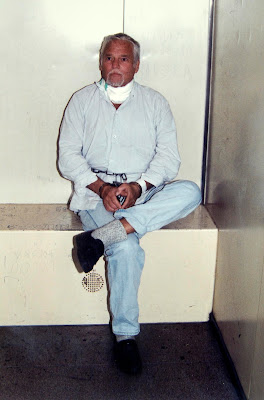 At about 1:10 a.m. Paris time, I received a call from Ed, who'd just cuffed Einhorn and buckled him into a seat.

Ed and Mike phoned me the following day from Philadelphia.

"Sorry we didn't do it in Poland," said Mike.

"You kidding?" I said.  "The evil scumbag is behind bars.  Mission accomplished."

"Get this," said Ed.  "On the plane back, Fat Ass told me he had a publisher for his novel. I asked him, 'Who's publishing your book?'  He wouldn't give you up.  He thinks his future as a famous author depends on it."

The guy who considered himself the smartest man in the world had just been out-smarted. 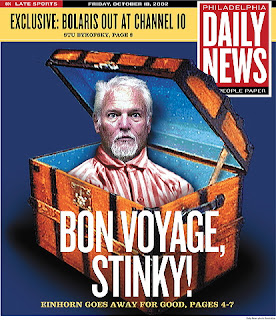 On October 24th, Einhorn wrote me from state prison in Houtzdale, Pennsylvania:
“According to Annika, you have just disappeared.  When we last talked you said you would work to get Cantor Dust published..." blah, blah, blah.

Fat Ass did not even realize he’d been stung! 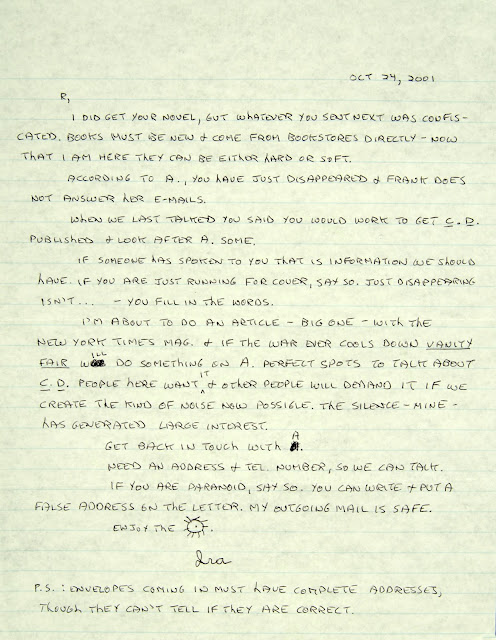 Posted by Robert Eringer at 5:32 AM