Clair phoned me after a severe tongue-lashing from the countess.

"I haven't been chewed out like that since Yurchenko re-defected to Russia," he told me afterward.

"Okay," I said.  "I'll have everything we need by tomorrow."

Next morning, I connected to the Swiss Banker's cell phone and found him in Liechtenstein.  "

"We're ready to proceed with Number Two,” I said.  “Your banker must approve the cost.  We can meet," I offered.  "Or I can fax him the information at much less cost."

We must meet in one week, the countess insisted.

Then I phoned Clair.  "I just saved your sorry ass."

On the day of Monaco's Grand Prix, Clair and I rolled into the French Riviera and checked into Le Meridien in Nice.

It gave us the best part of a day and night to stave off jet lag with wine, Armagnac and Cuban cigars.

Most of this medication was taken under one roof, the famed Hotel Negresco on the Promenade des Anglais. 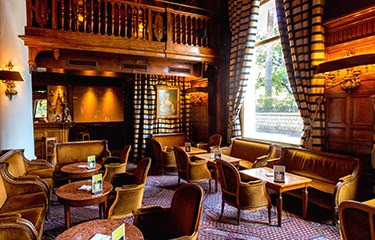 Bar le Relais, a large, galleried room provided the proper British setting for aperitifs (the Brits once owned the Riviera).

A jet-black prostitute in purple chiffon sat along one side.  She welcomed us with a mischievous look before answering her cell phone.

We were expecting a pianist.  What we got was a Bill Gates lookalike who produced irritating techno-muzak with a synthesized drumbeat and other canned noise.

At some point, into his second scotch and soda, Clair gazed across the room, leaned toward me and asked, "What instrument is that lady playing?"

I looked where he pointed, then back at him.

"What the hell are you talking about?"

Clair, who had recently been diagnosed with macular degeneration, got up, sauntered toward whatever he thought he was seeing, then moseyed around the room, finally returning to our table.

He reseated himself.  "Maybe I need another scotch," he said.

"Maybe you need more serious medication," I said.  "It sounds like CBS to me." 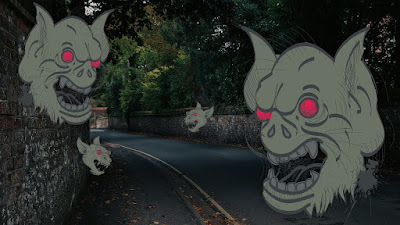 "I can hardly wait."

Next day we moved our feast from Nice to Monaco, a principality shattered from 200,000 visitors the day before.

This trip we opted for the modest Hotel Abela, in Monaco's quiet Fontvieille quarter.

The Swiss Banker drove us to our client’s estate where hundreds of pink flowers—planted to look wild, growing out of rock crevices—lined the serpentine road.

The countess greeted us with warmth, sat us for lunch on her patio.

"Tell me," said the countess.

We would not report the contessa's daughter to the IRS.

Instead, we would create the illusion that she might be under investigation by the IRS.

"I met with my friend Moono.  He spent 25 years in the IRS.  Moono told me the best place to make his calls would be from a public phone booth in a large city—maybe Los Angeles or Chicago or Washington.  It is not unusual for an IRS special agent to initiate an investigation from a regional hub—or from headquarters.

"Next, Moono and I crafted the best way for him to word his pitch.  This was the hardest part.  We want him to seem like he's working for the IRS without actually saying that he is, because posing as a federal officer is against the law.  Here's what we came up with:

"I worked for the IRS.  I'm developing a file for likely submission to the IRS's criminal investigation division and I have a question for you:  Does Lara have an account with your bank?

"He would use this line on Lara’s two New Mexico banks, then move onto Cayman National Bank and finally UBS in Geneva."

The countess and her banker exchanged glances.  She smiled.  He whistled.  Both seemed to understand the waves this would create among Lara’s financial advisers, led by the Gray Fiduciary.

To my mind, this was far better than actually reporting Lara to the IRS, which we would never do though I believe the countess would have done had she dismissed us and hired others.

In this way, we were protecting Lara from her own mother and a genuine IRS investigation.

The banker broached his concern.  “Is it natural?"

Meaning:  The Gray Fiduciary and his attorneys will study what they've heard about Moono's phone calls.

Will it make sense to them?

"Moono assured me this is how the IRS would handle a preliminary investigation based on data received from an informant."

We agreed to sleep on this and regroup the following morning, when we thrashed it around one more time.

The countess feigned new doubts (a dramatic touch), which were immediately dispelled by the banker (himself, very gung-ho—probably because our IRS scare would embarrass his competitor, the Gray Fiduciary).

Three weeks later I returned to the French Riviera with results from the IRS scare.

"My operative traveled to Washington," I explained to the countess and her banker.  "He chose a suitable public phone in the quiet area of a mall and I bought him a telephone card so he wouldn't have to pump the thing full of quarters."

She appreciated attention to detail.

"The first call he made was to UBS in Geneva."

I produced a sheaf of hotel stationery inked with old-fashioned scribbling.

"A female answered.  My operative said, ‘I'm trying to locate Lara [last name], who may have an account with your bank—can you help me?’  The female connected him to a male bank officer, to whom he gave the same opening.  The official asked why he was interested.  My operative said, ‘I'm looking into real estate transactions where there is no mortgage and where payments were made with funds from foreign banks.’

The countess squealed with delight.

I recounted similar telephone calls, made over two days, to the Cayman National Bank (they hung up), Butterfield Bank of Bermuda, Grand Cayman and a bank in Santa Fe, New Mexico.

"When exactly did you make these calls?" asked the banker.

The banker nodded and looked at the countess. "It explains what happens."

"What happened?" I asked.

One week earlier, the Gray Fiduciary had called the banker for an appointment.

"We know each other 30 years and this is first time he comes to my office," said the banker.  "He is pale and nervous.  He asks for my advice on how to deal with IRS."

Soon after, the countess received a big bouquet of flowers from Lara, who then arrived for lunch at Hotel des Bergues in Geneva.

Mother and daughter whooped it up like there'd never been a bad word between them, let alone a multi-year estrangement.

"Our countess says her prayers have been answered and the problem's solved," said Clair, who had spoken with her by phone.

"Fine by me,” I said.  "Sounds like a happy ending.   Shall I invoice the countess for that million dollars she promised us for traveling the world to think of her?"

The countess had not called.

Nor had we solicited any further assignment.

Our long-running soap opera, it seemed, had finally been cancelled, mid-season, leaving assorted subplots dangling in the wind.

On a trip through London, I phoned Baron von Biggleswurm and explained that I'd been looking for the devil in Iceland, part of a new odyssey in search of  creativity and madness.

"You're a strange person," he replied.

Three months later, I had a reason to visit the French Riviera for the first time in ages.

I phoned the countess and she invited me to lunch.

Although a mistral had blown through and uprooted several tall trees, her grounds looked lovelier than ever.

The old manservant stood near the front door in full livery and a beaming smile as my taxi wound into the piazza.

My countess was just inside.  She was older and frail.  Her eyes had dulled, the old feistiness gone.

"How is your grandson?" I asked.

The boy everybody had worried about and fought over for a decade had just turned 19.  He was enrolled at London University, just returned from spring break in Spain.

The countess shook her head.  "His health is not well.  He has an enflamed digestive tract."

The countess shrugged, a wan smile.

"One day she calls and tells me she will never forgive me.  A week later she sends me flowers, calls me and says she'd like to give me a big kiss. She put the house in Santa Fe up for sale and moved all her furniture back to Europe.  Now she's very down on the USA."

This was the precise moment I might have reminded the countess to reward the spymaster and me with the the million-dollar bonus she had promised.

"Take a world cruise and think of me," she had said.

I could not do this.

The manservant called lunch and we took our places:

Linguine with tomato sauce and mozzarella, veal cutlets, small potatoes—and a salad of greens and avocado.