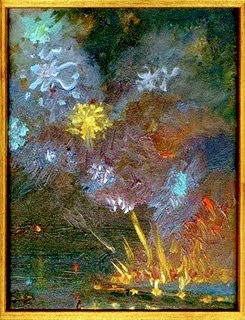 For our M-Base party, which started at six o’clock, we hired a harpist.  It set the right tone for we angels battling devils, against all odds.

I daresay:  if the Prince had me on one shoulder, representing JLA and members of our service, on the other he had a dozen Beelzebubs slinging poison darts at in our direction.

The Bulgarians arrived early, followed by Marco Mille and Frank Schneider from Luxembourg, who, at my request, brought Iztok P, chief of Slovenia’s intelligence service.

Soon after, Rene Brulhart arrived, he, the chief of Liechtenstein’s Financial Intelligence Unit.

(The Bulgarians were particularly interested in the recent suicide of John Mills, staff director of the House Permanent Select Committee on Intelligence staff, and tested the reactions of other party guests, believing this topic worthy of a fishing expedition.  Former CIA Director John Deutch had been caught misusing classified information on his laptop computers at home and apparently it was Mills who had brought this to the attention of George Tenet, his successor as DCI.)

It was not Halloween, but by the time the Prince arrived at 7:20 M-Base was a party of spooks.

One by one, I eased them over so they could shake the Prince’s hand and look him in the eye while he acknowledged that I operated in his service.

(As Marco Mille later told me:  “It was very important—and necessary to proceed.”)

I then introduced two men who were engaged in our peace institute effort; the Prince reaffirmed his commitment.

At ten o’clock our guests were graced with a magnificent fireworks display over the harbor.

Despite a late night, next morning started early for me—a private meeting with Iztok P, whom Marco Mille called “the key to the Balkans.”

That was the key I needed to turn.

We created an email data dump and I provided Iztok with the information I hoped he would verify and validate.

He was game; another liaison partnership established.

I hurried back to M-Base for a ten o’clock meeting with our peace institute committee; we refined Ian M’s mission statement.

(The cynic in me is convinced the only way to achieve world peace is to Prozactivate the globe i.e. lace the world’s drinking water with Prozac.  But since that is unlikely to happen, our institute would be the next best thing—a worthwhile endeavor for the Prince.)

Over a bottle of cold Pouilly Fume this fine afternoon, we agreed some basic club rules:

·      At earliest opportunity, purchase a yacht as association headquarters, preferably with funds confiscated from arms-dealing money launderers.  (If/when threatened by fire bombers, we simply pull anchor and cruise away.)

Jocularity aside, we had good reason to band together.

First, mutual cooperation and a united shield against shady characters wanting to park dirty money in our neighborhoods.

As a collective, we could alert one another, so that when a dirty client got turned away from Monaco and aimed himself toward Luxembourg or Liechtenstein, they’d be watching and waiting for him.

Luxembourg offered to host our first formal meeting, to which we would invite Malta’s intelligence service.  Marco, as its host, would follow up on my contact with the Vatican, Domenico Giani, and invite him, too.

And I would drive to Andorra presently and determine the disposition of that microstate’s representatives for attending an October confab.

We agreed that Iceland and Cyprus should be kept in abeyance until when we were better organized.

SISMI had already offered to help with San Marino.  I’d wait to see how that played out.

Following lunch, we boarded the boat belonging to my deputy and cruised Villefranche and Cap Ferrat.

Clair George, the former spymaster phoned me at 5:15, checking to see if I was still alive.

“You need more sleep,” he counseled.

That evening I introduced my two friends from Luxembourg to SIGER’s Yves Subraud on the Miramar terrace bar and set them loose to speak French for 90 minutes.

Subraud confirmed what I had already conveyed to them:  so far as Monaco intelligence was concerned, I was the only game in town.

JL reported to me that Samy Maroun wanted to give him 10,000 euros “for bringing me luck.”

(Word had filtered through JL's circles that he was involved in sensitive work for his blood relative, which made him more of a lightning rod than usual.)

The Prince and I finally met in private on July 12th, a 75-minute meeting in his office.  Although my agenda was huge, I’d decided not to come on strong.

“I’m forever bouncing in here with facts and figures and findings,” I said.  “What would you like to talk about today?”

The Prince shrugged and smiled.

So I consulted my agenda.

JL:  he had found his niche with me, would make a superb asset and spy for our service.  JL had imbedded himself with Jean-Paul Carteron and would travel with Carteron to Slovenia, then Switzerland.  Carteron and Samy Maroun and others were trying to use him as access to the Prince; we would reap good intelligence on their activities and contacts.  We knew, for instance, Carteron brokered consulships from Balkan countries, including one for Jan Kerwat, a Libyan-born Italian national who now represented Croatia in Monaco.

“Would you like the Bulgarians to revoke Carteron’s own honorary consulship and teach him a lesson?” I asked.

Yes, the Prince replied, he’d like that very much.

Chalva Tchigirisnky:  I conveyed that this Russian linked to organized crime figures in Russia including one of the Red Mafia’s biggest names, Simeon Mogilevich.

Sergey Pugachev:  The Prince had heard about Pugachev’s interest in contracting SBM to manage his new Moscow hotel.  He concurred that I should run traces on him, hence this new assignment.

Micro-Europe intelligence association:  The Prince expressed great pleasure with our progress.  I told him about my visit to the Vatican, where I’d discovered they were actually a macro-state—and I informed the Prince I would visit Andorra that week and try to enlist that “duty free” principality, tucked into the Pyrenees between France and Spain, into our club.

SIGER:  As we had discussed seven months earlier, I suggested the Prince remove Negre as chief as he had been talking to others about the Prince’s   “impeachment.”  Again, I stressed the need for restructuring, which the Prince had actually ordered through JLA to no avail.  I re-emphasized that we had been held up in our investigations of Biancheri and Narmino because SIGER, unlike police intelligence units in most parts of the world, could not even access phone records.

Operation Hound Dog:  I recounted FLOATER’s experience with Roger-Louis Bianchini and conveyed that reporter’s perspective on Monaco and the Prince.

Franck Biancheri:  In the Prince’s mind, Biancheri’s impressive new titles were just a means to evict him from the finance ministry.  He seemed oblivious to the public’s perception that Biancheri had been promoted, as spun by Proust.  “Where did you hear that?” the Prince demanded.  Answer:  From just about everyone, except Biancheri himself, who understood what truly transpired.  (Biancheri had been moved to a small office and lost his parking space.  Seething, he had apparently uttered in front of my asset HUNT, “I will sit by the river and wait for the corpses of my enemies to float by.”)

Philippe Narmino:  I provided LIDDY’s new documentation, adding that Slovenia’s intelligence chief had offered to assist with this enquiry, and to provide the additional validation we needed—the very essence of why liaison partnerships are important.  I walked the Prince through the money trail, and provided names of those who greased the action on Narmino’s behalf:  Miodrag Maksimovic in Bosnia and Davor Holjevac in Croatia.

Next morning, I met with JLA and briefed him.

I think I was the only person he trusted to make appointments with the Prince directly and then tell him honestly about our discussion and its outcome.

“Proust knows you’re out there,” JLA told me.  “He still thinks you’re a CIA guy and that I brought you in.”