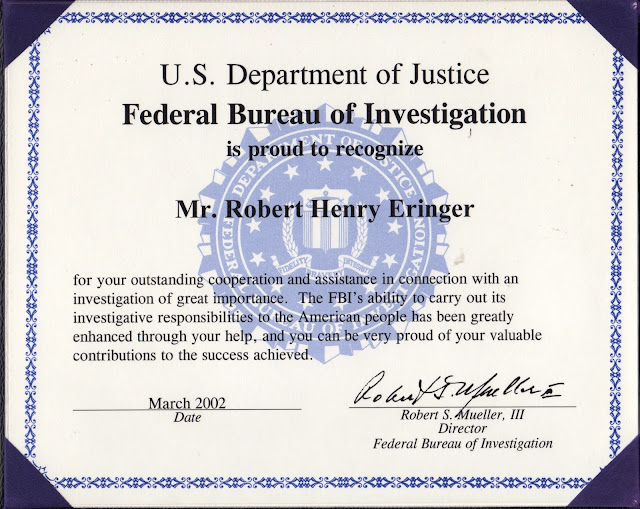 At our last meeting, when I dropped her at Santa Barbara Municipal Airport, she told me, "Never, ever go to Moscow, even if they [the Bureau] say it's safe."

A pretty, young special agent stepped into Jackie J's shoes on the Edward Lee Howard case and telephoned me soon after her predecessor's departure with a status update:

We're still in a holding pattern, but we'd like you to stand by.

"It's been over eight years since I started work on Howard," I finally said.  "I've been standing by for seven of them.  I need a sense that you folks aren't just pulling my chain.  How about a letter from your director saying that your shop is serious about this?"

Two weeks later I received a generic certificate in a presentation binder thanking me for my "cooperation and assistance in an investigation of great importance," signed by FBI Director Robert W. Mueller III.

Not only was this not what I had requested, but, based on what I'd been doing (and still doing) for the Bureau going on nine years, it was absurd, if typical of the way Headquarters responded to requests from the field.

The new Special Agent on the case wanted to discuss Howard.

Could we meet in Washington?

Of course, I said.

She flew into DC with a female colleague from Albuquerque and we sat down for dinner at Clyde's, Chevy Chase, joined by a gal from Headquarters.

I looked around me, three pretty females.

"Are you women taking over the shop?" I asked.

"Eight years ago," I said, "I'd be sitting at this same table talking about Ed Howard with a bunch of big ugly guys.  So, what's up?"

They wanted to know, could I still rendition Edward Howard?

"But it looks very promising," said the special agent from Albuquerque.

"Sure it does."  I chuckled some more.

"This is the first time," said Albuquerque, "that the initiative to rendition Howard has come from Headquarters."

I turned to the gal from Headquarters.  "Yeah?"

What had apparently transpired:

In the wake of congressional and media criticism over the FBI's pre-9/11 disconnections, the Bureau needed a PR-fix.

The gal from Headquarters continued:  "I need to present a plan to my superiors.  How would you rendition Howard?"

"Easy," I said.  "I'd tell Howard we finally have a publisher for Spy‘s Guide, but we need to update it.  I could get him to visit any number of European capitals."

I should have said, Cash my chips, I'm outta this nuthouse.

What I actually said:

"It's a long story, documented in your case file, which you should probably read.  The upshot is this: I can lure Howard to just about anywhere in Europe.  It's for you to tell me where you want him."

I'd already been through this drill so I knew what  needed to be done better than they.

"You need to find a country that will let you nail him in the international corridor of an airport."

The gal from Headquarters scribbled notes.

"If I got burned by Hanssen," I added, "they haven't told Howard.  I would have noticed something in his commo with me.  I don't think they trust him anymore."
"No, why not?"

"Because if you read your files, you'll find that for years he's been selling out everything he learns from his KGB buddies to me."

I had become the institutional memory on Edward Lee Howard. 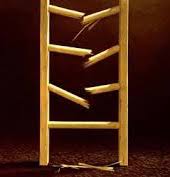 "Okay, don't do anything yet," said the gal from Headquarters.  "We need to run this up the ladder."

They were still running it up their broken ladder when, 17 days later, under circumstances that remain murky, the grim reaper came-a-calling for Edward Lee Howard.

The CIA defector had met a rather freakish death in Moscow.