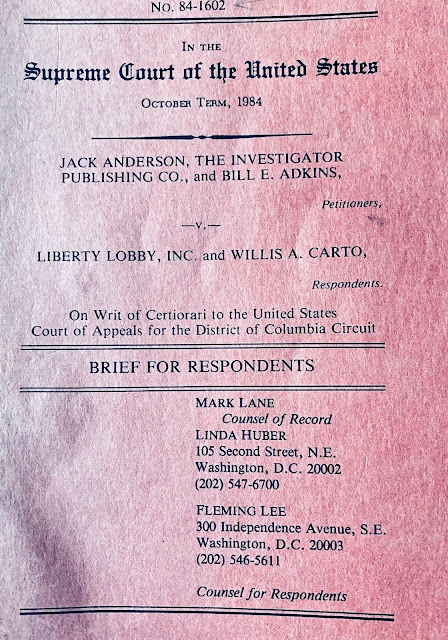 In September 1981, a short-lived magazine called The Investigator, created by syndicated columnist Jack Anderson, published my in-depth investigation of Liberty Lobby, a neo-Nazi organization that masqueraded as being populist. The article exposed Willis Carto as the mysterious figure behind Liberty Lobby and its weekly anti-Semitic newspaper, The Spotlight.

Carto took umbrage and sued The Investigator and Jack Anderson for defamation.

The case went all the way to the U.S. Supreme Court, which ruled against Liberty Lobby on the basis that the plaintiff  "had not provided clear and convincing evidence."

(Apparently, this case is now required reading at many law schools across the nation.)

Liberty Lobby could not name me as a Defendant even though I was the true author, having researched, investigated and written the piece.

This was because The Investigator's editor improperly gave the byline to a magazine staffer, Charles Bermant, who had conducted supplemental research.

I  have not, until now, refuted the nonsense spewed by all parties.

I had evidence in my possession to back up every point of my story, including tape-recordings and transcripts of interviews conducted with ex-Liberty Lobby employees, among others who'd had dealings with Willis Carto.

Oddly, these extensive notes/recordings/transcripts were never requested for review, either before the piece was published or after the lawsuit was filed.

We had tea at the hotel where he stayed, Inn on the Park.

When I asked what Branson wanted, he whimsically said he just needed to be able to tell the Court that he had met me in person and I truly exist.

The assertion that "Carto often observes interviews of prospective employees through a mirror" came from a former senior Liberty Lobby employee who claimed (to me directly) that he had personally witnessed this behavior.
A second source, also an ex-Liberty Lobby employee, corroborated (to me directly).
This was old fashioned, by-the-book investigative reporting (remember that?) as taught to me by legendary Fleet Street investigative reporter and editor Laurie Manifold.
In defence of dirt-digging journalism - spiked
As for "a drawing of a Hitleresque person, allegedly Carto":
The draft I submitted to The Investigator was a typescript without illustrations of any kind.
Hence, this drawing did not come from me, as Charles Bermant erroneously stated, but most likely was produced by The Investigator's own art department.
That said, I have no doubt, based on my investigation, that Willis Carto admired Adolph Hitler; that the illustration truly reflected his leanings.
It was Carto, for instance, who created (from behind the scenes) the notorious Institute for Historical Review, which published books and held conventions to promote a revisionist theory that the Holocaust was a hoax.
The Institute for Historical Review / Holocaust denial / History / Auschwitz-Birkenau
Every other point in my story that Liberty Lobby alleged to be "defamatory" was similarly sourced and documented as true. 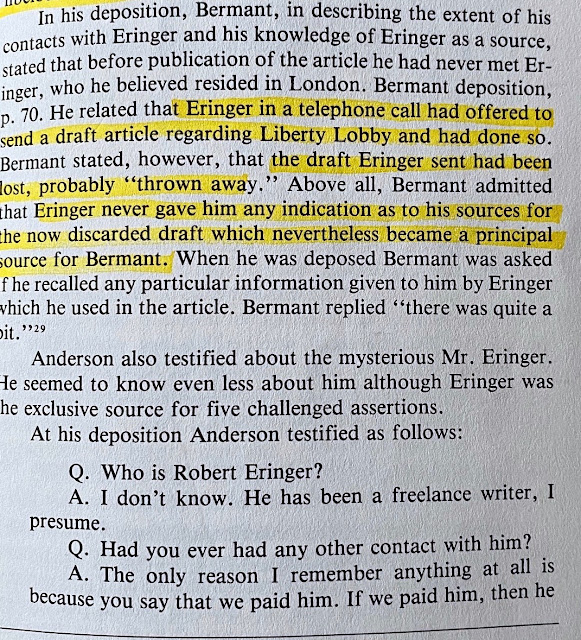 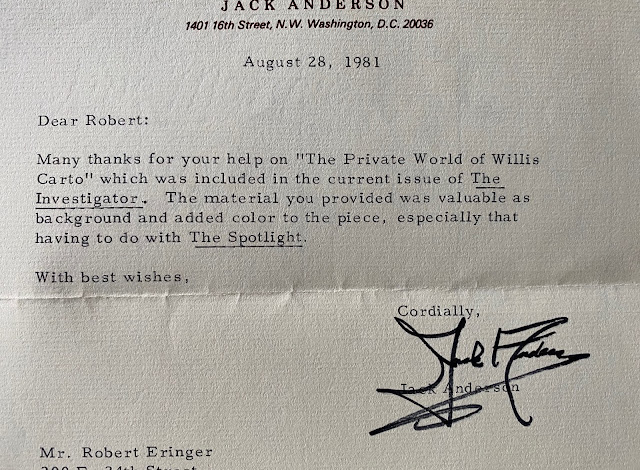 Despite Charles Bermant's assertion that we never met but had spoken only by phone, we did indeed meet once at The Investigator's offices.
And I was in contact (through several phone calls) with Joseph Spear, one of Jack Anderson's  key lieutenants, mostly to negotiate my fee.
Neither Bermant nor Spears ever asked me about my sources nor asked to see evidence that supported my story.
Had I been a named Defendant in the action, all of my files would have been "discovered" and Liberty Lobby would have been sent packing long before this case reached the Supreme Court. 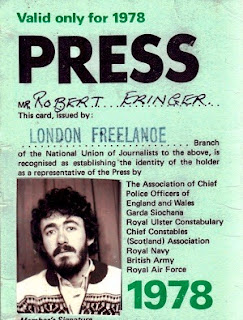 Lesson to publications:  Don't steal credit/bylines from freelance journalists.
As usual, those who benefitted most were lawyers.
P.S. Five months before The Investigator article appeared, Mother Jones magazine published a condensed version of my piece, for which I was credited.
Even though this article included some of the same points alleged as "defamatory" in their lawsuit against The Investigator, Willis Carto never complained to or took action against Mother Jones. 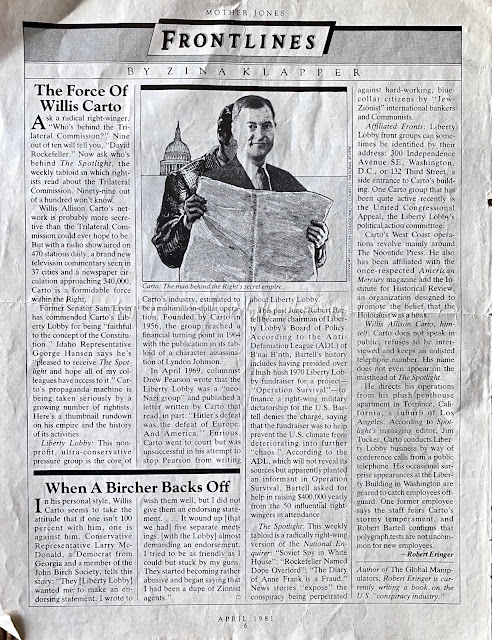 And if you think all this is strange, it gets even weirder.
In December 1986, a few years after Liberty Lobby's lawsuit against The Investigator, Willis Carto wrote me a brief letter in which he (quite absurdly) offered me a gig as "London correspondent" for The Spotlight.
He added this postscript: "Our rates are better than Jack Anderson's." 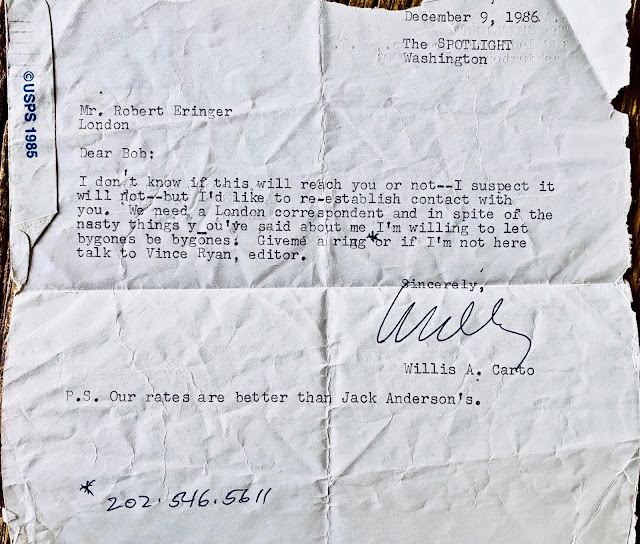 Go figure.
Posted by Robert Eringer at 7:42 AM