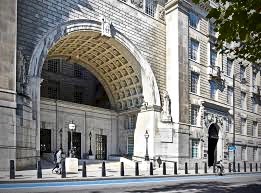 Richard Thornington no longer possesses an entry pass to MI5 headquarters at Millbank along the River Thames, so when he unexpectedly appears in the lobby he must ask the security desk to ring upstairs.

Within a minute, Thornington's presence in the lobby is met with surprise and consternation by Colin Smythson, his former boss in Division F, who, not wanting his "reassigned" employee upstairs, deigns to come down.

"Richard."  Smythson forces a smile as he limply shakes the hand of his surprise guest—the last person he expected, or wanted, to see.  "What happened?”

Thornington shrugs.  "What do you mean."

"Weren't you posted to a special unit in America?"  Smythson pats his hair, ensuring the comb-over is in place.

"Then what are you doing here?"

"Actually, I wanted to thank you," says Thornington.

"For helping to secure my new position in America.  It's brilliant."  Thornington smiles.  "May I buy you a pint?"

"Um, I 'suppose," says Smythson.  He certainly did not want to ask Thornington into the building.  Why, he'd only just dealt with the damage left behind by this maverick know-it-all.  Nor did he want to be seen drinking with his old nemesis at MI5's local pub around the corner.  "I have an errand in Knightsbridge," he says as he guides Thornington out the building to hail a passing taxi.

The two men climb in and sit across from one another.

"You're living in California now, aren't you?" says Smythson.

The ride continues in silence until arrival. The two men alight beneath a gray drizzle and enter Paxton's Head pub where Smythson digs into his pocket for a round.

"No, my round," says Thornington.

"Make that two," says Thornington.  He turns to Smythson.  "Haven't had beer in ages.  I've been drinking wine, mostly pinot noir from the local wineries.  Thank you for the best assignment I've ever had."

"It was my pleasure," says Smythson, fully meaning it.  "What are you actually doing, if I’m allowed to know?"

"Anything I choose," replies Thornington whimsically.  "And I've chosen quite a fascinating line of enquiry."

Smythson shudders.  This was not what he wished to hear.

"I was hoping," Thornington gazes into Smythson's eyes, "that I might gain access to some of my old files."

"That’s out of the question," snaps Smythson.

Thornington chuckled.  "Really?  Why can't I see my old files?"

"Because, because they've been shredded."

"That's very disappointing news," says Thornington.  "Not least because those files dealt with topics that do in fact remain current."

Smythson shakes his head.  "No, no. No longer current at all, from 5’s perspective."

"Yes, well."  Smythson shuffles his feet and gulps bitter from the barrel-shaped glass mug.  "How long are you in London?"

"I had hoped my visit would be brief.  Review my old files and return to base.  But now..." Thornington shrugs.  "I may have to stay on a bit, try to reconstruct what I once had."  He pauses.  "And possibly look into why my old files were destroyed after my departure."

"They'll be no need for that," says Smythson.

"Maybe not a need," says Thornington, taking a stab at Jeff Dalkin lingo.  "But certainly, a want."

"Well, you won't get far, I'm afraid."  Smythson's tone hardens.  "I made that decision myself."

To destroy my files?"

"We had a review, an assessment of those projects.  We felt they were destructive to the mission at hand."

"Ah," says Thornington.  "You mean if Parliament ever ordered an oversight enquiry..."

It takes Colin Smythson all of two minutes after ensconcing himself back in his office to connect by internal phone with MI5's Personnel Chief, with whom he raises holy hell about why Richard Thornington had not been fired outright, as he, Smythson, had recommended.  And wasn't the point of transferring this uncontrollable maverick to an innocuous unit far, far away—wasn’t that supposed to keep the bloody fool from stirring up trouble in London?

The Personnel Chief, of course, agrees, having no time for trouble-makers himself and who would have preferred to handle Thornington in the manner with which personnel chiefs are accustomed to dealing with problem employees:  sack them.

And thus, the Personnel Chief schedules an appointment to see MI5's Chief.

The Chief, indeed, is terribly disappointed with this situation, so after dismissing his Personnel Chief he telephones, by secure line, his opposite number in the United States.

The FBI Director, knowing only a little something about the C-15 misfit unit, thanks MI5's Chief for his concern and promptly summons R. James Cloverland, his assistant director for national security for an explanation.

And Cloverland, who had not yet told the Director that the secret misfit unit had become (even more secretly) operational in recent days, briefs the Director on this odd development.

The Director considers Cloverland's words, then delivers this pronouncement:  The misfit unit has two weeks to wrap up the Zudex project.  After two weeks, successful or not, the misfit unit must return to fantasia mode.  And get that cocky Brit, Thornington, the hell out of London.

Tail tucked firmly between his ample cheeks, Cloverland returns to his office and, hands trembling with anger, connects to Jeff Dalkin.

"Yeah-what?" says Cloverland.  "I'll give you yeah-what.  I just had my chops busted by the Director.  I have to hear from him that your Brit is in London?"

"One little guy can do all that in one day?"

"Would you please remember the whole point of this?" says Cloverland.  "Perfidious Albion wanted their maverick gone.  What they definitely did not want was for him to show up on their doorstep—and demanding secret files?"

"As I understand it, my Brit—lizard-licking limey—was actually looking for his own files."

"They don't belong to him anymore," snaps Cloverland.

"They don't actually belong to anyone anymore," says Dalkin.  "Perfidious destroyed them."

"Think about it," Dalkin interjects.  "Why does anyone destroy files?"

"What they do is not my business.  And it's definitely not yours.  Why the hell is Thornington in London anyway?"

"No, no, no—not by any means.  I want you in my office tomorrow.  And come equipped with a full explanation."  Cloverland slams his phone into its cradle.

Although Jeff Dalkin normally avoids making phone calls to Bacon, Hump, assuming that each call to this blue-chip law firm is logged and billed in quarter-hour units, Dalkin connects to Bradley Fatwood.

"This deposition," says Dalkin.  "Any chance we could speed it up?"

"Yeah, right.  To contradict George Bernard Shaw, let’s go ahead and wrestle with a pig—it’s fun to get dirty.  Plus, I got no choice so we might as well get it on."

"When do you have in mind?"