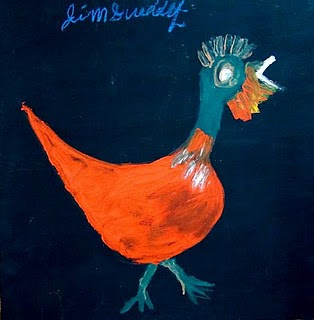 The J. Edgar Hoover Building in Washington, D.C. is the only place in the world where Jeff Dalkin is not mistaken for Bruce Willis.

Most employees, especially ten-year veterans, know exactly who Dalkin is—and know enough to steer clear of him.  Any association with the curse-spewing ex-special agent—so goes the myth—means immediate demotion.

And Dalkin likes it that way.  In fact, he helped spread this rumor himself.

So, whenever Dalkin appears at the Badge Room, where all visitors must sign in and await an escort, the whispering begins, preceded by a hush.

Those who have to interact with Dalkin do so at their own peril.  Because for Dalkin, just having to be present at this concrete bunker with suits around him is enough to warrant the unleashing of torrential Tourettic outbursts.

The large African-American woman who looks at all badge-seekers as potential terrorists does not stand a chance.

"Black boobs," says Dalkin when she asks his name.

"Oh, I remember you," she says, picking up a phone.  "You'z that foul-mouthed fool who thinks you'z Bruce Willis."

"Fat black ass on my face."

The receptionist does more than just note Dalkin's likeness on the license; she jots down his address.  "I'm gonna tell the sisters where you live."

"Yeah, tell 'em they can take turns licking my…”

"That's it."  She throws the license at Dalkin.  "I'm calling security."

"Call the Easter Bunny if you want."

The exasperated woman huffs and puffs and Dalkin sits in a chair to wait for an escort.  Two visitors sitting next to him get up and move to chairs further away.

When Cloverland's secretary appears to vouch for Dalkin, the woman refuses to hand over a badge and wants Dalkin arrested so an argument ensues over who is in control of such procedures.

"I had my boss blowing farts up my nose yesterday.  All because of you."

"Hey, none of this was my idea," says Dalkin.  "I'm just doing what you wanted."

“Allowing that Brit return to London?"

"I didn't actually allow that Brit—lizard-licking limey—to go to London.  I actually ordered him there."

"We're on a mission, to get the goods on Zudex.  Our raw intelligence comes from our Brit—from his special source.  It was only when he actually started delving into the Red Mafia-SVR overlap though his special source that Thornington actually got his ass kicked out of MI5.  He insists there's a Russian mole inside MI5.  And I'm starting to believe him."

"Who cares?  Your mission—and it's going to be brief, very brief—is Zudex.  What the hell does a possible mole in MI5 have to do with Zudex?"

"Think about it," says Dalkin.  "If, that is, they still allow freedom of thought in the J. Edgar Hoover—homo hypocrite—building."

"Why don't you just explain it to me."

"Okay, I will," says Dalkin.  "Before Thornington came to us, he was working on the Red Mafia-SVR overlap.  That's how we know about Zudex—mostly through his special source, who his superiors at MI5 did not want to believe.  So of course I'd like to see those files.  Because if the special source was right about Zudex then..."

"Then nothing," says Cloverland.  "Your mission ends with Zudex.  Or in two weeks, whichever comes first, by order of the Director himself.

"…then Zudex is connected to a lot of other Russian entities," says Dalkin.  "More Red Mafia-SVR overlaps.  That's actually why I want the files.  But the files were destroyed.  Add it up, Jim.  This Brit’s superiors get rid of him when he buys into this special source, a source that turns out to be highly credible. Then someone, apparently his division chief, destroys the files.  Thornington is actually onto something.  There is a Russian mole—a high-level one—inside MI5."

"Sure it is.  If there's a mole tipping off Moscow, I can actually use that to our advantage.  But I had to be certain Thornington was actually right on track.  And now I'm certain."

Dalkin shakes his head.  "This is good stuff.  At what point in your career did you actually get your nuts neutered?"

"Yeah, well, I actually resent doing good things, laying the groundwork for more good things then getting bureau-crapped on."

"Two weeks," says Cloverland.  "You've got two weeks.  No, your time is running out.  You've actually—shit, it is contagious—you’ve actually got one week and six days.  And that's the Director talking, not me."  Cloverland pauses.  "Oh, and I've got a new recruit for your unit.  The way your unit was supposed to operate, which, in fact, means not operate.  And good luck."  Cloverland chuckles to himself, savoring his revenge.  "She's a militant feminist."

"Oh yes. And by the way, where's that other maverick of yours?"

Next stop for Jeff Dalkin is the offices of Bacon, Hump where, over the course of three-and-a-half hours, Bradley Fatwood takes Dalkin through the rudiments of deposition and walks him through a batch of documents from Ding-a-Ling Widgets that plaintiff's attorneys obtained through discovery—exhibits that Worthog senior and Worthog junior would refer to in his questioning.

"Main thing," Fatwood says, "listen to the question carefully and answer it directly in as few words as possible.  If you know the answer, tell it truthfully and succinctly.  If you don't know the answer, just say I don't know. If you don't remember, say I don't recall. Don't speculate and don't guess.  And don't feel tempted to say anything that you think helps your case.  Remember, it's their deposition.  You have nothing to gain and everything to lose.  Don't talk to anybody else about anything before you're sworn in or during recesses."  The lawyer pauses.  "And look presentable, your deposition is going to be video-taped."

"Attorneys do it so that if you die or disappear before the trial, they can play your sworn deposition to the jury."  Fatwood frowns.  "The Worthogs will try to rile you.  Don't get angry.  Stay calm, however much they bait you.  Most important, get a good night's sleep.”

Posted by Robert Eringer at 7:09 AM