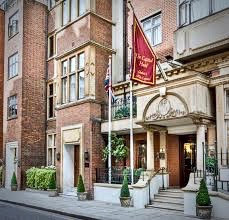 Three thousand miles and an ocean away from Jeff Dalkin's deposition in Washington D.C., it is just past four o'clock in the afternoon in London where Richard Thornington awaits a very special guest for high tea inside the Capital Hotel on Basil Street in Knightsbridge.

When the Russian, a large, husky man with fleshy cheeks and a bushy moustache finally arrives, he appears to Thornington more nervous than when last they met.

He was late because he had taken the tube (subway), two buses and a taxi to reach this destination.  He had alighted at Harvey Nichol's, top end of Sloane Street, descended into Wagamanna, a fashionable Japanese noodle restaurant, cut through men's fashion, elevated up to the ground floor and made his way to Basil Street by cutting through the Millennium Hotel.

Only when he was completely satisfied that he had confounded whatever surveillance might have attached to him did Igor Sokolov appear at Thornington's rendezvous site.

Perspiring, as much from the news he possessed as the trek he had undertaken to meet his British friend, Sokolov quietly seats himself.  “Hi,” he says to Thornington.

Happy is a difficult concept for a Russian to understand; especially this Russian, this day.

"A problem," Sokolov whispers, hunching over the table.

"Oh?"  Thornington smiles, as he does with any new problem—a quality that drove his superiors at MI5 crazy.

"A CIA man, he is offering service to SVR."

Thornington shrugs.  "Very interesting.  But why is it a problem?"

"This man, he knows about SVR-Red Mafia operations. Our bizniz."

"He offers to sell," continues Sokolov.  "Directly to Zudex."

"In Monaco?"  Thornington's mouth is dry having lost all its moisture

Sokolov nods.  "He makes offer, SVR check him, he is genuine."

"Do you have a name?"  Thornington already has a strong suspicion who.  But in the espionage business validation is everything.

Sokolov shakes his head.  "Nyet.  Very sensitive.  You can imagine."

"Has this CIA man told them anything yet?"

"Nyet.  He offers.  He asks big deal, big money.  They check.  I hear this morning, Moscow decides to make deal.  Now they wait him to return."

Both men remain mute while a waiter serves a pot of Earl Grey tea and a three-tiered platter of cucumber sandwiches and miniature cakes.

"Can you get a name?" asks Thornington.

Sokolov shakes his head.  "Too risky.  His name now has red star.  Big red star.  If I ask, case officer in charge hears.  He calls me, he says, 'Why you are interested?'"

"Do you still have the old files you gave me?" asks Thornington.

"Nyet."  Sokolov shudders.  "I burn everything."

"Can you recall anything from the files?"

"Try to remember," says Thornington.  "I need to start over.  My service destroyed what I had."

"You know who what?"

Thornington almost falls out of his chair.  "An actual identity?"

This, in itself, does not deter Thornington.  The Russian often speculated that anything and everything could be traced to him—a paranoid stance inherent in the Russian service, if not most Russians.

"You must have a price," says the Englishman.

"I tell you."  Sokolov's big cheeks flush from the merriment of his proposal.  "One million dollars."

"I can't get that kind of money," says Thornington.

The Russian shrugs.  "How much you get?"

"You check, then always big problem," says Sokolov. "Mole hears, he stops you.  Or runs to Moscow."

"But only a very few people at the top would know," says Thornington.

"You're saying that someone at the top—one of only a handful of people who would be privy to this—that's who the mole is?"

"I say nothing more."  The Russian winks.  "But you see problem, no?  So maybe better we forget."

Sokolov sighs. "You forget how we begin today, with CIA defector?"

"Yes, mmm," says Thornington.  "I need your recollection of past files."  The Englishman produces an envelope.  "For that I can pay you cash."

Sokolov peeks inside and is delighted to see a stack of fifty-pound notes, not twenties.

He pockets the envelope and sighs.

Posted by Robert Eringer at 7:39 AM