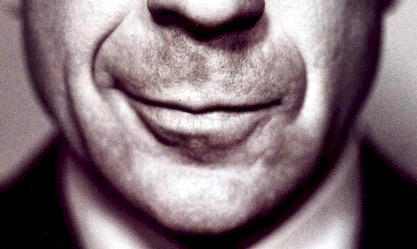 Serafina had arrived with no idea what to expect.  He certainly did not expect Bruce Willis stooled at the bar, beckoning him over.  He hesitates, looks around.

Dalkin waves the CIA maverick in.

Dalkin smirks.  "Long story.  Main thing, I need your help on a project."

Dalkin shakes his head.   "No.  Agency—ass-wipes—business.”

"I hear you're something of a fast-tracker," says Dalkin.

"Really?"  Serafina knows this to be true, but takes a stab at modesty in front of a man he believes to be a movie star.

"Just what I need," says Dalkin.  "Not because it means you're smart, but because I want someone whose career I can have a hand enhancing.  And what I got in mind is a definite career-enhancer."  Dalkin winks.  "If, of course, you take the assignment, Ralphy.   Drink?"

"Sure.  I'll have one of those."  Serafina points to Dalkin's martini glass.

"My outfit,” whispers Dalkin, “is in California."

"We do some very intriguing things.  But it's so sensitive, so secret, I can't really lay it out until I know you're on board."

"I understand," says Serafina.  "But for the purpose of making a decision, can you at least give me a hint?"

Dalkin looks both ways.  "Sure, why not.  You were posted in Switzerland, right?"

Dalkin leans in, forehead to forehead with Serafina.  "You probably had some experience with the SVR teaming up with the Red Mafia."

"Exactly.  But it goes way beyond Switzerland.  The bastards are everywhere."

"That's what we're doing.  We're doing it undercover, with autonomy from headquarters.  And we're doing it better than anyone in the U.S. government—golly-glomping goo-goo butts."

Serafina squints.  "No hassles from headquarters?"

"With you in charge?"

"Please don't be offended," says Serafina.  "But how could you, a movie actor—not an intelligence professional—be facilitating such an important mission?"

"You're not Bruce Willis?"

Serafina considers this in awe.  "Then how come you look exactly like Bruce Willis?"

Dalkin shrugs.  "It's actually the other way around.  That dumb-fuck actor looks exactly like me."

"Are you Willis's twin brother?"

"Does he know you exist?"

Dalkin smirks.  "Sometimes the tabloids report my doings as his doings.  Like when I tip the parking valet a quarter.  He gets called as cheapskate. Or when my Tourette's gets out of hand."

Dalkin nods.  "Certain words set me off.  Like F-F... flatulating fornicators—FBI.  See?  And the names of ethnic food."

"It's the word actually.  It's actually back again, just when I thought I'd actually had it licked.  It's the damn Brit—lizard-licking limey."

"We have a Brit—lizard-licking limey—working with us.  Actually, from MI5."

"When would I start?"

"Immediately," says Dalkin.  "I'm headed back to base tomorrow.  I'd actually like you to join me."

"I see," says Serafina.  "How much time to have to think about it?"

"I actually need a decision by the time our martinis are drained.  Oh, and by the way—when we travel?"

Although Michael Zudex resided in Monaco, the Mediterranean principality known for its ultra-secure streets, he would not so much as visit Davidoff for his favorite Cuban cigar—the Monte Cristo Number Two—without first ensuring that three of his bodyguards were shielding him from possible danger.

Zudex was the ostensible owner of Zudex International, a collection of import-export enterprises headquartered in Monte Carlo.

In fact, Zudex International was a front for the SVR, Russia's foreign intelligence service.

Although Michael Zudex "of Hungary"—born Yuri Ponomarenko, in Moscow—was only the nominal owner of Zudex International, he had made himself very wealthy by aligning the company of his adopted name with the Red Mafia.

On the surface, Zudex traded in furniture and kitchen appliances.  Remove the veil and the true money-spinners at Zudex International were contraband weapons and heroin.

Two Zudex employees in the Ukraine who thought they were smart enough to blackmail their boss now rested upon a Mediterranean seabed, two miles offshore.

Michael Zudex could put on good manners when the occasion warranted, but his temperament could not be so easily altered.  New riches had bestowed a new arrogance upon Zudex.  And now, in Monaco, he believed himself beyond reproach, even from his SVR masters.  But Zudex took no chances with his personal security.

It was this very arrogance and dislike of taking chances that led Zudex to an extreme decision on how to handle a pesky reporter from The New York Times.

Jason Groner from the Times’ London bureau had been researching Zudex International's various trades.  Somehow or other, Groner had managed to cultivate a source inside the Zudex organization.  His subsequent inquiries—monitored by Zudex security operatives—suggested that Groner was onto them.  And when this reporter suddenly appeared in Monaco to demand an interview with the boss, Michael Zudex agreed through his secretary to meet Groner aboard his yacht, berthed in the port of neighboring Cap d'Ail.

The reporter turned up on time for a late afternoon rendezvous.

Zudex did not.  He remained in his office, where secretaries and assistants could see him.

At the sea bottom.

Three days after hearing nothing from Jason Groner, colleagues at the Times’ bureau in London notified the U.S. Embassy that he was missing on assignment; that a crime may have been committed against this U.S. citizen.

The Legat’s office relayed their report to FBI headquarters in Washington D.C.

Due to the sensitivity of this situation—not least because The New York Times trumpeted their reporter's mysterious disappearance on page one—it quickly worked its way up to the desk of R. James Cloverland, the FBI assistant director for national security.

"Zudex," Cloverland snaps at a subordinate.  "Find out what we know about a Michael Zudex and Zudex International."

Posted by Robert Eringer at 7:37 AM