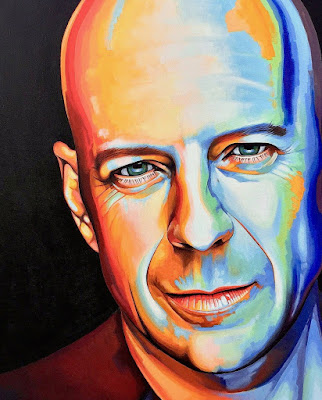 "Lively weekend?"  Dalkin winks at the corpse-like senior Worthog as he rumps his rear.  "I'm sorry, it's just that you don't look well."

The videographer swears in the deponent.

"Mister Dalkin," Worthog growls.  "I request for the record that you turn off your cell phone."

"Why is it impossible?"

"Because I don't have a cell phone with me."

"Mister Dalkin."  Worthog straightens his spectacles.  "For whom do you currently work?"

Dalkin looks to his lawyer to object, but Fatwood remains silent.

"That has nothing to do with your case," says Dalkin.

"Are you refusing to answer?"

Worthog focuses his gaze on Fatwood.  "I suggest you counsel your client that the Court has compelled him to answer questions pertaining to current employment."

"I have to use the bathroom."  Dalkin unclips the microphone from his shirt.

"We just started," Worthog erupts.  "I don't agree to a recess!"

"No?  You want me to pee on your shoes?"  Dalkin doesn’t wait for an answer, but skips out, Fatwood at his heels.

Dalkin turns and points to the hospitality room.  "In there."  Dalkin closes the door and turns on his lawyer.  "National security just cut in.  Big time."

"My current client is the U.S. government—golly glomping goo-goo butts. I am running a very sensitive and highly classified intelligence project and I am not permitted to disclose it to anyone who does not have a security clearance and cleared to know what I'm doing, which is almost no one. USG would never clear those Worthogs to see anything except used toilet paper."

"Maybe you should tell me about it," says Fatwood.

"How high do your security clearances go?"

"We have attorney-client privilege," adds Fatwood.

"No, you won’t.  An explanation itself is secret.  They’d leak it to the media just to harass me.  Don't you get it?  They're looking for ammunition to force a settlement.  And Rigglesworth has it in for me because she got fooled. And she, being a reporter, she'll use everything she can get from litigation to write about this situation, including everything she can find out about me."

"What do you want me to do?" asks Fatwood.

"Opposing counsel will want to be present."

Dalkin shakes his head.  "In that case, never mind.  I'll get a gaggle of government lawyers to go see the judge—jiggering jerk-off."

"Hmmm."  Fatwood does not want to be upstaged by other attorneys.  "Here's what we're going to do.  You should answer the question by saying you currently have no clients.  Once they produce a transcript of the deposition for you to read, you'll have thirty days to review it and make corrections before it becomes a permanent record.  By that time, we can hopefully sort this out and you can correct it—or not—accordingly.”

Dalkin grunts approval and, moments later, the two men reseat themselves opposite the Worthogs.

"Mister Dalkin," said Worthog. "For whom do you currently work?"

"You are self-employed as a consultant?"

"My question is, for whom do you currently consult?"

"Who are your clients?"

Dalkin shrugs.  "I'm looking for some.  Got any ideas?"

"Who was your last client?" asked Worthog.

"Did this client have a name?"

"Yes, but turned out it wasn’t real.”

"What is that name?"

Worthog scribbles a note.  "What was the nature of the consulting..."—Worthog contorts his face to show disdain--"...that you did for James Riddle?"

"He wanted to know the truth," says Dalkin.

"The truth about what?" asks Worthog.

"UFOs, who killed JFK," says Dalkin.  "Who really runs the world.  That kind of thing."

Worthog harrumphs. “So, who killed Kennedy?”

Dalkin looks to Fatwood. “Am I supposed to answer that under oath?”

Fatwood shrugs. “It’s about time somebody did.”

“Okay, why not.” Dalkin reverts his gaze onto Worthog. “Meyer—silenced wife—Phillips, Harvey—fat-ass, Veciana, Sturgis, Morales and… you want the shooter too? Sarti—Corsican cunt.  A rogue op—crypto-cruds—they’re all rotting in hell.”

"Is that really a question?”

"You kidding?" Dalkin winks. "I know more things by accident than you'll ever know on purpose."

"Why should I believe you?"

"Who the hell cares whether you do or don't? It'll all become clear when the fucking records are finally unsealed."

"It would be correct to say that you sold James Riddle information?"

"How much did James Riddle pay you for this so-called truth?"

"I can't remember the total amount, if that's what you're asking."

"Which part of it can you remember?"

"I'm sure there's a lot you don't understand."

"You sold information to the FBI?"

"I didn't know it was the B-B... ball-less bargsters—Bureau."

"You were doing something illegal?"

Worthog settles back into his seat.  "Who else have you consulted for?"

"Michael Eisner, the chairman of Disney?"

"We have a right to know if there is a pattern to Mister Dalkin's tortious interference of the legitimate business affairs of other people," says Worthog.

"For Michael Ei..., uh, I helped him try to catch a lunatic who was murdering cartoon characters."

"Me.  I helped Disney catch that artist, Stukey, who killed Mickey Mouse."

"You must have been paid a lot of money for that," says Worthog.

"How much money did you make from Disney?"

"Depends how rich the client—dumb-mutherfuck—is."

"So how much did Disney pay you?"

"Where is that money now?"

Dalkin turns to Fatwood.  "Bacon, Hump has some.  The IRS—thieving thugs—they have some."

"The rest of the money," asks Worthog.

"That's my point," says Dalkin.  "Between lawyers and taxmen there is no rest of the money. No balance.  Zippo."

Worthog looks into a portable filer, extracts a manila envelope and peruses some papers.  Then he scowls at Dalkin.  "Did you tell Ms. Rigglesworth that she was wasting her time researching Ding-a-Ling Widgets?"

"I only echoed what about twenty publishers already told her," says Dalkin.

"And Ms. Rigglesworth had good reason to rely on your advice, correct?"

"But you were pawning yourself off as Bruce Willis, correct?"

"Not correct. She seemed to think I was Bruce—willie-wankstain—Willis.”

"Presuming she thought you were Bruce Willis and would presumably take advice given her by a Hollywood heavyweight like Bruce Willis, she was led by your advice, correct?"

"Advice is advice," says Dalkin.  "People take it or leave it. Presumably."

"But you led Ms. Rigglesworth to believe you would represent her, correct?"

"No, not correct.  Very incorrect.  As I remember it, Rigglesworth already had an agent, a literary agent, so she was represented and that's who she should have presumably been taking advice from, not Bruce—willie-wankstain—Willis, if that's who she thought I was."

"And you suggested that Ms. Rigglesworth research another subject, correct?"

"What was the other subject you suggested?"

"Well, it wasn't just a suggestion. Rigglesworth had already dabbled on the other subject herself."

"How did you know that?" snaps Worthog.

Dalkin rolls his eyes.  "Because she told me."

"What was this other subject?"

"Rigglesworth seems to fixate on people who are successful and rich. She'd already written about The National Enquirer and the gaffer who used to own it, Generoso Pope.  All I did was suggest that she focus on that for a while."

"Didn't you tell Ms. Rigglesworth you thought a book about the National Enquirer would make a good movie?"

"I probably said it might make a good movie," says Dalkin.

Dalkin shrugs.  "Because it would make a good movie."

"Did you lead Ms. Rigglesworth to believe that if she devoted time and effort to developing this subject as a book, you would try to make a movie out of it?"

"Did you tell her, Mister Dalkin, that you would try to make a movie about the National Enquirer?"

"What the fuck do I know about making movies?"

"Of course it was a ruse, you dickhead."

Worthog recoils.  "A ruse to sidetrack Ms. Rigglesworth and waste her time on an impossible subject."

"Excuse me?  You're forgetting something important.  I paid her to develop a story about The National Enquirer.  More money than she deserved..."

"You knew full well that The National Enquirer's founder was secretive about his privacy, didn't you?"

"Only from what Rigglesworth wrote herself."

"You knew you were sending her on an impossible assignment."

"I didn't send her anywhere," says Dalkin.  "Aside from which, I bet a lot of assignments would be impossible for Rigglesworth because, judging by the Complaint she helped you write up, Rhoda looks at the world as if was a disciple Lyndon Larouche.   I'm surprised you haven't named the Trilateral Commission as a co-defendant."

"Isn't it true that you chose The National Enquirer as a subject because it would be reasonable to Ms. Rigglesworth that Bruce Willis, who you were pretending to be..."

"That Bruce Willis,” continued Worthog, “would have a vested interest in embarrassing the Enquirer?"

"But you must admit it makes sense that Bruce Willis would want to expose the Enquirer in retaliation for constantly exposing him?"

"Objection," says Fatwood.  "I don't know what this has to do with anything."

"It shows that this was a well thought through scam to tortiously interfere with Ms. Rigglesworth's legal right to earn a living," says Worthog.  He looks at Dalkin.  "Correct?"

Dalkin shrugs.  "The National Enquirer is a great story.  I was doing Rigglesworth a favor by suggesting it."

"You even gave Ms. Rigglesworth material on the Enquirer to further encourage her, isn't that correct, Mister Dalkin?"

"Material that connected the Enquirer's founder, Generoso Pope, to the CIA.  Correct?"

"From where did you get such material, Mister Dalkin?"

"Uh-oh, now you want to implicate the CIA—crypto-cruds—into a huge conspiracy to dupe poor Ms. Rigglesworth?”

"I demand an answer to my question."

"No," says Dalkin.  "CIA—crypto-cruds—did not give me information on anything to do with the Enquirer."

"Has the CIA given you information on anything else?"

Dalkin turns to his lawyer.  "Why aren't you objecting?"