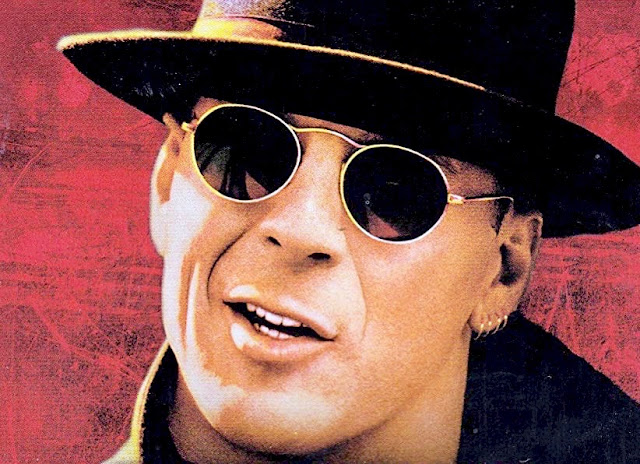 Over a caffeine infusion at Cafe de Paris Dalkin reads the International Herald Tribune, whose front page includes a story on the arrest of alleged CIA traitor Ralph Serafina's.  Then Dalkin descends the back-end marble staircase to a public telephone.

"I need to speak with Michael Zudex," says Dalkin.

"Tell him I have a message from Ralph Serafina."

Dalkin waits.  The next thing he hears is a gruff male voice—a voice demanding the caller’s name.

"Meet me in ten minutes."

"Sure am.  The Columbus Hotel lobby."

Dalkin is already seated when Michael Zudex strides in, not knowing who or what to expect, with Baldy nearby along with his usual security contingent.

Zudex focuses his cold, widening eyes—and marches over. “Are you…”

"Bruce—willie-wankstain—Willis?  No.  Sit down.”  Dalkin pats a chair beside him.  Baldy appears from behind and aims himself for a chair. “Not him,” adds Dalkin.

Zudex utters a sharp command and Baldy leaves the lobby to stand guard nearby.

Dalkin taps his Herald Trib.  "It's pretty clear.  For once the newspapers–nabobs of negativism, Spiro-fucking-Agnew—they got it right.  Ralphy got arrested.  He’s looking at the electric chair.  I’m thinking he’ll cut a plea.  That's why I'm here, Mike."

Zudex isn’t sure what to say so he says nothing.

"We know everything," Dalkin continues.  "The five million you paid him, his stake in Zudex and everything he yakked about to your SVR buddies.  Oh, yeah—and how you whacked Jason Groner, that New York Times reporter?”

Zudex's pasty complexion turns a shade pastier.  "You are bluffing."

"I don’t need to bluff with a straight-flush," says Dalkin.  "The U.S. Justice Department wants to put you on trial for first-degree murder.  In fact, a grand jury in Washington issued a sealed indictment this morning and an extradition request has been drawn up, just about ready for presentation to the French—farting frogs!”

Zudex glances about in high anxiety, as if Dalkin’s Tourettic outburst is a code to signal an ambush.

"The U.S. Navy has orders to sink your yacht if to try to flee—or to shoot down your private jet if you try to get away by air."  Dalkin pauses.  "There's only one-way outta this soup, Igor."

Zudex finally breaks a vacuum of silence.  "What way out?"

"The United States government—golly-glomping goo-goo butts.  It's double-agent time.  You know the drill."

"No time."  Dalkin shakes his head.  "It's a spot decision.  I've got two people called legas at the embassy in Paris waiting on my call.  If they don't from me in..." Dalkin checks his wristwatch "...forty-three minutes, they'll present their indictment to the French."

Zudex reaches into his jacket.

Dalkin's instinct is to duck, but he doesn’t even flinch as Zudex's hand remerges with a Hungarian passport.

"I will not travel to America," says Zudex defiantly.

In fact, Zudex is perspiring like wild pig on a spit.

"You can excuse him."  Dalkin gestures a wank in Baldy's direction.  "Call your office, tell them you're going on a quick business trip to London."  Dalkin again consults his watch.  "You and I are catching the evening flight."

"Decision time."  Dalkin reclines.  "I'm relaxed whichever way you go with this.  Flip a coin if you want."

A pair of Justice Department attorneys arrives for an 8 a.m. conference at D.C. Superior Court.

The clerk offers them coffee, which both decline, before announcing their arrival and escorting them into Judge Rudolph's chambers.

The judge had no advance knowledge of what they wanted; only that they needed to address an issue of national security that somehow involved his court.

And so now Judge Rudolph peers over paperwork piled like a mountain range across his large desk.  "Please sit down, counselors."  He finishes scribbling an opinion then eyeballs the male and female government lawyers over reading glasses that droop down his nose.  "What may I do for you?"

Carla Maybury speaks first.  "Your Honor, you have a case in your docket, Rhoda Rigglesworth versus Ding-a-Ling Widgets and Jeff Dalkin."

A bemused Judge Rudolph removes his spectacles and rubs his eyes.  "I should have known," he mutters.  "Yes.  You see all this?"  He makes a sweeping gesture across the mountain range.  "You've come to the right place.  But pray tell me why?"

"We don't represent any of the parties," says Maybury.  "We're here on behalf of the FBI."

"Jeff Dalkin was once employed as a special agent by the FBI," says Joe Fulbright, the second attorney.  "And Dalkin is currently engaged in an extremely complicated counterintelligence operation for the Bureau."

Judge Rudolph shakes his head.  "I've got two sides, each one trying to show how much of a nuisance it can be to the other, filing multiple motions on top of motions... go on."

Your court," Maybury takes over, "compelled Dalkin to answer questions in deposition pertaining to current employment.  We would prefer that he not have to divulge his current association with us."

"You are concerned that this connection will embarrass the FBI?"

"No, your Honor," says Fulbright.  "We're concerned that the plaintiff’s side will leak this, his cover will be blown and that, as a result, lives will be put in harm’s way."

"Have you taken this up with opposing counsel?" ask Rudolph.

"No, your Honor.  The plaintiff is a writer.  We believe that she will ultimately write a book about her experience with Ding-a-Ling Widgets.  Obviously, we do not want Dalkin's activities for the Bureau exposed in a book."

"Obviously," says Rudolph.  He considers this.  "Counselors, you're not asking me to recuse Mister Dalkin as a defendant to this action, are you?"

"No, your Honor," says Maybury.  "We're requesting that you rule to quash depositional testimony given by Dalkin on his current employment status."

Judge Rudolph reclines in his leather swivel chair.  "The plaintiff is looking for millions of dollars in punitive damages.  As such, her attorneys are permitted to ask Mister Dalkin about his assets and earnings.  However, if you are willing to commit to me that Mister Dalkin's earnings from the FBI will be subject to garnishment if damages are awarded to the plaintiff, I will excuse him from this line of questioning."

Posted by Robert Eringer at 7:55 AM