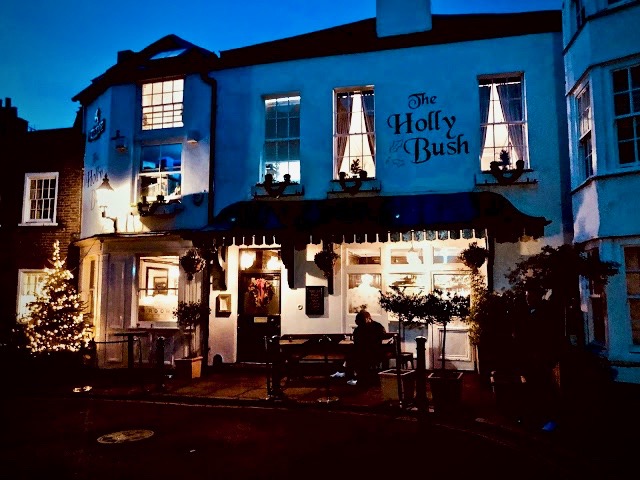 At six p.m. Jeff Dalkin is enjoying a glass of white wine at the small bar inside Lowndes' brasserie, a big bag of cash at his side.

"Tired—and me too.  But I need more time with him.  He's holding back a few things."

Thornington checks his wristwatch.  "We'd better shove off.  We have farther to go than usual."

The traffic heading north out of central London is thick and it takes nearly forty minutes for their taxi to reach Hampstead High Street.  Thornington leads Dalkin on a short walk along Heath street, up some stairs through an alley to the Holly Bush pub.

Igor Sokolov is waiting at the bar.  His eyes immediately focus upon Dalkin's bag, a twinkle that matches his smile.  "May I see?" he asks.

Sokolov peeks inside to inspect his retirement.

"You can finally spring for drinks," says Dalkin.

The publican serves a round of Famous Grouse whiskey and the three men find a cozy nook to conduct business.

Sokolov unzips a travel belt and extracts a folded piece of paper from the belt's interior.  He holds out the document while eyeing the bag at Dalkin's feet.  "I take money now?"

"Is worth double," says Sokolov.

Dalkin pushes the bag with his foot so that it touches the Russian's black sneaker.  Then he opens the page, which is typed and single-spaced.  He holds the paper before Thornington's eyes.  "You heard of this guy?"

Colin Smythson was born on November 5, 1968 in Bristol, GB, of British parents.  His mother father and mother were teachers at comprehensive school.  He is married to Margaret Atwood, and they have two children, Crispin and Alison.

His education includes a degree from Bristol University in economics, and his leisure interests include tennis and jogging.

Smythson first came to the attention of the Soviet intelligence community in 1988 while serving as a signals officer with the British Army in Germany.

In December of that year, an officer of the 1st section 2nd division of the KGB named Lieutenant Vorontzov opened an operational file on Smythson under the cryptonym "Cockles".

Thornington looks at the Russian.  "Cockles?"

By April 1989, Lt. Vorontzov had succeeded in establishing personal contact with Smythson, and the KGB recruited him as an active KGB agent.  In the recruitment document which bears Smythson's signature, he promised "to devote his life to the cause of Communism, to defend the camp of Socialism from internal and external enemies."

From 1989-90, prior to his return to GB, Smythson provided the local KGB with more than 20 reports, primarily on signals intelligence and cryptography.

Following his discharge from the British Army, Smythson was encouraged by Vorontzov to join MI5.  Smythson was given special help.  He was hired by MI5 and, by 2005, he was assigned to Division F, which monitors Soviet activities in GB.  In 2008, he became chief of Division F.

This recruitment was considered so important that Vorontzov was posted to the Soviet Embassy in London to personally handle Smythson in the mid-2000s.

On Chekhist Day (December 19th), 2014, Smythson was awarded the Russian order, "For Service to the Motherland, Third Class," by KGB's successor, the SVR.

Vorontzov, now chief of S Directorate ("illegals") continues to oversee Smythson from Moscow.  "Cockles" was upgraded to "special non-official contact" and is handled in London by a deep-cover "illegal."

An account has been established for Smythson at Volksbank in Zurich, Bahnhofstrasse branch, account no. 78563.  It has accrued in excess $4 million US.

Sokolov drains his whisky and reaches for the moneybag.

Dalkin places his foot on it.  "Something's missing, Igor.  Who is the Russian illegal and how does he communicate with Cockles?"

Sokolov shakes his head.  "Not in file.  It is local secret not for headquarters."

"But you're local.  You must know something."

Sokolov’s lips do not part.

"C'mon, Igor.  Give me something I can work with.  The SVR must have an emergency code, say, if an agent is in imminent danger of exposure."

The Russian nods.  "We have this.  For twenty thousand..."

The two men eyeball each other.

"Bonus," said Dalkin.  "Unless you're stiffing us here."

"Bonus.  Because I am nice guy."  Sokolov hunches forward so both men can smell his breath, which is not terribly pleasant.  "We have special code for danger.  A call by telephone, to home phone at night, two minutes past hour."

"Handler will say, 'Is Nigel Blunkett?  No?  Wrong number.'  It means, ten next morning, emergency meeting."

Sokolov shrugged.  "Is different every agent.  Only handler and agent know location."

Dalkin considers this, knows it must be true and discerns he can take the Russian no further.

Sokolov launches himself out of the pub.

"What now?" asks Thornington, thoroughly blown away by what he'd just learned.

"First thing, another round of whiskey," says Dalkin.  "That'll help us figure out what the next thing is."

Once the second thing gets figured, Dalkin and Thornington taxi back to The Lowndes and find Michael Zudex so morose he is almost catatonic.

"Tell you what I'm going to do," Dalkin tells the despondent Zudex.  "This debriefing could easily go on a whole week.  And I fully appreciate you've got a business to run.  So, if you’re willing to help me out with one little thing, I'll release you of all further duty."

Dalkin nods.  "It'll be as if we never met. With this caveat. They’ll still be watching you. Make a wrong move from this point on and they’ll track you down, just like they did to Milosevic and Bin Laden.”

Posted by Robert Eringer at 7:52 AM