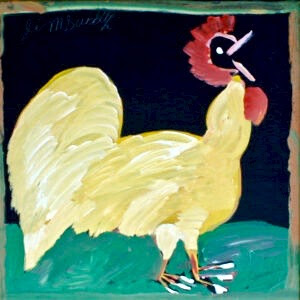 Inside his junior suite, Jeff Dalkin hands the landline phone to Michel Zudex and taps out a number.

A few minutes earlier, Thornington had managed to sweet-talk a night duty-officer at MI5 into providing Colin Smythson's home number.

"I'm sorry, I think you have a wrong number..." and then muffled voices.

And then a male comes on the line.  "This is Smythson."

The tension in Smythson’s voice suggests that he had already noted the time:  precisely two minutes past the hour.

"Is this Nigel Blunkett?" says Zudex.

"No," replies Smythson.  "You must have a wrong number."

Dalkin, Thornington, Zudex and their driver huddle in a Volkswagen Passat on Thorney Street, around the corner from MI5 headquarters at Millbank.

The gamble is this:

Would Colin Smythson go to work before his ten o'clock rendezvous.  Or would he call in sick and go straight there—wherever there was—from his home?

As Thornington recalled, his boss usually arrived for work early, before anyone else.  He and others had put this down to Smythson's truckling ambition to ascend swiftly within the service.

At just past 7:15, a tall man wearing a Burberry raincoat is striding briskly up Millbank toward MI5 headquarters.

One hour and forty-five minutes later, Colin Smythson reappears on MI5's doorstep and looks up and down Millbank before turning toward Lambeth Bridge.

Dalkin alights from the front seat; the others remain in the vehicle.

Dalkin barely keeps up on foot, almost losing his prey in the sea of people coming and going through the busy Underground part of the station.

Smythson boards a subway train; Dalkin steps into the car behind, keeping an eye on the traitor through grimy windows of connecting doors.

At Green Park, the Englishman alights and ascends to the street and hails a taxi.

Fortunately for Dalkin, taxis are in abundance on Piccadilly and he snags his own within seconds.

"I hate clichés," Dalkin squawks.  "But would you follow that cab in front of us."

Dalkin smirks as he consults his cell phone and connects to Thornington.  "We're on Piccadilly, headed... where we headed?" he asks the cabbie.

Smythson's taxi circles the Wellington Monument and rockets up Park lane, around Marble Arch, down Oxford Street, on which only buses and taxis are permitted.  Shrewd, thought Dalkin—anyone trying to follow in a private car would be pulled over by traffic cops.

"Go past them," snaps Dalkin.  "Find another street to pull into.  Where are we?"

Dalkin jumps out, hoofs back to where Smythson had gotten out and looks around.

"Are you near the high street?" Thornington remains calm.

"Shops and pubs," replied the Brit.

"It'll be chock-a-block with coffee bars and pubs," says Thornington.  "It's five to ten.  This must be it."

"Stand by."  Dalkin launches himself past a corner restaurant called and peeks inside. "I got him.”

Dalkin backs up.  “A café or deli called Carluccio’s.  I’m going in.”

Bingo.  Smythson is sitting sat in a far corner in back.  He looks up at Dalkin blankly before returning to The Times crossword puzzle while a waitress serves him cappuccino.

Dalkin sits at the front, pretends to look at a menu while sending a text message to Thornington:  Carluccio’s confirmed, back table.

Across the room, Smythson consults his wristwatch.

Another five minutes pass.  Smythson checks the time again, drains his cup and taps his foot.

Dalkin phones Thornington.  "Where are you?" he hisses.

A minute later, Michael Zudex enters Carluccio’s, looks around, trains his eyes on Colin Smythson and strolls over to the Englishman.

Smythson looks up over his paper.

"Who are you?" Smythson demands.

Smythson blinks.  "Do sit down."

Zudex sits.  "You are in danger," he whispers.

Smythson swallows hard, his Adam’s apple bobbing up and down his neck.  "How so?"

"The British know that you spy for Russia," says Zudex.  "We must take you from Britain—or you will be arrested."

"How much time do I have?" Smythson barely whispers.

"Where are we going?"

"Poole Harbor, across channel to France.  We drive to Moscow."

"But I need my passport."

"Not necessary," says Zudex.  "I have foreign passport, your photograph, new name."

"But my family..." says Smythson, a pained a expression on his face.

"No time," says Zudex.  "They join you later.  We give you one million-dollar bonus," adds Zudex.  "For your service. And nice dacha.  Come, we go."

Smythson stands, heart racing as he follows Zudex through Carluccio’s.

The moment Smythson walks out into the sunlight, a series of camera flashes blind him.

It takes a good ten seconds for Smythson’s sight to adjust. And when it does, his eyes settle upon his old nemesis, Richard Thornington, standing directly in front of him.

"Good God!" Smythson blurts, white as a spook on Halloween.

"Have you met my brother?"  Thornington motions at the photographer.  "He works for The Sunday Times."

Shell-shocked, Smythson turns to face Thomas Thornington, an investigative reporter.  “Good God,” he utters before turning to face Zudex, who is handing Jeff Dalkin a digital recorder memorializing his exchange with Smythson inside Carluccio’s.

"I ought to kick your arse," Richard Thornington adds, regaining Smythson's attention, "but I expect the inmates at Bellmarsh will have better uses for it."  He chortles.  "Especially when they hear your codename."

"Mister Smythson," says Thomas the reporter.  "Would it be presumptuous of me to offer you a ride to Scotland Yard?"

Smythson assesses his odds of being able to flee on foot.

They aren’t good as two cars of plain-clothed Special Branch officers race up alongside.

(Inside, a gossip columnist reports that movie actor Bruce Willis may have played a role in their scoop.)

Colin Smythson is, by this time, telling all to de-briefers in exchange for unspecified and unlikely leniency.

Back in Monaco, Michael Zudex has happily returned to luxury living... until he is seized by clinical shock after discovering his name amongst The Sunday Times’ revelations.

Igor Sokolov, assessing the situation, welcomes Zudex as a red herring.  Although not thrilled that data from his file found its way to the media, the Russian can at least rest assured that blame from SVR spymasters will be diverted elsewhere.

Colin Smythson was convicted of treason and sentenced to 20 years' confinement at H.M. Bellmarsh Prison.

It is in maximum security that Cockles found his bosom buddies, Mussels and Winkles.

Or they found him.

Michael Zudex tried to flee on his yacht.

He believed he was one step ahead of everyone... until Baldy, on orders from Moscow, put Zudex to bed.

A seabed, where he would rest eternally with New York Times reporter Jason Groner and two Ukrainians.

He could have retired to the Black Sea with his share of booty, but the Russian remained in Britain to launch his own tour-guide service, which he called A Spy's London.

Posted by Robert Eringer at 8:19 AM