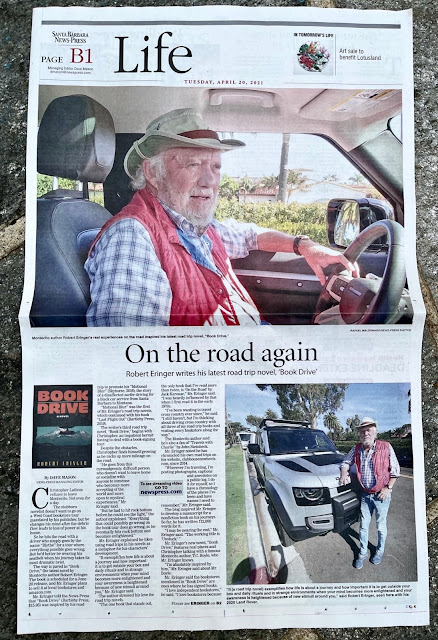 On the road again

Christopher Lathom refuses to leave Montecito. Not even for a day.

The stubborn novelist doesn’t want to go on a West Coast bookstore tour mandated by his publisher, but he changes his mind after the debris flow leads to loss of power at his home.

So he hits the road with a driver who simply goes by the name “Blythe” for a tour where everything possible goes wrong. But he’d better be wearing his seatbelt when his journey takes its most dramatic twist.

The way is paved in “Book Drive,” the latest novel by Montecito author Robert Eringer. The book is scheduled for a June 20 release, and Mr. Eringer plans to sell it at local bookstores and amazon.com.

Mr. Eringer told the News-Press that “Book Drive” (Bartleby Press, $15.95) was inspired by his road trip to promote his “Motional Blur” (Skyhorse, 2016), the story of a disaffected surfer driving for a black car service from Santa Barbara to Montana.

“Motional Blur” was the first of Mr. Eringer’s road trip novels, which continued with his book “Last Flight Out” (Bartleby Press, 2019).

The writer’s third road trip novel, “Book Drive,” begins with Christopher, an impatient hermit having to deal with a book-signing tour.

Despite the obstacles, Christopher finds himself growing as he racks up more mileage on the road.

“He goes from this curmudgeonly, difficult person who doesn’t want to leave home or socialize with anyone to someone who becomes more accepting of the world and more open to mystical experiences,” Mr. Eringer said.

“But he had to hit rock bottom before he could see the light,” the author explained. “Everything that could possibly go wrong on the book tour does go wrong, so he eventually hits rock bottom and becomes enlightened.”

Mr. Eringer explained he likes using road trips in his novels as a metaphor for his characters’ development.

“It exemplifies how life is about a journey and how important it is to get outside your box and daily rituals and in strange environments when your mind becomes more enlightened and your awareness is heightened because of new stimuli around you,” Mr. Eringer said.

The author stressed his love for road trip novels.

“The one book that stands out, the only book that I’ve read more than twice, is ‘On the Road’ by Jack Kerouac,” Mr. Eringer said. “I was heavily influenced by that when I first read it in the early 1970s.

“I’ve been wanting to travel cross country ever since,” he said. “I still haven’t, but I’m thinking about driving cross country with all three of my road trip books and visiting every bookstore along the way.”

The Montecito author said he’s also a fan of “Travels with Charlie” by John Steinbeck.

Mr. Eringer noted he has chronicled his own road trips on his website, clubhouseonwheels.com, since 2014.

“Wherever I’m traveling, I’m posting photographs, captions and anecdotes on a public log. I do it for myself, so I have a chronology of the places I’ve been and have names I need to remember,” Mr. Eringer said.

The blog inspired Mr. Eringer to develop a manuscript for a nonfiction book on his journeys. So far, he has written 112,000 words for it.

“I may be nearing the end,” Mr. Eringer said. “The working title is ‘Unstuck.’ ”

Mr. Eringer said the bookstores mentioned in “Book Drive” are ones where he has signed books.

“I love independent bookstores,” he said. “I love bookstores because you never know what you’re going to find. Browsing for me is a big joy.”

What does he enjoy the most about book tours?

“The food and wine,” Mr. Eringer said, not missing a beat.

Mr. Eringer, a Los Angeles native who grew up in West Hollywood, Beverly Hills and London, started his writing career as a reporter. After attending American University in Washington, D.C., he went into the world of newspapers with a reporting job at The American, a London paper, in 1977-78.

His investigative reporting career began with an investigation he did for The Sunday People, a large-circulation newspaper based in London.

“I infiltrated the Ku Klux Klan,” Mr. Eringer said. His undercover work, in which he went to Spartanburg, S.C., and became a KKK officer, led to a 1980 expose that thwarted the KKK’s efforts to start a branch in London.

Mr. Eringer went on to a long career in investigative journalism.

“I always had a good feeling when I was exposing the bad guys,” said Mr. Eringer, whose column, “The Investigator,” ran from 2008 to 2010 in the News-Press.

His nonfiction books have included “Ruse” (Potomac Books, 2008), which was about his exploits working undercover for FBI counterintelligence.

When his journalism career began in the late 1970s and early 1980s,  Mr. Eringer enjoyed the research and investigation more than the writing.

“Over time, just by the sheer practice of writing, I became a) able to enjoy it and b) got better at it,” Mr. Eringer said. “By the mid-1990s, I didn’t think I was ready to write a novel, but I wrote a 20-page movie treatment.”

“It was about a coup d’etat in the Principality of Monaco. It was a comedy, a farce actually,” Mr. Eringer said. “After that, I realized I could do that and continued to write novels.”

Mr. Eringer moved to Montecito in 2001 from Washington, D.C. He and his wife, Elizabeth, have been married for 41 years and have two adult daughters and two grandsons.

“I really believe that the last three books are the best novels I’ve ever written,” he said, referring to his road trip books,  “It took me a long time to get there.”