SANTA BARBARA NEWS-PRESS: THE INVESTIGATOR: ALL IN THE FAMILY 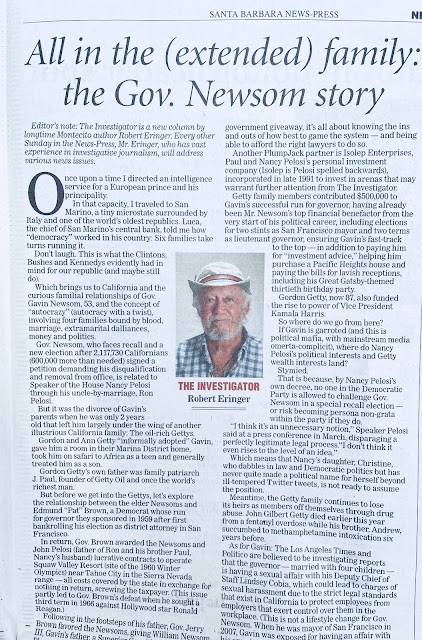 Editor’s note: The Investigator is a new column by longtime Montecito author Robert Eringer. Every other Sunday in the News-Press, Mr. Eringer, who has vast experience in investigative journalism, will address various news issues.

Once upon a time I directed an intelligence service for a European prince and his principality.

In that capacity, I traveled to San Marino, a tiny microstate surrounded by Italy and one of the world’s oldest republics. Luca, the chief of San Marino’s central bank, told me how “democracy” worked in his country: Six families take turns running it.

Don’t laugh. This is what the Clintons, Bushes and Kennedys evidently had in mind for our republic (and maybe still do).

Which brings us to California and the curious familial relationships of Gov. Gavin Newsom, 53, and the concept of “autocrazy” (autocracy with a twist), involving four families bound by blood, marriage, extramarital dalliances, money and politics.

Gov. Newsom, who faces recall and a new election after 2,117,730 Californians (600,000 more than needed) signed a petition demanding his disqualification and removal from office, is related to Speaker of the House Nancy Pelosi through his uncle-by-marriage, Ron Pelosi.

But it was the divorce of Gavin’s parents when he was only 2 years old that left him largely under the wing of another illustrious California family: The oil-rich Gettys.

Gordon and Ann Getty “informally adopted” Gavin, gave him a room in their Marina District home, took him on safari to Africa as a teen and generally treated him as a son.

Gordon Getty’s own father was family patriarch J. Paul, founder of Getty Oil and once the world’s richest man.

But before we get into the Gettys, let’s explore the relationship between the elder Newsoms and Edmund “Pat” Brown, a Democrat whose run for governor they sponsored in 1959 after first bankrolling his election as district attorney in San Francisco.

In return, Gov. Brown awarded the Newsoms and John Pelosi (father of Ron and his brother Paul, Nancy’s husband) lucrative contracts to operate Squaw Valley Resort (site of the 1960 Winter Olympics) near Tahoe City in the Sierra Nevada range — all costs covered by the state in exchange for nothing in return, screwing the taxpayer. (This issue partly led to Gov. Brown’s defeat when he sought a third term in 1966 against Hollywood star Ronald Reagan.)

Following in the footsteps of his father, Gov. Jerry Brown favored the Newsoms, giving William Newsom III, Gavin’s father, a Superior Court judgeship in Placer County and, three years later, a seat on the state Court of Appeal in San Francisco.

In a column two years ago, Ken Herron wrote: “The four families of Pat Brown, William Newsom, John Pelosi and J. Paul Getty have dominated California politics for over 60 years.”

Now back to the Gettys.

Before becoming a judge, William Newsom III had been J. Paul Getty’s attorney. While a judge he ruled on legal issues favoring the financial situation of J. Paul’s heir, Gordon Getty. Then after retiring from the bench, Mr. Newsom became administrator of the Gordon P. Getty Family Trust, which had benefited from his judgments.  (It was Gavin’s dad, when John Paul Getty III, J. Paul’s grandson, was kidnapped, in 1973, who couriered to Italy the ransom of $2.7 million in cash to buy his freedom.)

William, who passed away in 2018, made no bones about it, famously saying, “I make my money working for Gordon Getty.” (By 1983 Gordon was declared — by Forbes magazine — the world’s richest man with a fortune of $2 billion.)

When young Gavin, now the guv, started his PlumpJack Group wine and hospitality businesses in June 1991 with one of Gordon’s sons, Billy Getty, it was Gordon (who’d attended St. Ignatius College Preparatory with Gavin’s father, William) who supplied the big bucks and even gave the business its name after an opera he had written.

An aside here: PlumpJack received $2.9 million in federal funding through the Paycheck Protection Program stemming from the COVID-19 pandemic and lockdown while hundreds of other small business owners struggled in vain for such assistance. Almost three million dollars for only 14 employees.

And while the governor has placed his ownership in a blind trust, he continues to receive hundreds of thousands of dollars in gross income each year from the company. Dare I say, whenever there’s a government giveaway, it’s all about knowing the ins and outs of how best to game the system — and being able to afford the right lawyers to do so.

Another PlumpJack partner is Isolep Enterprises, Paul and Nancy Pelosi’s personal investment company (Isolep is Pelosi spelled backwards), incorporated in late 1991 to invest in arenas that may warrant further attention from The Investigator.

Getty family members contributed $500,000 to Gavin’s successful run for governor, having already been Mr. Newsom’s top financial benefactor from the very start of his political career, including elections for two stints as San Francisco mayor and two terms as lieutenant governor, ensuring Gavin’s fast-track to the top — in addition to paying him for “investment advice,” helping him purchase a Pacific Heights house and paying the bills for lavish receptions, including his Great Gatsby-themed thirtieth birthday party.

So where do we go from here?

If Gavin is garroted (and this is political mafia, with mainstream media omerta–complicit), where do Nancy Pelosi’s political interests and Getty wealth interests land?

That is because, by Nancy Pelosi’s own decree, no one in the Democratic Party is allowed to challenge Gov. Newsom in a special recall election — or risk becoming persona non-grata within the party if they do.

“I think it’s an unnecessary notion,” Speaker Pelosi said at a press conference in March, disparaging a perfectly legitimate legal process.“I don’t think it even rises to the level of an idea.”

Which means that Nancy’s daughter, Christine, who dabbles in law and Democratic politics but has never quite made a political name for herself beyond ill-tempered Twitter tweets, is not ready to assume the position.

Meantime, the Getty family continues to lose its heirs as members off themselves through drug abuse. John Gilbert Getty died earlier this year from a fentanyl overdose while his brother, Andrew, succumbed to methamphetamine intoxication six years before.

As for Gavin: The Los Angeles Times and Politico are believed to be investigating reports that the governor — married with four children — is having a sexual affair with his Deputy Chief of Staff Lindsey Cobia, which could lead to charges of sexual harassment due to the strict legal standards that exist in California to protect employees from employers that exert control over them in the workplace. (This is not a lifestyle change for Gov. Newsom. When he was mayor of San Francisco in 2007, Gavin was exposed for having an affair with his appointments secretary, Ruby Rippey-Tourk, the wife of his close friend and campaign manager Alex Tourk. At the time, Mayor Newsom blamed his poor judgment on excessive use of alcohol and said he would seek help, but never did.)

According to the San Joaquin Valley Sun, “Gov. Gavin Newsom was engaged in multiple alleged extramarital affairs over the course of 2020, a time where many of his orders shuttered nearly all personal and economic activity across the nation’s largest state.”

(The governor’s mask-less appearance at the ultra-expensive French Laundry restaurant after ordering everyone else in California to remain cloistered at home may be the scantiest garment of his own dirty laundry.)

Thus far, mainstream media has been shielding the governor from these salacious reports.

It is well known that Gordon, a reputed philanderer, kept a second family in Los Angeles with three daughters. It is less known, if believed in certain quarters, that Gordon is actually Gavin’s biological father. Despite questions posed to all parties concerned, there has never been a denial to the contrary.

All of this sounds awfully like the general disarray in which the union’s most populous state finds itself amid the highest COVID casualty rate in the country, lack of adequate vaccine supply, chronic homelessness, a troublesome electrical grid, drought, the highest state tax rate in the nation (13.3%) and government spending like there’s no tomorrow (which there won’t be for your grandkids when they’re enslaved with massive debt and higher taxes).

The industry that thrives best in California these days is the cultivation and sales of cannabis, leaving one to wonder if a haze of idiocracy has settled upon the Golden State.

Because one thing is for sure: The “six families” who take turns running “democracy” in San Marino do a much finer job of governance than the inept political “leaders” of California.

If you have a story idea for The Investigator, contact Robert Eringer at reringer@gmail.com.