A Manifance Quest is about destiny, given some chance; or chance, given some destiny; about transcending the boundaries of one’s comfort zone and traveling through a magic portal into a world of wonderment and heightened awareness.

When you allow chance to guide your travel choices you become a lightning rod for messages from the universe.

As never before, all cluttered thoughts of past and future disappear; body and soul, invigorated by motion and a knowing that wherever you happen to find yourself through the flip of a coin is precisely where you’re meant to be:  a mani-festival into which you have manifested yourself; a time and space called Manifance (manifesting chance) in which only the present moment matters.

This idea began with my purchase, a few years ago, of an ancient Greek Corinthian Stater from a small shop called Magenta in Cottonwood, Arizona.

This coin had been traveling approximately 2,350 years to reach me.

Maybe Jesus himself handled it.

Maybe Ceasar, who was known to toss a coin to decide difficult issues, flipped it to decide on something.

"It was Julius Caesar who instituted the heads/tails coin flipping practice. Caesar's own head appeared on one side of every Roman coin, and consequently it was a head, especially that of Caesar, that in a coin flip determined the winner of a dispute or indicated an affirmative response from the gods."The reverence for Caesar was such, that serious litigation, involving property, marriage or criminal guilt, was often settled by the flip of a coin. Caesar's head hanging upright meant that the emperor, in absentia, agreed with a particular decision and opposed the alternative."

The historical origin of coin-flipping dates back to the Romans, 7th century B.C. and the Greeks, 600-527 B.C.
The Romans called it Navia aut caput (Ship or Head).
The Greeks called it Night and Day.
Both interpreted coin-flipping as a chance outcome that expressed divine will.
From... 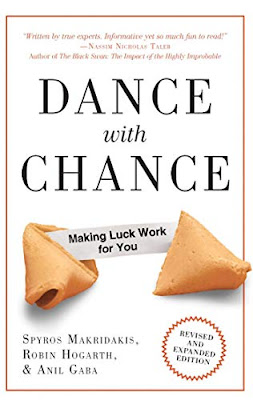 "Giving up the illusion of control actually increases control and results in substantial benefits."

Posted by Robert Eringer at 7:45 AM