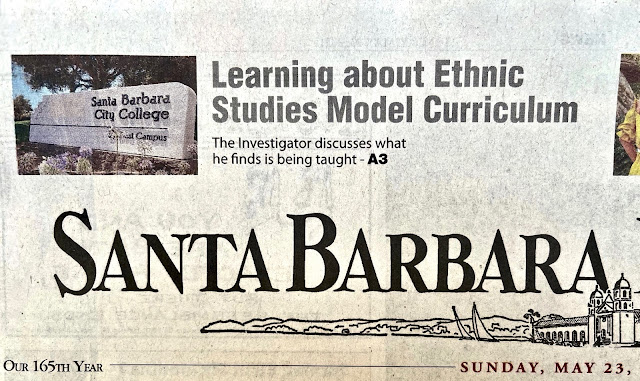 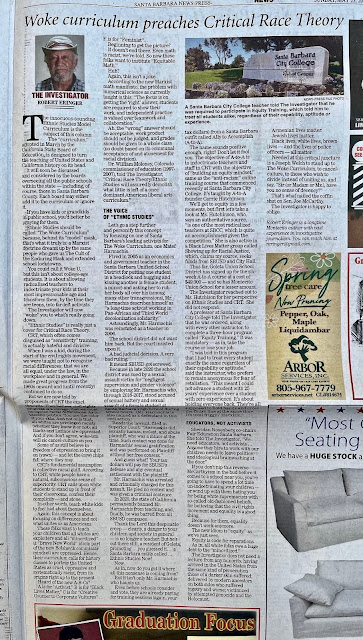 The innocuous-sounding Ethnic Studies Model Curriculum is the subject of this column.

The “curriculum,” adopted in March by the California State Board of Education, is designed to turn the teaching of United States and California history on its head.

It will soon be discussed and considered by the boards overseeing all the public schools within the state — including, of course, those in Santa Barbara County. Each board may either add it to the curriculum or ignore it.

If you have kids or grandkids in public school, you’d better be praying for the latter.

Ethnic Studies should be called “The Woke Curriculum” because, behind its “model” mask, that’s what it truly is: a Marxist doctrine dreamt up by the same people who gave us The Cult of the Enduring Mask and extended school lockdowns.

You could call it Woke U, but this isn’t about college-age students. It is about allowing radicalized teachers to indoctrinate your kids at their most impressionable age and transform them, by the time they are teens, into far-left activists.

The Investigator will now woke you to what’s really going down.

CRT, which often comes disguised as “sensitivity” training, is actually hateful and divisive.

When I was a kid, during the start of the civil rights movement, we were taught not to recognize racial differences; that we are all equal, under the law, in the workplace and in general. We made great progress from the 1960s onward and (until recently) continued to do so.

But we are now told by proponents of CRT the exact opposite. They believe civil rights progress is a mirage, that we must recognize racial differences. As in identity politics. You are the color of your skin. And not only that, all whites are privileged racists (whether they know it or not); all blacks and Latinos are oppressed. And if you don’t agree, woke-ism will sic cancel culture on you.

Some of us still believe in freedom of expression so bring it on (yawn) — and let the (cow) chips fall where they may.

CRT’s fundamental assumption is collective racial guilt. According to CRT, white people have a natural, subconscious sense of superiority. CRT calls upon white students to stand up in front of their classrooms, confess their complicity — and atone.

In other words, teach white kids to feel bad about themselves.

Again, this concept is about focusing on differences and not what unites us as Americans.

These folks want to teach your children that all whites are exploiters and all “minoritized” (a “Brave New World” idiom part of the new Bolshevik commissar mindset) are oppressed. Hence, their curriculum calls for history classes to portray the United States as cruel, oppressive and systematically racist, from its origins right up to the present.

Heard of the new A-B-Cs?

A is for “Activist,” B is for “Black Lives Matter,” C is for “Creative Counter to Corporate Vultures” …  F is for “Feminist ”…

Beginning to get the picture?

It doesn’t end there. Even math is racist, we’re told. So now these folks want to institute “Equitable Math.”

Again, this isn’t a joke.

According to the new Marxist math manifesto, the problem with numerical science as currently taught is this: “The focus is on getting the ‘right’ answer, students are required to show their work and independent practice is valued over teamwork and collaboration.”

Ah, the “wrong” answer should be acceptable, work product should not be judged, and grades should be given to a whole class (no doubt based on its communal acceptance of and atonement for racial division).

THE VOICE OF “ETHNIC STUDIES”

Let’s go a step further and personify this concept by focusing on one of Santa Barbara’s leading activists for The Woke Curriculum, one Matef Harmachis.

Fired in 2005 as an economics and government teacher in the Santa Barbara Unified School District for putting one student in a headlock and hugging and kissing another (a female student, a minor) and asking her to rub her body all over his (among many other transgressions), Mr. Harmachis describes himself as “a long-time activist working in Pan-African and Third World decolonization solidarity.”

Astoundingly, Mr. Harmachis was reinstated as a teacher in 2006.

The school district did not want him back. But the court insisted upon it.

It meant SBUSD got screwed.

Because in late 2020 the school district was sued by a sexual assault victim for “negligent supervision and gender violence” by employing Mr. Harmachis who, through 2016-2017, stands accused of sexual battery and sexual assault of a female student at Santa Barbara High School during school hours.  (Mr. Harmachis is also named as a defendant in this civil action.)

Reads the lawsuit, filed in Superior Court: “Harmachis did sexually harass, molest, and abuse plaintiff, who was a minor at the time. Such contact was done for Harmachis’ sexual gratification and was performed on Plaintiff without her free consent.”

And guess what? Your tax dollars will pay for SBUSD’s defense and any eventual settlement with the plaintiff.

Mr. Harmachis was arrested and criminally charged for this assault. He pled no contest and was given a criminal sentence.

In 2020, the state of California permanently banned Mr. Harmachis from teaching, and, finally, he is barred from all SBUSD campuses.

Thank the Lord this despicable creep — clearly, a danger to your children and society in general — is no longer a teacher. But he’s out there still, a resident of Goleta, promoting … you guessed it…  a Santa Barbara entity called… Ethnic Studies Now!

As in, now do you get it where all this nonsense is coming from?

But it isn’t only Mr. Harmachis who haunts us.

Even before schools consider and vote, they are already paying for training sessions (again, your tax dollars) from a Santa Barbara outfit called Ally to Accomplish (A-to-A). The name sounds positive enough, right? Don’t let it fool you. The objective of A-to-A is to indoctrinate teachers and staff in CRT with the objective of “building an equity mindset,” same as the “anti-racism” online training course that commenced last week through Santa Barbara City College taught by A-to-A founder Carrie Hutchinson.

We’ll get to equity in a few moments, but first let’s take a look at Ms. Hutchinson, who, says an authoritative source, “is one of the most radicalized teachers at SBCC, which is quite an accomplishment given the competition.” She is also active in a Black Lives Matter group called Showing up for Racial Justice, which, claims my source, seeks funds from SBUSD and City Hall.

Thus far, Goleta Union School District has signed up for the six-week A-to-A course at a cost of $49,000 — and so has Montecito Union School for a lesser amount.

The Investigator reached out to Ms. Hutchison for her perspective on Ethnic Studies and CRT.  She did not respond.

A professor at Santa Barbara City College told The Investigator that he was ordered, along with every other instructor, to complete a three-hour program called “Equity Training.” It was mandatory — as in, take the course or lose your job.

“I was told in this program that I had to treat every student exactly the same regardless of their capability or aptitude,” said the instructor, who prefers to remain anonymous for fear of retaliation. “This meant I could not advance a student with 25 years’ experience over a student with zero experience. It’s about holding everyone back. They’re all supposed to hold hands and cross the finish line at the same time. It’s total friggin’ Marxism.”

Sheridan Rosenberg co-chairs Fair Education Santa Barbara. She told The Investigator, “We need educators, not activists … Anyone they hire to work with our children needs to leave politics and ideological brainwashing at the door.”

If you don’t nip this reverse McCarthyism in the bud before it comes to a school near you, you’re going to have to spend a lot time un-indoctrinating your children — or wind up with them hating you for being white supremacists with so-called old-fashioned beliefs, for believing that the civil rights movement and equality is a good thing.

Because for them, equality doesn’t work anymore.

The new idiom is equity, as we’ve just seen.

Equity is code for reparations.

As in, all white folks owe a huge debt to the “minoritized.”

The Investigator does not need a lecture from any minority, having arrived in the United States from the same kind of persecution those of a darker skin suffered; delivered by modern ancestors on both sides who suffered bigotry and worse; victimized by attempted genocide and the Holocaust.

Needed at this critical juncture is a Joseph Welch to stand up to The Woke Curriculum, to cancel culture, to those who wish to divide instead of uniting us, and say, “Sir (or Madam or Mx.), have you no sense of decency?”

That’s what nailed the coffin shut on Sen. Joe McCarthy.

The Investigator is happy to oblige.

Robert Eringer is a longtime Montecito author with vast experience in investigative journalism. You can reach him at reringer@gmail.com.