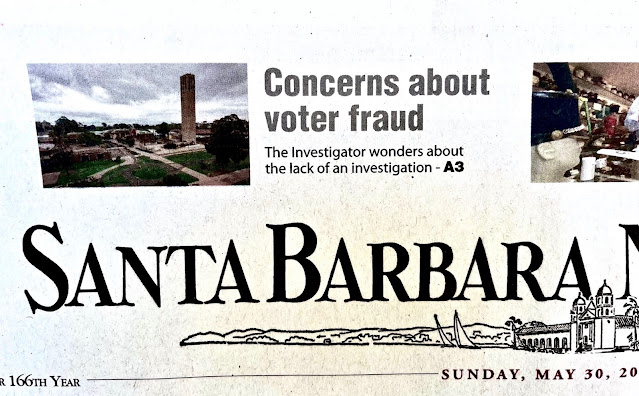 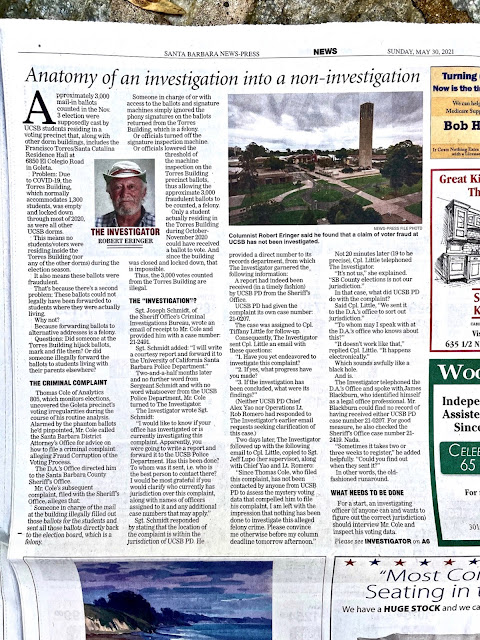 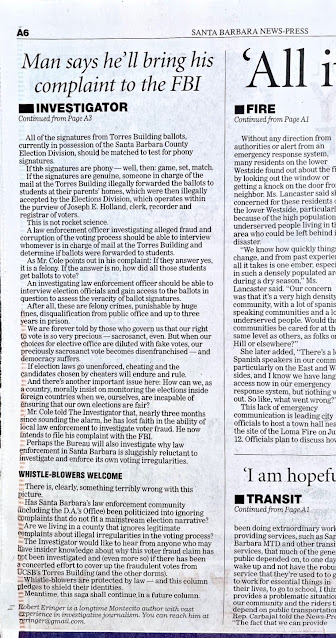 Approximately 3,000 mail-in ballots counted in the 3 November 2020 election were supposedly cast by UCSB students residing in a voting precinct that, along with other dorm buildings, includes the Francisco Torres/Santa Catalina Residence Hall at 6850 El Colegio Road in Goleta.

Problem: Due to COVID-19, the Torres Building, which normally accommodates 1,300 students, was empty and locked down through most of 2020, as were all other UCSB dorms.

This means no students/voters were residing inside the Torres Building (nor any of the other dorms) during the election season.

It also means these ballots were fraudulent.

Because there’s a second problem: These ballots could not legally have been forwarded to students where they were actually living.

Because forwarding ballots to alternative addresses is a felony.

Questions: Did someone at the Torres Building hijack ballots, mark and file them? Or did someone illegally forward the ballots to students living with their parents elsewhere?

Thomas Cole of Analytics 805, which monitors elections, uncovered the Goleta precinct’s voting irregularities during the course of his routine analysis. Alarmed by the phantom ballots he’d pinpointed, Mr. Cole called the Santa Barbara District Attorney’s Office for advice on how to file a criminal complaint alleging Fraud Corruption of the VotingProcess.

The DA’s Office directed him to the Santa Barbara Sheriff’s Office (SBSO).

a)    Someone in charge of the mail at the building illegally filled out those ballots for the students and sent all those ballots directly back to the election board, which is a felony.

b)    Someone in charge of or with access to the ballots and signature machines simply ignored the phony signatures on the ballots returned from the Torres Building, which is a felony.

Or officials turned off the signature inspection machine.

Or officials lowered the threshold of the machine inspection on the Torres Building precinct ballots, thus allowing the approximate 3,000 fraudulent ballots to be counted, a felony.

Only a student actually residing in the Torres Building during October-November 2020 could have received a ballot to vote. And since the building was closed and locked down, that is impossible. Thus, the 3,000 votes counted from the Torres Building are illegal.

Sergeant Joseph Schmidt of SBSO’s Criminal Investigations Bureau wrote an e-mail of receipt to Mr. Cole and provided him with a case number: 21-2491.

Sergeant Schmidt added: “I will write a courtesy report and forward it to the University of California Santa Barbara Police Department.”

Two-and-a-half months later and no further word from Sergeant Schmidt and with no word whatsoever from the UCSB Police Department, Mr. Cole turned to The Investigator.

I would like to know if your office has investigated or is currently investigating this complaint. Apparently, you were going to write a report and forward it to the UCSB Police Department. Has this been done? To whom was it sent i.e. who is the best person to contact there? I would be most grateful if you would clarify who currently has jurisdiction over this complaint, along with names of officers assigned to it and any additional case numbers that may apply.

Sergeant Schmidt responded by stating that the location of the complaint is within the jurisdiction of UCSB PD. He provided a direct number to their records department, from which The Investigatorgarnered the following information:

·     A report had indeed been received (in a timely fashion) by UCSB PD from SBSO.

·     The case was assigned to Corporal Tiffany Little for follow-up.

Consequently, The Investigator sent Corporal Little an e-mail with these questions:

1. Have you yet endeavored to investigate this complaint?

2. If yes, what progress have you made?

3. If the investigation has been concluded, what were its findings?

Two days later, The Investigator followed up with the following e-mail to Corporal Little, copied to Sergeant Jeff Lupo (her supervisor), along with Chief Yao and Lieutenant Romero:

Since Thomas Cole, who filed this complaint, has not been contacted by anyone from UCSB PD to assess the mystery voting data that compelled him to file his complaint, I am left with the impression that nothing has been done to investigate this alleged felony crime. Please convince me otherwise before my column deadline tomorrow afternoon.

Not twenty minutes later (nineteen to be precise), Corporal Little telephoned The Investigator.

“It’s not us,” she explained. “SB County elections is not our jurisdiction.”

In that case, what did UCSB PD do with the complaint?

Said Corporal Little, “We sent it to the DA’s office to sort out jurisdiction.”

“To whom may I speak with at the DA’s office who knows about this?”

“It doesn’t work like that,” replied Corporal Little. “It happens electronically.”

The Investigator telephoned the DA’s Office and spoke with James Blackburn, who identified himself as a Legal Office Professional.  Mr. Blackburn could find no record of having received either UCSB PD case number 21-0207. For good measure, he also checked SBSO case number 21-2419. Nada.

“Sometimes it takes two or three weeks to register,” he added helpfully. “Could you find out when they sent it?”

In other words, the old-fashioned runaround.

WHAT NEEDS TO BE DONE

For a start, an investigating officer (if anyone can and wants to figure out the correct jurisdiction) should interview Thomas Cole and inspect his voting data.

All of the signatures from Torres Building ballots, currently in possession of the Santa Barbara County Election Division, should be matched to test for phony signatures.

If the signatures are phony—well, then: game, set, match.

If the signatures are genuine, someone in charge of the mail at the Torres Building illegally forwarded the ballots to students at their parents’ homes, which were then illegally accepted by the Elections Division, which operates within the purview of Joseph E. Holland, Clerk, Recorder and Registrar of Voters.

This is not rocket science.

A law enforcement officer investigating alleged fraud corruption of the voting process should be able to interview whomever is in charge of mail at the Torres Building and determine if ballots were forwarded to students.

As Mr. Cole points out in his complaint: If they answer yes, it is a felony. If the answer is no, how did all those students get ballots to vote?

An investigating law enforcement officer should be able to interview election officials and gain access to the ballots in question to assess the veracity of ballot signatures.

After all, these are felony crimes, punishable by huge fines, disqualification from public office and up to three years in prison.

We are forever told by those who govern us that our right to vote is so very precious—sacrosanct, even. But when our choices for elective office are diluted with fake votes, our preciously sacrosanct vote becomes disenfranchised—and democracy suffers.

If election laws go unenforced, cheating and the candidates chosen by cheaters will endure and rule.

And there’s another important issue here:  How can we, as a country, morally insist on monitoring the elections inside foreign countries when we, ourselves, are incapable of ensuring that our own elections are fair?

Mr. Cole told The Investigator that, nearly three months since sounding the alarm, he has lost faith in the ability of local law enforcement to investigate voter fraud. He now intends to file his complaint with the FBI.

Perhaps the Bureau will also investigate why law enforcement in Santa Barbara is sluggishly reluctant to investigate and enforce its own voting irregularities.

There is, clearly, something terribly wrong with this picture.

Has Santa Barbara’s law enforcement community (including the DA’s Office) been politicized into ignoring complaints that do not fit a mainstream election narrative?

Are we living in a county that ignores legitimate complaints about illegal irregularities in the voting process?

The Investigator would like to hear from anyone who may have insider knowledge about why this voter fraud claim has not been investigated and (even more so) if there has been a concerted effort to cover up the fraudulent votes from UCSB’s Torres Building (and the other dorms).

Whistle-blowers are protected by law—and this column pledges to shield their identities.

Meantime, this saga shall continue in a future column.