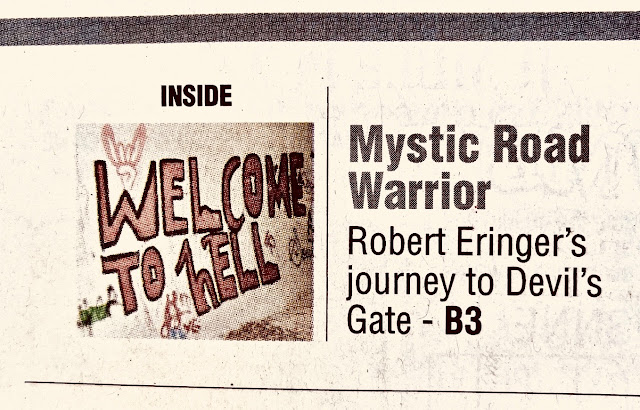 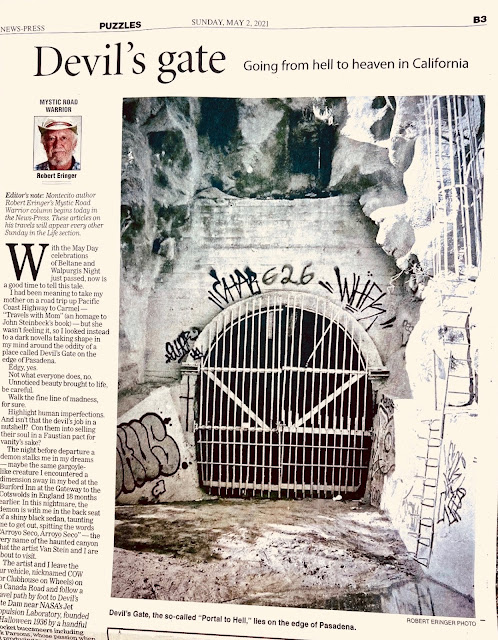 Going from hell to heaven in California

Editor’s note: Montecito author Robert Eringer’s Mystic Road Warrior column begins today in the News-Press. These articles on his travels will appear every other Sunday in the Life section.

With the May Day celebrations of Beltane and Walpurgis Night just passed, now is a good time to tell this tale.

I had been meaning to take my mother on a road trip up Pacific Coast Highway to Carmel — “Travels with Mom” (an homage to John Steinbeck’s book) — but she wasn’t feeling it, so I looked instead to a dark novella taking shape in my mind around the oddity of a place called Devil’s Gate on the edge of Pasadena.

Not what everyone does, no.

Walk the fine line of madness, for sure.

Highlight human imperfections. And isn’t that the devil’s job in a nutshell?  Con them into selling their soul in a Faustian pact for vanity’s sake?

The night before departure a demon stalks me in my dreams — maybe the same gargoyle-like creature I encountered a dimension away in my bed at the Burford Inn at the Gateway to the Cotswolds in England 18 months earlier. In this nightmare, the demon is with me in the back seat of a shiny black sedan, taunting me to get out, spitting the words “Arroyo Seco, Arroyo Seco” — the very name of the haunted canyon that the artist Van Stein and I are about to visit.

The artist and I leave the our vehicle, nicknamed COW (for Clubhouse on Wheels) on La Canada Road and follow a gravel path by foot to Devil’s Gate Dam near NASA’s Jet Propulsion Laboratory, founded on Halloween 1936 by a handful of rocket buccaneers including Jack Parsons, whose passion when not producing rocket fuel was practicing sex and magic rituals under the tutelage of British occultist Aleister Crowley (known as The Beast), who, upon visiting from England, determined that the tunnel behind Devil’s Gate is “a portal to hell.”

A century earlier, the elders of a Native American tribe called Tvonga forbade everyone from venturing into what they believed to be a seriously haunted canyon.

At the bottom of a steep path, we must negotiate thousands of jagged rocks on the dry creek bed to reach our destination, winding through a jungle of dangling branches from half-dead trees, wild weeds and poison oak. When I turn around to look back, I feel déjà vu re-visualizing a dream I had one month earlier in which I was hiking along “The Canada River.”

Moments later, through a clearing, I catch my first glimpse of Satan’s profile chiseled into the rock by an unholy force of nature.

Approaching the notorious gate at the base of this evil crag, I reach for my sunglasses, but they’re gone — claimed by the devil, it seems, never to be seen again.

The double gates are bound by a thick chain, curled tight and clasped by a gigantic padlock, either to stop goodness going in or evil coming out, I’m not entirely sure. I poke my camera through the bars and snap a number of photos not knowing until a day later that I’d caught a whole bunch of demons — perhaps the devil itself — in one large orb.

Or maybe it (or they) caught me because a negative entity most certainly attached itself and accompanied us home.

Because that night, the devil has its own take on my intrusive visit to its lair, and it weighs in while I’m asleep during my first night home, muttering a double-barreled word I’ve never used, so I consult Merriam–Webster for a precise definition of “argle-bargle”: “Copious but meaningless talk or writing.”

All through the week, my dreams are agitated: Intruders coming into my home, fights breaking out around me; general disturbance.

And when awake, before my eyes my iPhone becomes subject to seizures, flashing storms; its keyboard, which I had not summoned, goes into a spasmodic frenzy all by itself, bouncing between letters and numbers and symbols, causing many strange indecipherable messages to appear in Notes.

Clearly, I need an antidote for Devil’s Gate — someplace spiritually uplifting where this strange new presence can be vanquished. Thus, I think about where I’m most at peace with myself, and what comes to mind is Carmel-by-the-Sea, a charming artist’s enclave up the coast.

I’m not a church person, tending away from organized religion in favor of personal spirituality and a general feeling that “God” is all around us and also within. Yet I nonetheless feel a hankering to attend Mass in a holy place for the purpose of dusting off the devil.

Carmel’s old Mission is named after Charles Borromeo, the patron saint of learning and the arts. Plus I already have a little history with Carmel relating to my quest against evil.

After deciding a few years ago that the devil is not in the detail but in the data and visiting Silicon Valley to door-step Google and Facebook and prove my point that the folks behind social media are anything but social and after touring the Computer History Museum and feeling physically and psychologically drained by data’s origins, I had a craving for someplace as completely different as possible and wound up 93 miles away in Carmel. I nicknamed the community “Dot-calm” after another dream in which the words “White 22” reverberated inside my skull.

Thus, on May 1, a Sunday, the day after Walpurgis Night and the last day of the occultist Beltane, Van Stein and I set off for the Monterey Peninsula and check into the Cypress Inn, founded by Doris Day, where dogs bring their pet people.

Carmel is calm and quiet, an aroma of pine in the fresh salt air. This is where artists and writers — the bohemians — settled after San Francisco’s devastating earthquake.

One of my early heroes as a young journalist was America’s first investigative reporter, Lincoln Steffens, who decamped to Carmel in the late 1920s to pen his bestselling autobiography after a career exposing the high and mighty, perceived by them as a traitor to his privileged class. But Steffens enjoyed (not suffered) ADHD and saw things his own way, not much caring for class (especially at school) and thus becoming an equalizer, siding with David over Goliath and utilizing the almighty pen as his sword.

My mission is The Mission — 5:30 Mass at San Carlos Borromeo — where inside this hallowed house of prayer, I intend to open myself to whatever message awaits me in the form of the priest’s opening words, whatever they may be.

After several hymns, a priest appears.

I brace myself for The Message.

These are the priest’s precise words: “Go to In-N-Out Burger and when you get there be decisive.”

But it is afterward, during dinner with one of my oldest, dearest friends at Mission Ranch, that the answer to vanquishing the devil is delivered: the music of Hildegard von Bingen, a Christian mystic whose liturgical hymns have endured ten centuries.