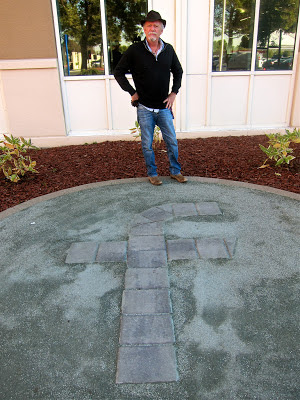 We consult The Tablet and navigate to FaceBook headquarters, situated at Hacker Way in Menlo Park.

There is no main entrance, no security gate and certainly no sign to herald the presence of the fabulous Facebook, but only an amorphous sprawl of buildings, unidentified, anonymous, part industrial park, part university campus. 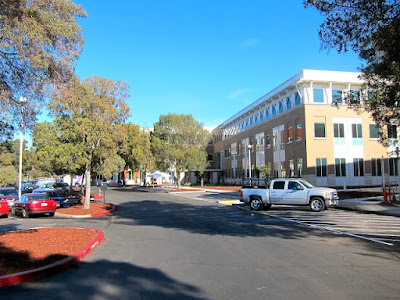 And, indeed, these multi-billion dollar kings of connectivity (who don’t know how to connect in person, human-to-human) are shaped (rather, unshaped) with the same monstrous cookie-cutter.

Come if you want, but you’ll make as much heads nor tails of us as if you were trying to contact us by e-mail, which is what you’ll have to do anyway, BECAUSE NO ONE WILL SEE YOU!

With FaceBook, there isn’t even a visitor’s entrance—at least not one we can easily find.

And not even a sign to tell anyone that this where the second most clicked site on the World Wide Web operates from.

We choose a building at random and barge in.

This lobby is bigger and brighter than Google’s, but with no identifiers, inside or out.

Two persons, one of them a security guard in uniform, sit behind a long counter and observe me with curiosity as I approach, Van Stein lagging behind to photograph the exchange. 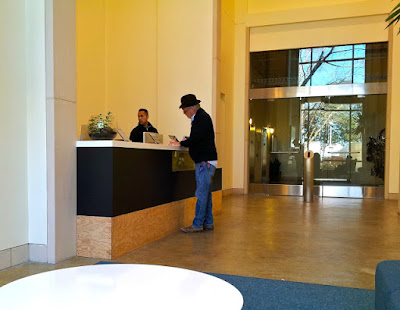 I make my pitch, same as I did to Google.

The young male regards me with a vacant expression, a hint of amusement in his eyes.

“I’ve tried to phone,” I continue.  “It’s impossible to connect to a human being.  I tried to email.  But no one answers.  So I’ve traveled a long way to see somebody in person.”

“But it’s important,” I say.  “Can’t you find a trainee junior assistant who has two minutes to talk to me?

He shakes his head.  “There’s no one.  You have to send an email to a support group.”

At this point, I wonder why Google and FaceBook even bother to put real people behind a counter.

Why not a robot?  (They’re probably working on it…)

“But FaceBook is supposed to be about connectivity,” I say.  “Isn’t it?”

The receptionist is unmoved; his colleague in uniform tenses.

“Your mission," I add, having read about this in a book, “is, and I quote, to make society more open.  What can possibly be open about not having anyone able to see me in person?”

The receptionist stirs, pushes a form and a pen across the counter.  “You can write FaceBook a message.  I’ll see that it the gets where it belongs.”

Wandering around outside, we inadvertently come upon the only clue that the fabulous FaceBook is truly present on this faceless site:  a circle of cement onto which is tiled (in another shade of gray) a large lower-case f.

Because, essentially, that’s the message:

We Zuck you in, store your data and market what you’re looking for directly to you before you even know you want it, but don’t contact us, you’re just data and we’re a data processor and it’s got nothing to do with humanity.

As for the time you lose while social networking on FaceBook?

Founder Mark Zuckerberg said it all when he dubbed his creation The Trance, which he expressly designed to be “hypnotic.” 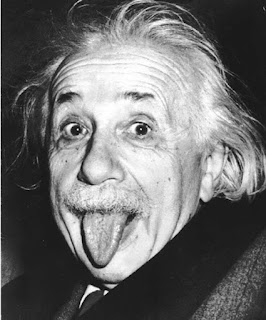 Put another way, by Albert Einstein (remember him, anyone born since 1990?):

“I fear the day that technology will surpass our human interaction.  The world will have a generation of idiots.”

Posted by Robert Eringer at 6:49 AM