Although Van Stein and I had planned a second night in Silicon Valley, we now crave someplace as completely different as possible and, fortunately, it isn’t that far away:  Carmel-by-the-Sea.

We’d done a TV show on Bolinas (The Unfindable Town), north of San Francisco, a couple years earlier, roughed it up for lack of choice and wound up in Carmel to wind it back down.

So we already know salvation is possible.

Not ninety minutes, later we grind into the cutesy enclave and aim straight for The Cypress Inn, feeling like two old dogs in search of a hot bath and a shave.

A pair of receptionists scramble to find us a pair of rooms and we’re in—a hotel that was created for dogs, with people tolerated because it’s tough for dogs to check in all by their selves.

It was Doris Day, co-owner of the inn, who pioneered the concept of pet-friendly hotel—and whose efforts eventually led to such pet policies at fine hostelries countrywide. 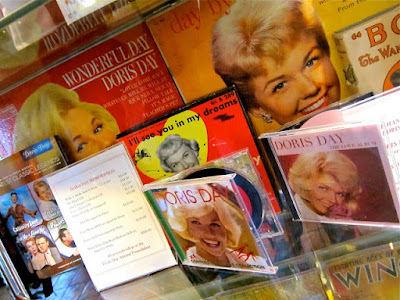 Doris, patron saint of dogs, also created the art world’s first installation (a trendy new term used by artists who wish to create a body of their work under one roof as a monument to themselves) without knowing what she was doing, transforming her inn into a living museum that features a comprehensive collection of posters from every movie in which Doris starred, with every famous leading man of her day, along with other mementoes of her long career, extending to Terry’s Bar, in memory of her only child, whom she outlived.  (Terry Melcher died in 2004 from melanoma.)

It was dear Doris, we discover, who disconnected from social networks long before they went virtual on the Internet, retiring as a recluse into her own reality—a world where dogs take priority to people.

Here, in The Cypress Inn, dogs occupy overstuffed chairs in the lobby with pet people in tow.

Beat up by the devilish Computer Museum, by Google and Facebook, I suddenly recall a letter to a book publishing imprint I once co-owned from a would-be author, a letter so poetic, if acutely insane, that I kept it twenty years knowing the right moment would come along for its use:

What does St. Bernard’s Roman Catholic Church, God, the Yellow Dog Garage, Kibbles ‘n’ Bits Dog food, a miniature white French Poodle named Salt, Red Dog Canadian Beer, a miniature black French Poodle who is the brother of Salt, named of course Pepper, a Hockey Hounds sweater, a Dogwood tree next to the edge of a back road that leads into Genesco, NY, a female St. Bernard aptly named Big Bertha, a Greyhound Bus, a truck with the inscription “Toad Dawg” on the back, a Big Dogs tee shirt with a St. Bernard portrayed wearing a backpack standing up on the top of a mountain along with the inscription “Big Dogs like it on top,” the Olean huskies high school football team, the first baseman for  the Atlanta Braves named Fred McGriff who is nicknamed “The Crime Dog” because McGriff and McGruff are so close, a golden Labrador retriever named Sampson, the frenzied cheering section at the Cleveland Browns home games called the “Dog Pound,” a wiener dog named Homer, a hotdog named the “wonder dog” that was dedicated to Frank Reich (Frankfurter) who is Jim Kelly’s back-up on the Buffalo Bills after he orchestrated the greatest comeback in NFL history in the playoffs against the Houston Oilers a few years back who is also responsible for orchestrating the greatest comeback in college football history when he played for the Maryland Terrapins, the celebrity bulldog Ike on Kibbles ‘n’ Bits Dog food who carries the last three letters of the nickname “Spike” that my high school science teacher John Kibby gave me five years ago when I was in his class, and now it’s been a little while, so to finish off my question, all have in common?

They are all tied in or associated with a “Dog” in some way.  Because the whole point is “God” is “Dog” when read from last to first or from Omega to Alpha, which are the two terms used to describe the Heavenly Father and the Holy Spirit in the Bible.

Why God chose that very name to identify himself with?  Why not “Big Bertha” because he gave birth to the earth?

I’m thinking about titling my manuscript “Big Bertha, God of the Dogs.”  Which makes perfect sense if you know what I mean.

I hadn’t known what he meant until this moment.

Now surrounded by dogs in St. Doris’s installation, I realize that dogs are the only angels on this planet and that humankind, largely influenced by the devil, is inadvertently replacing itself with artificial intelligence.

So did God create dog in his image while the devil created man in its own?

Looking at human history and its beastliness towards just about everything—including itself and dogs—it is a valid, if displeasing, question.

Van Stein and I head into town by foot.

I’d been thinking about buying a mini-iPad and almost did at the Apple Store in Palo Alto.

But instead, here in Carmel, at Bittner, I opt for a Visconti rollerball pen (their Homo sapiens lava pen, it transpires) and a Rhodia leather memo pad... 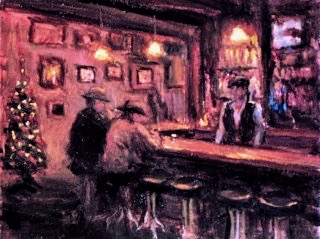 ...and we hit Sade's for a well-earned whiskey and a cigar.

Posted by Robert Eringer at 7:30 AM