BAKED 2: LUNACY AT ITS SNOTTIEST 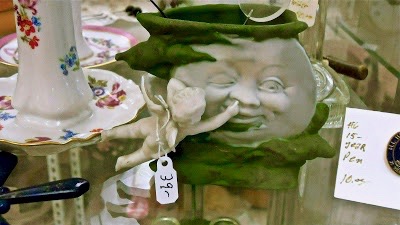 Andrew phones.  He was supposed to join us on this road trip to Bakersfield but we gave him the slip, reasoning that he’d probably get us into trouble, not understanding at this point that we didn’t need Andrew for this because trouble in this strange place would be easy even without having him along and now we’d lost the opportunity to sacrifice him, in a squeeze, to save our own sorry skins.

“When are we leaving?” asks Andrew.

“You were supposed to be at my place at 9:03 this morning, remember?”

“That’s not what you told me!” Andrew hollers.

“Did I say that?  Damn, Andrew, sorry.  But don’t worry, you’re not missing much—it’s over a hundred degrees out here and we can’t even get rooms.  But if you want, jump in your car and drive on out and...”

“You know I don’t have any money for gas.” 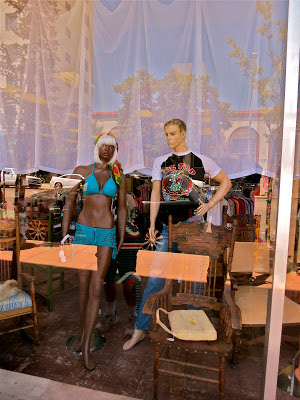 I do.  Andrew doesn’t have any money for anything, which is another reason we gave him the slip.

Contemplating thrift shop windows, I realize there is something very strange about the mannequins clad in old garments that even the Salvation Army would refuse, but I go inside anyway to escape The Bake’s extreme heat and bleak cityscape, which seems constructed to break any man’s spirit.

That’s where I find a memento, which I can buy and quickly call it a trip, adios, Bakersfield: a porcelain angel picking the moon’s nose.

Lunacy at its snottiest. 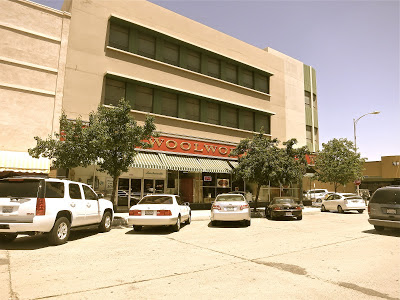 Further on, F.W. Woolworth (no longer a dime store but another junk shop) sucks us into its soda fountain, which serves Folgers coffee.  (Starbucks had the good sense not to open here.) 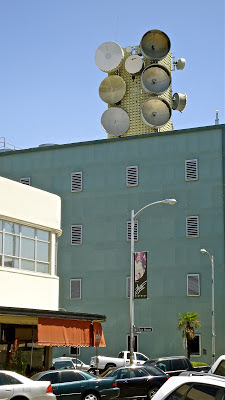 Walking around on heightened alert, I become the recipient of beamed messages from The Bake's landmark towers:

Van Stein looks at me, alarmed.
“Are you hearing that, too?”

But it’s already too late because the car is gone or maybe we can’t find it and by this time we are feeling desperate... 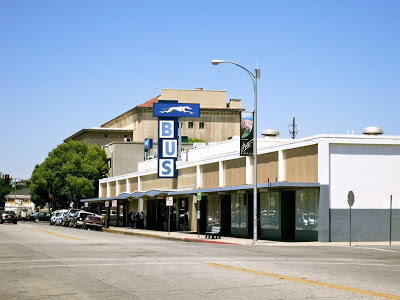 ...so we rush into the Greyhound Bus Station... 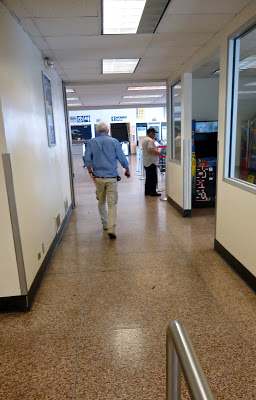 ...only to discover every departure has been cancelled...