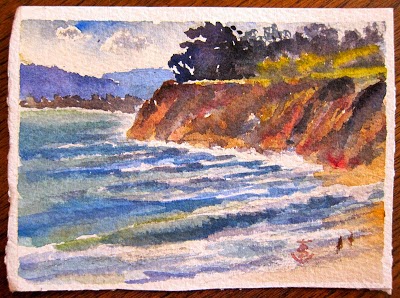 Emergencies only:  (my cell phone number)

This is the calling card I conjure up (if only in my mind) to reflect my incognito-ness, though I’ve always eschewed CVs and business cards–anything, in fact, which leads a trail back to wherever I am.

For wheels, a Jeep Liberty sets the right pace. And with Independence Day approaching, my presence in Montecito feels like it was designed in heaven, which, in this village, is pitch black, cloudless and decorated by a multitude of stars.

My new office, Starbucks, is everyone’soffice, including Dennis Miller, Rob Lowe and Peter Noone a.k.a. Herman of the Hermits.

It is also headquarters for the coffee-mom contingent, though these aren’t moms you’d see in Indiana or New Jersey, but blonde ex-models who have made a bundle shooting the swimsuit issue for Sport’s Illustrated, or they were aspiring models until they married a bag of bones, more than once…

Aside from all the expensive nips and tucks (men, too), you still cannot tell these are mostly multi-millionaires, because the moment someone abandons a News-Press, three or more Montecitans pounce upon it, not wanting to part with fifty cents for their own newspaper.

The worst culprit, a displaced Brit named Michael Murphy, is partly responsible for my move here because of some unsolicited if sage advice he conveyed at the Montecito Bar as I conducted pre-move reconnaissance over Grey Goose, up, three olives:  “You’re only here a short time, you might as well live someplace nice.”

Murphy is not content with grabbing just one newspaper, but scours Starbucks collecting as many as he can find, for reasons only a psychiatrist might understand.

Make no mistake:  There is no place finer place to live than mellow Montecito.

Talk about mellow:  After a few days, your wristwatch slows down.

Talk about mellow:  You cannot order a glass of water without whipped cream.

Talk about mellow:  The tree in my garden sprouts cotton candy.

Donna Karan lunches in the open-air at Tutti’s while I pump gas next to Jeff Bridges pumping his own at the corner 76 station, which, on a quiet Sunday morning, could have been painted by Edward Hopper. 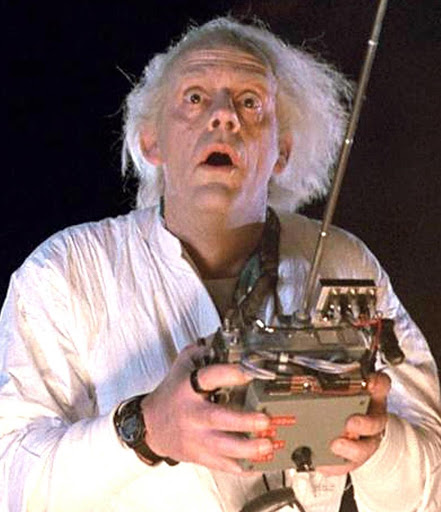 I round into Mailboxes Etc to collect my mail and almost collide with Christopher Lloyd, the mad professor from Back to the Future, inducing him into the kind of startled, bug-eyed body-freeze people pay good money to see at the movies, though I now realize this is not method acting but a natural reaction he produces naturally. 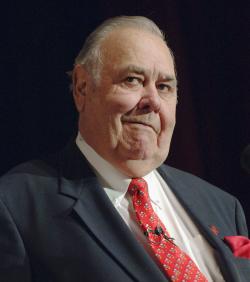 ...fondling cantaloupe in the produce department at Vons, I want so badly to break the unwritten, unspoken Montecito code about approaching celebrities (don’t) but I restrain myself.  For now.

Most American and British comedians, on a wavelength exclusive to funny people, have somehow found Montecito and settled (too seriously for my taste) into life behind the hedges, where they can hide out from those whose ribs they tickle.

John Cleese is said (by himself) to have embarked on a road-trip from LA to scout a second home somewhere along the Pacific Northwest yet traveled no further than mellow Montecito. 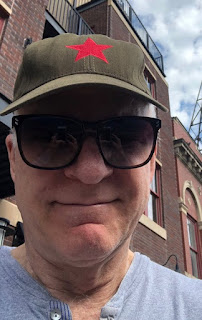 Hollywood North.  Behind the Hedge. Asylum Without Walls.  Three of Montecito’s monikers.

Movie and television actors lurk everywhere, though most residents are first generation rock ‘n’roll songwriters with forty-plus years’ royalties behind them and TV sit-com writers who won the lottery when their laugh-track hit a hundred and went into syndication after ruining yet another generation.

The latter are constantly hoping to be recognized by someone, anyone, preferably a movie or TV celebrity and this results in the Montecito Look: Whenever you walk into a bar or restaurant, whether it’s Tom’s Coffee Shop (Robert Mitchum‘s final hangout, adjacent to the old-fashioned San Ysidro Pharmacy) or Lucky’s bar and grill, the natives look up to see who you are (or aren’t).

Like most places, the natives can tell whether or not you belong by how you’re dressed.  The Montecito male attires himself in a Hawaiian shirt hanging over blue jeans (only dweebs tuck them in).

Never, ever wear shorts at night, no matter how warm it is.

The appropriate footwear is Merrell slip-ons.

If you’re wearing a crew-neck black tee, you are obviously from LA, so you’re the least welcome of all because you still have something to prove (loudly, often profanely, over your cell phone, non-stop), because you’re still waiting to score high enough in Hollywood to buy a second home in Montecito or move in full-time and you’re probably over-caffeinated and honking your horn (whether you’re driving a car or not).

Black apparel is for big cities.  In these bucolic parts, brown is the suitable color for adorning oneself.

The first section I consult in the daily News-Press is not news, but the tide report.  This is for scheduling long walks at low tide along Butterfly Beach (sunset and moonrise times, also noted), a stretch of fine sand and gentle rolling waves framed with pure white flotsam.

Dolphins swim past, waving their flippers; a fat seal lounges on his favorite boulder when the tide pulls out.

I call it The Club.  It is healthier, more fitness oriented and socially stimulating than fancy-pants country clubs that charge a hefty membership fee and monthly dues then tell you what to wear and how to behave.

When you pass another native walking the beach, there’s an acknowledgement (a wink, a nod) that you are privy to a magical secret with these unspoken words:  Too blessed to be stressed.

Montecito sits on a coastline facing south over the ocean (not west, like the rest of California) and thus enjoys a unique microclimate.

The Santa Ynez Mountains behind the city and the uninhabited Channel Islands, a nature preserve twenty miles out, ensure that the American Riviera never heats much beyond seventy-five degrees Fahrenheit nor cools below the low forties at night, year-round.

Butterfly Beach abounds with pleasant views of the islands, the mountains and pretty young women in bikinis.

The Montecito ‘tude:  Done what I wanted to do (and earned dough doing it), now I’m going to have some fun!

Or, as a local realtor puts it, “People around here do what they want.  If they get caught, they ask for forgiveness, it’s easier than permission.”

Entry fee to this climate-controlled coastal paradise:  Over two million for a two-bed, two bath cottage (Oprah Winfrey paid $51 million for her estate), though you can rent reasonably if you don’t mind railroad tracks, like, right next to them, sandwiched between Interstate 101.  The good news:  After a few nights your brain develops an immunity to the 4:42 Amtrak that screeches by, horn a-blare, as if it‘s coming through your window.

Around five o’clock when the sun begins to set, a watering hole/steak & chop house on the east end of Coast Village Road hosts the Montecito Mellowest. 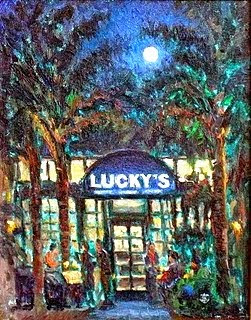 Lucky’s exudes relaxed elegance, its walls adorned with black-and-white photographs of famous thespians and crooners (mostly dead) in homage to Hollywood as it once was.

Servers are dressed formally, but management does not expect the same of its laid-back patrons, the likes of whom include folk-rocker David Crosby, who grew up in Montecito and drives in from Santa Ynez for beef stroganoff; the carrot-topped novelist T.C. Boyle, in trademark red Converse sneakers; Kirk Douglas, Carol Burnett, Bo Derek and Oprah, who prefers to book the whole place when she has a craving for steak and chops and Lucky‘s Fries and salty turtle sundaes.

A beer comes in a frosted mug, poured by Matt or Ezra; dry martinis are stirred to perfection.

Charlie Chaplin’s ghost is often present, when he gets bored with the Montecito Inn (next door), which he created in 1928 as a weekend getaway for himself and friends.  Now Charlie pulls playful pranks on patrons.  For instance, he’ll jerk a barstool, prompting a male customer to pratfall while concurrently causing a female to slip on an imaginary banana skin and they’ll engage each other on the floor—Charlie’s slapstick style of sparking seduction.  Strangely, no injuries occur from these pratfalls and slippages (which of course have nothing to do with martinis.)

Charlie, costumed as The Tramp, is seen walking through walls in Lucky’s Bamboo Room; he flicks empty glasses off serving trays, incessantly taps the shoulders of chosen patrons, and, when washrooms are occupied, switches the lights off or jiggles sliding locks to show “vacant,” resulting in mirthful (if mortifying) encounters.

Lucky’s Table 80 belongs to Charlie.  That’s the one whose candle mysteriously alights at evening’s end when all other candles, and lights, are extinguished.

Some locals strain to transform the role of sycophant into an art and also a science, browning their noses upon Rob Lowe from bar to dining room with less dignity than the parking valet, who actually has incentive (a big tip) to sniff celebrity flatulence.

This all provides exceptionally good theater, starring household names, with sides of creamed corn and rapini with garlic.

And it means Rob Lowe has at least a few fawning fans in town.  Many others groan about the actor’s audacious property development, which allegedly imposes upon the views of his equally finicky neighbors, not only at Lowe’s Montecito estate but also

his nearby Summerland beach house.

A new adage has been coined just for Montecito:  Do for yourself and complain when others do it too.