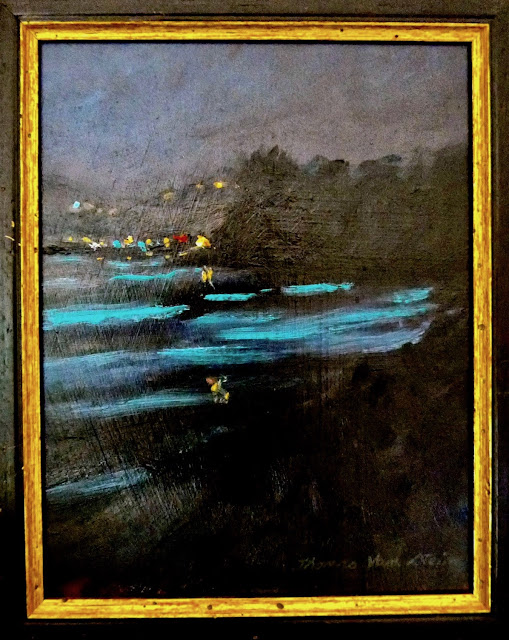 He has been awake for three days and nights, assembling his one-man show opening tonight and now we stand face to face for the first time, he manic-eyed with a four-day stubble and a New Orleans Saints baseball cap tilted askew over his thinning auburn hair, saliva dribbling from his lower lip.

I‘d been inside the gallery perusing an assortment of crescent, quarter, gibbous and full moons illuminating a variety of nocturnal landscape paintings already on the walls.

He freezes, focuses his bloodshot eyes upon me, drops down on one knee to unload his new work, rises, leans forward on the ball of his right foot and, in a fencing lunge, thrusts his right hand at me. “Thomas Van Stein.”

Bottoms, a member of the Bottoms brothers acting clan, owns a niche gallery inside the nearby Biltmore Hotel nearby where, a few months earlier, I’d bought a moody Van Stein nocturne, Butterfly Beach with Phospherous Waves.

“Excellent,” says Van Stein.  “Where are you from?”

This simple question always vexes me.

I was actually made in Los Angeles, only ninety-one miles south of where we stand, but moved with family to London when I was fourteen, then moved myself onto Monaco and Washington D.C., swapping them intermittently, thus rendering the concept of where I’m from confusing to me, let alone countless others who have filled whole pages of address books with my ever-changing coordinates.

In fact, I’m suffering undercover burnout and need a beach to tread for a few months at least.  Mellow Montecito feels right.  That’s why I sold my house in DC and traded my navy blazer for Tommy Bahama togs; my own version (the tongue-in-cheek variety) of a federal witness protection program.

The American Riviera is a lot like its French cousin:  same topography, similar climate and daily celebration of fine wine and cuisine, but without the French language, whose five tenses are designed to tense Americans tighter than a debutante’s derriere at a coming out party.

The Cote d’Azur was where I’d been reaming, through ruses, a couple rogue spies and a fugitive murderer so hiding out there was not an option.

“I’d like to see you paint sometime,” I say to Van Stein, knowing he is a plein-air artist, a French term meaning in the open air, which suggests he gets his butt out to whatever he’s painting rather than inside his studio.

Not exactly what I have in mind.

“Hey,” the artist continues, “when the moon’s out, I gotta to produce.  Or come to Butterfly on the fourth. I’ll be there painting the fireworks.”

Neither of us knows it yet, but we’ve been paired and called to departure for an extraordinary journey.

Posted by Robert Eringer at 9:23 AM