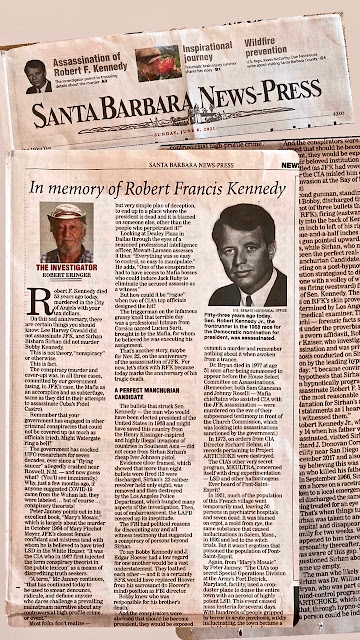 Robert F. Kennedy died 53 years ago today, murdered in the City of Angels with your tax dollars.

On this sad anniversary, there are certain things you should know: Lee Harvey Oswald did not assassinate JFK and Sirhan Bishara Sirhan did not murder Bobby Kennedy.

This is not theory, “conspiracy” or otherwise.

The conspiracy (murder and cover-up) was, in both cases, committed by our government (using, in JFK’s case, the Mafia as an accomplice and as subterfuge, same as they did in their attempts to assassinate Cuba’s Fidel Castro).

Do recall, your government has engaged in other criminal conspiracies that could not be covered up (as much as they tried). Might Watergate ring a bell? The government has mocked UFO researchers for seven decades, ever since a “flying saucer” allegedly crashed near Roswell, New Mexico—and now guess what?  (You’ll see imminently.) Why, just a few months ago anyone who suggested COVID-19 came from the Wuhan Lab, they were labeled… but of course… conspiracy theorists!

Peter Janney points out in his excellent book, Mary’s Mosaic, which is largely about the murder in October 1964 of Mary Pinchot Meyer, JFK’s closest female confidant and mistress (and with whom he is believed to have tried LSD in the White House), “It was the CIA who in 1967 first injected the term conspiracy theorist in the public lexicon” as a means of discrediting truth-seekers. “A term,” Janney continues, “that has continued today to be used to smear, denounce, ridicule, and defame anyone who dares challenge a prevailing mainstream narrative about any controversial high-profile crime or event.”

Most folks don’t realize—because, beyond tweets and texts, people don’t read much anymore—that numerous congressional, judicial and journalistic investigations have proven time and again through the past five decades that fundamental forensic “findings” in each case were seriously flawed and part of a shameful sham that, in too many cases, led those who witnessed these events to an untimely appointment with the grim reaper, including Mary Pinchot Meyer, who refused to accept the now discredited Warren Commission findings (which had been published one month before she was killed) and who had made disruptive waves among DC’s elite. (Her murder, along a quiet canal near her Georgetown home, has never been solved.)

We the people have been played for decades, deceived by a magician’s sleight of hand, manipulated into buying a narrative perpetuated by a mainstream media that has long been corporatized and forever willing to buy the “official” line, unwilling to report new developments and leaving cold hard facts to what they like to call “the fringes.”  (Social media is part of this dumbing-down process, filtering out everything that does not fit the approved narrative and ever shortening the attention span of all those who utilize it, especially the young.)

And that’s how the conspirators get away with it every time.

You can read whole books (very many exist, most scholarly) or view documentaries and piece the truth together from many perspectives.

Or I can save you the trouble by revealing what truly went down.

JFK was assassinated by a CIA/Mafia team with complicity near the very top of that agency.

Rolf Mowatt-Larssen, a former CIA operations officer who rose in the ranks to European Division Chief, recently came to the realization that this crime was the culmination of a “rogue” covert operation organized by his former employer.

“There had to be operations officers,” he states. “How can you get away with a really elaborate but very simple plan of deception, to end up in a place where the president is dead and it is blamed on someone else, other than the people who perpetrated it?” Looking at Dealey Plaza in Dallas through the eyes of a seasoned professional intelligence officer, Mowatt-Larsen assesses it thus: “Everything was so easy to control, so easy to manipulate,” adding, “one of the conspirators had to have access to Mafia bosses who could induce Jack Ruby to eliminate the accused assassin as a witness.”

But how could it be “rogue” when two of CIA’s top officials designed the hit?

The triggerman on the infamous grassy knoll that terrible day was professional hitman from Corsica named Lucien Sarti, brought in by the Mafia, for whom he believed he was executing his assignment.

That’s another story, maybe for November 22nd. But for now, let’s stick with RFK because today is his day.

The bullets that struck Senator Kennedy, the man who would have been elected President of the United States in 1968 and might have saved this country from the Henry Kissinger-inspired and highly illegal invasions of countries in Southeast Asia, did not come from Sirhan Sirhan’s cheap Iver Johnson pistol. Evidence (doorframes) showing that more than eight bullets were fired (thirteen were discharged, Sirhan’s .22 caliber revolver held only eight) was removed and then destroyed by the Los Angeles Police Department (LAPD), which bungled many aspects of the investigation and then, out of embarrassment, covered up their ineptitude.

The FBI had political reasons for discounting any and all witness testimony that suggested a conspiracy of persons beyond Sirhan. To say Bobby and J. Edgar Hoover had a low regard for one another would be vast understatement. They loathed each other—and it is a certainty RFK would have replaced Hoover from his sacrosanct (to Hoover’s mind) position as FBI director.

Bobby knew who was responsible for his brother’s death. And the conspirators were alarmed that should he become president they would be exposed and their beloved institution dismantled (as JFK had vowed to do after the CIA misled him on their failed invasion at the Bay of Pigs in Cuba).

A second gunman, standing behind Bobby, discharged the fatal shot (of three bullets that struck RFK), firing (eastward) directly into the back of Kennedy’s head an inch to left of his right ear from one-and-a-half inches away, from a gun pointed upward.

This, while Sirhan, who may have been the perfect real-life Manchurian Candidate, was acting on a post-hypnotic suggestion strategized to distract everyone with a volley of wild, aimless firing (westward) from in front of Senator Kennedy. The powder burns on RFK’s skin proved this, as determined by LA’s Chief Medical Examiner, Thomas Noguchi—forensic facts swiftly swept under the proverbial rug.

In a sworn affidavit, Robert Blair Kaiser, who investigated the assassination and was privy to hypnosis conducted on Sirhan in prison by the leading hypnotists of the day: “I became convinced that the hypothesis that Sirhan had been hypnotically programmed to assassinate Robert F. Kennedy was the most reasonable explanation for Sirhan’s action and statements as I heard about and witnessed them.”

Robert Kennedy, Jr., who was only 14 when his father was assassinated, visited Sirhan at the Richard J. Donovan Correctional Facility near San Diego in December 2017 and also came away believing this was not the man who killed his father.

In September 1966 Sirhan fell from a horse on a racetrack. He was taken to a local emergency room and discharged the same day after being treated for an eye injury. That’s when things turn murky. Sirhan was taken to another hospital and disappeared from his family for two weeks. Whatever happened to him there altered his personality thereafter. The LAPD were aware of this gap. They questioned Sirhan about it but came up empty.

The man who likely hypnotized Sirhan was Dr. William Joseph Bryan who was part of a CIA mind-control program, Project ARTICHOKE, which determined that, through hypno-conditioning, a person could be induced to commit a murder and remember nothing about it when awoken from a trance.

Bryan died in 1977 at age 51 soon after being summoned to appear before the House Select Committee on Assassinations. (Remember, both Sam Giancana and Johnny Roselli—Mafia chieftains who assisted CIA with the JFK assassination—were murdered on the eve of their subpoenaed testimony in front of the Church Commission, which was looking into assassinations sanctioned by the government.)

In 1973, on orders from CIA Director Richard Helms, all records pertaining to Project ARTICHOKE were destroyed.

CIA’s other very secret program, MKULTRA, concerned itself with drug experimentation—LSD and other hallucinogens.

In 1951, much of the population of this French village went temporarily mad, leaving fifty persons in psychiatric hospitals and seven dead. It was blamed on ergot, a mold from rye, the same substance that caused hallucinations in Salem, Massachusetts in 1692 and led to the witch trials. But it wasn’t ergotism that poisoned the population of Pont-Saint-Esprit.

Back to RFK. The “security guard” who stood behind Bobby—armed with a pistol—was not even called as a witness at Sirhan’s trial and for decades was considered by journalistic investigators as the prime suspect.

The mystery of “the lady in the polka dot dress” was finally solved by Tim Tate and Brad Johnson, authors of The Assassination of Robert. F. Kennedy.

Now deceased, this woman was identified three years ago as Elayn Neal, whose photo was positively identified by all seven witnesses who claimed to have seen her that night; she, the lady who, rushing down an outdoor stairway cried out, “We shot him!”  A young Kennedy campaign worker named Sandy Serrano, who had stepped outside for fresh air, asked, “Who did you shoot?” Fleeing, the lady replied, “Senator Kennedy!”

Earlier, this lady had been seen (by multiple witnesses) with Sirhan in the hotel’s kitchen where RFK was shot. It is believed that a pinch from “the lady in the polka dot dress” induced Sirhan’s trance.

According to her family, Elayn would often disappear for long periods of time. In 1966, Elayn married Jerry Capehart who, one of his sons told author Brad Johnson, worked “on mind-control experimentation” for the CIA.

We are still being played and gamed.

The United States has become a nation of we the sheeple, hypnotized by social media.

Please know that “history” is only an accepted mainstream narrative. Or, as French Emperor Napoleon Bonaparte aptly put it, “History is a set of lies agreed upon.”

Never trust the government to tell you the truth and to know what is best for you.

Think for yourself and always question authority.

Posted by Robert Eringer at 6:59 AM