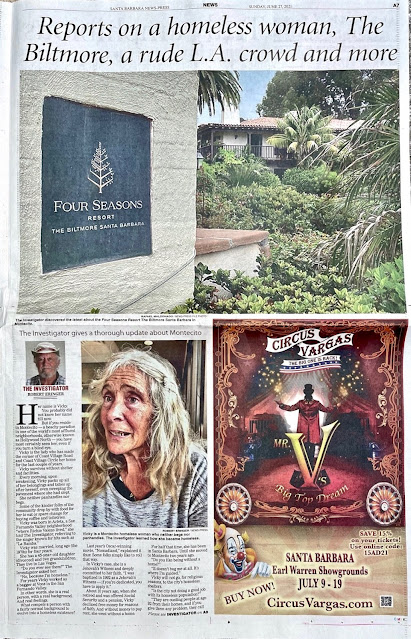 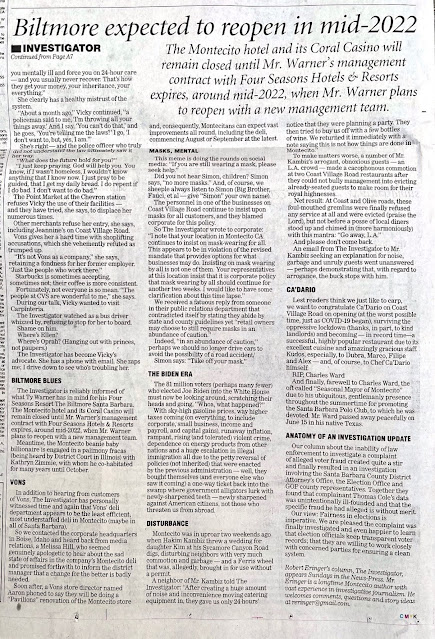 Her name is Vicky.

You probably did not know her name till now.

But if you reside in Montecito—a beachy paradise in one of the world’s most affluent neighborhoods, otherwise known as Hollywood North—you have most certainly seen her, even if you turn a blind eye.

Vicky survives without shelter and facilities.

Every morning, upon awakening, Vicky packs up all of her belongings and tidies up after herself, even sweeping the pavement where she had slept.

She neither panhandles nor begs.

Some of the kinder folks of the community drop by food for her to eat or spare change for buying coffee and toiletries.

Vicky was born in Arleta, a San Fernando Valley neighborhood “where Richie Valens lived,” she told The Investigator.

She has a 45-year-old daughter (divorced) and two grandchildren. They live in Las Vegas.

“No, because I’m homeless.”

For years Vicky worked as a meat wrapper at Vons in the San Fernando Valley.

In other words, she is a real person, with a real background. And real feelings.

What compels a person with a fairly normal background to evolve into a homeless existence?

Last year’s Oscar-winning movie, Nomadland, explained it thus: Some folks simply like to roll that way.

About ten years ago, when she retired and was offered social security and a pension, Vicky declined free money for reasons of faith. And without money to pay rent, she went without a home.

For half that time she has been in Santa Barbara. Until she moved to Montecito two years ago.

Vicky will not go, for religious reasons, to the city’s homeless shelters.

“Is the city not doing a good job with its homeless population?”

“They are ousting people at age 92 from their homes and if you give them any problem they call you mentally ill and force you on 24-hour care—and you usually never recover. That’s how they get your money, your inheritance, your everything.”

She clearly has a healthy mistrust of the system.

She’s right—and the police officer who truly did not understand the law ultimately saw it her way.

“What does the future hold for you?”

“I just keep praying. God will help you. You know, if I wasn’t homeless I wouldn’t know anything that I know now. I just pray to be guided, that I get my daily bread. I do repent if I do bad. I don’t want to do bad.”

The Point Market at the Chevron station refuses Vicky the use of their facilities—and they have tried, she says, to displace her numerous times.

Other merchants refuse her entry, she says, including Jeannine’s on Coast Village Road.

Vons gives her a hard time with shoplifting accusations, which she vehemently refutes as trumped up. “It’s not Vons as a company,” she says, retaining a fondness for her former employer. “Just the people who work there.”

Starbucks is sometimes accepting, sometimes not; their coffee is more consistent.

Fortunately, not everyone is so mean. “The people at CVS are wonderful to me,” she says.

The Investigator watched as a bus driver whizzed by, refusing to stop for her to board.

Where’s Oprah? (Hanging out with princes not paupers.)

The Investigator has become Vicky’s advocate. She has a phone with e-mail, she zaps me, I drive down to see who’s troubling her.

The Investigator is reliably informed of what Ty Warner has in mind for his Biltmore Hotel in Montecito: The Biltmore and Coral Casino will remain closed until Ty’s management contract with Four Seasons Hotels & Resorts expires, around mid-2022, when Ty plans to reopen with a new management team.

Meantime, the beanie baby billionaire is engaged in a palimony fracas (being heard by District Court in Illinois) with Kathryn Zimmie, with whom he cohabitated for many years until October 2020.

In addition to hearing from customers of Vons, The Investigator has personally witnessed time and again that Vons’ deli department appears to be the least efficient, most understaffed deli in Montecito (maybe in all of Santa Barbara).

So: we contacted Corporate in Boise, Idaho and heard back from Media Relations, a Melissa Hill, who seemed genuinely apologetic to hear about the sad state of affairs in their Montecito deli and promised forthwith to inform their district manager that a change for the better is badly needed.

Soon after, a Vons store director named Aaron phoned to say they will be doing a “Pavilions” renovation of the Montecito store and, consequently, Montecitans can expect vast improvements all round, including the deli, commencing August or September, latest.

This meme is doing the rounds on social media: If you are still wearing a mask, please seek help.

Did you not hear Simon, children? Simon says, no more masks. And, of course, we sheeple always listen to Simon (Big Brother, Fauci, et al—give “Simon” your own name).

The personnel in one of the businesses on Coast Village Road continue to insist upon masks for all customers and they blamed corporate for this policy.

So: The Investigator wrote to corporate:“I note that your location in Montecito CA continues to insist on mask-wearing for all. This appears to be in violation of the revised mandate that provides options for what businesses may do. Insisting on mask wearing by all is not one of them. Your representatives at this location insist that it is corporate policy that mask-wearing by all should continue for another two weeks. I would like to have some clarification about this time lapse.”

We received a fatuous reply from someone in their Public Relations Department that contradicted itself by stating they abide by state and county guidelines yet “retail owners may choose to still require masks in an abundance of caution.”

Indeed, “in an abundance of caution” perhaps we should no longer drive cars to avoid the possibility of a road accident…

Simon says, take off your mask.

The 81 million voters (perhaps many fewer) who elected Joe Biden into the White House must now be looking around, scratching their heads and going, Whoa, what happened?  With sky-high gasoline prices, way higher taxes coming (on everything, to include corporate, small business, income & payroll and capital gains), runaway inflation, rampant, rising violent (and tolerated) crime, dependence on energy products from other nations and a huge escalation in illegal immigration all due to the petty reversal of policies (not inherited) that were enacted by the previous administration… well, they bought themselves (and everyone else who saw it coming) a one-way ticket back into the swamp where government alligators lurk with newly-sharpened teeth—that is, newly sharpened against American citizens, not those who threaten us from abroad.

Montecito was in uproar two weekends ago when Hakim Kambiz threw a wedding for daughter Kim at his Sycamore Canyon Road digs, disturbing neighbors with very much commotion and garbage—and a Ferris Wheel that was, allegedly, brought in for use without a permit.

A neighbor of Mr. Kambiz told The Investigator: “After creating a huge amount of noise and inconvenience moving catering equipment in, they gave us only 24 hours’ notice that they were planning a party. They then tried to buy us off with a few bottles of wine. We returned it immediately with a note saying this is not how things are done in Montecito.”

To make matters worse, a number of Kambiz’s arrogant, obnoxious guests—an LA-crowd—made a cacophonous commotion at two Coast Village Road restaurants after they could not bully management into evicting already-seated guests to make room for their royal highnesses.

Net result: At Coast & Olive these foul-mouthed gremlins were finally refused any service at all and were evicted (praise the Lord), but not before a posse of local diners stood up and chimed in (more harmoniously) with this mantra: Go away, LA.

And please don’t come back.

An email from The Investigator to Mr. Kambiz seeking an explanation for noise, garbage and unruly guests went unanswered—perhaps demonstrating that, with regard to arrogance, the buck stops with him.

Lest readers think we just like to carp, we want to congratulate Ca’Dario, Coast Village Road, on opening (at the worst possible time, just as COVID-19 began), surviving the oppressive lockdown (thanks, in part, to kind landlords) and becoming—in record time—a successful, highly popular restaurant due to their excellent cuisine and amazingly gracious staff. Kudos, especially, to Dubra, Marco, Filipe and Alex—and, of course, to Chef Ca’Dario himself.

And finally, farewell to Charles Ward, the oft called “Seasonal Mayor of Montecito” due to his ubiquitous, gentlemanly presence throughout the summertime for promoting the Santa Barbara Polo Club, to which he was devoted. Mr. Ward passed peacefully on 15 June in his native Texas.

ANATOMY OF AN INVESTIGATION UPDATE

Our column about the inability of law enforcement to investigate a complaint of alleged voter fraud created quite a stir and finally resulted in an investigation involving the DA’s Office, the Election Office and GOP county representatives. Together they found that complainant Thomas Cole’s data was unintentionally ill-founded and that the specific fraud he had alleged is without merit.

Our view: Fairness in elections is imperative. We are pleased the complaint was finally investigated and even happier to learn that election officials keep transparent voter records; that they are willing to work closely with concerned parties for ensuring a clean system.

Posted by Robert Eringer at 6:55 AM