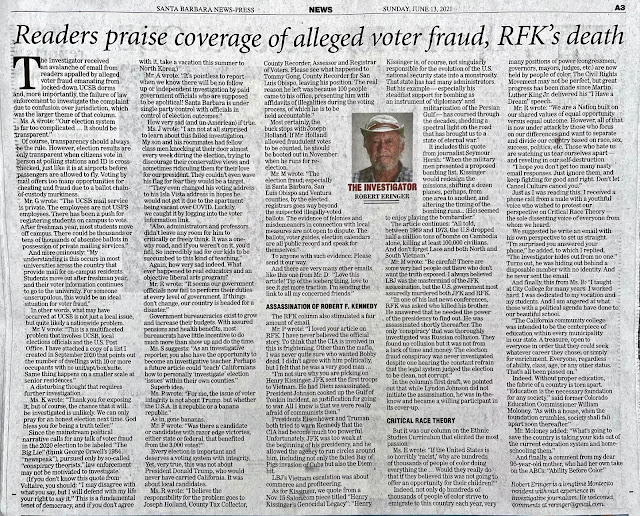 The Investigator received an avalanche of e-mail from readers appalled by alleged voter fraud emanating from locked-down UCSB dorms and, more important, the failure of law enforcement to investigate the complaint due to confusion over jurisdiction, which was the larger theme of that column.

Ms. A wrote: Our election system is far too complicated… it should be transparent.

Of course, transparency should always be the rule. However, election results are only transparent when citizens vote in person at polling stations and ID is cross-checked, just like it is at airports before passengers are allowed to fly. Voting by mail offers too many opportunities for cheating and fraud due to a ballot chain-of-custody murkiness.

Mr. G wrote: The UCSB mail service is private. The employees are not USPS employees. There has been a push for registering students on campus to vote. After freshman year most students move off campus. There could be thousands or tens of thousands of absentee ballots in possession of private mailing services.

And more ominously: My understanding is this occurs in most universities across the country that provide mail for on-campus residents. Students move out after freshman year and their voter information continues to go to the university. For someone unscrupulous this would be an ideal situation for voter fraud.

In other words, what may have occurred at UCSB is not just a local issue but quite likely a nationwide problem.

Mr. V wrote:  This is a multifaceted problem that involves UCSB, local elections officials, and the US Post Office. I have attached a copy of a list I created in September 2020 that points out the number of dwellings with 10 or more occupants with no unit/apt/box/suite. Same thing happens on a smaller scale at senior residences.

Ms. K wrote:   Thank you for exposing it, but of course the chance that it will be investigated is unlikely.  We can only pray for an honest election next time.  God bless you for being a truth teller.

Since the mainstream political narrative calls for any talk of voter fraud in the 2020 election to be labeled “The Big Lie” (think George Orwell’s 1984 “newspeak”), pursued only by so-called “conspiracy theorists,” law enforcement may not be motivated to investigate.

(If you don’t know this quote from Voltaire, you should: “I may disagree with what you say but I will defend with my life your right to say it.” This is a fundamental tenet of democracy and if you don’t agree with it, take a vacation this summer to North Korea.)

Mr. A wrote: It’s pointless to report when we know there will be no follow up or independent investigation by paid government officials who are supposed to be apolitical! Santa Barbara is under single party control with officials in control of election outcomes.

How very sad (and un-American) if true.

Ms. J wrote:  I am not at all surprised to learn about this failed investigation. My son and his roommates had fellow class men knocking at their door almost every week during the election, trying to discourage their conservative views and sometimes ridiculing them for their love for our president. They couldn’t even wave his flag for fear they would be a target. They even changed his voting address to his Isla Vista address in hopes he would not get it due to the apartment being vacant over COVID. Luckily, we caught it by logging into the voter information link.  Also, administrators and professors didn’t leave any room for him to critically or freely think. It was a one-way road and if you weren’t on it you’d fail.  So incredibly sad for our kids to be succumbed to this kind of teaching.

Again, how very sad indeed. What ever happened to real educators and an objective liberal arts program?

Mr. E wrote: It seems our government officials now fail to perform their duties at every level of government.  If things don't change our country is headed for a disaster.

Government bureaucracies exist to grow and increase their budgets. With assured pensions and health benefits, most bureaucrats have little incentive to do much more than show up and do the time.

Ms. S suggests: As an investigative reporter, you also have the opportunity to become an investigative teacher.  Perhaps a future article could ‘teach” Californians how to personally “investigate” election “issues” within their own counties.

Ms. P wrote: For me the issue of voter integrity is not about Trump but whether the USA is a republic or a banana republic.

As in, gone bananas.

Mr. F wrote:  Was there a candidate or candidates with razor edge victories, either State or Federal, that benefited from the 3000 votes?

Every election is important and deserves a voting system with integrity. Yet very true, this was not about Trump, who would never have carried California; it was about local candidates.

Ms. R wrote: I believe the responsibility for the problem goes to Joseph Holland, County Tax Collector, County Recorder, Assessor and Registrar of Voters.  Please see what happened to Tommy Gong, County recorder for San Luis Obispo, leaving his position. The real reason he left was because 100 people came to his office, presenting him with affidavits of illegalities during the voting process, of which he is to be held accountable.

Most certainly, the buck stops with Joseph Holland. If Mr. Holland allowed fraudulent votes to be counted, he should be booted out in November when he runs for re-election.

Mr. M wrote: The election fraud, especially in Santa Barbara, San Luis Obispo, and Ventura Counties, by the elected registrars goes way beyond the suspected illegally-voted ballots. the evidence of felonies and misdemeanors in connection with local measures are not open to dispute, the ballots, voter guides, election calendars are all public record and speak for themselves.

To anyone with such evidence: Please send it our way.

And very many other e-mails like this one from Mr. D:  Love this article! Tip of the iceberg thing, love to see it get more traction. I’m sending the link to all my concerned friends.

THE ASSASSINATION OF ROBERT F. KENNEDY

The RFK column also stimulated a fair amount of e-mail.

Mr. P wrote: I loved your article on RFK. I have never believed the official story. To think that the CIA is involved in this is frightening. Other than the mafia I was never quite sure who wanted Bobby dead. I didn't agree with him politically, but I felt that he was a very good man… I'm not sure why you are picking on Henry Kissinger. JFK sent the first troops to Vietnam. He had Diem assassinated. President Johnson cooked up the Gulf of Tonkin incident, as justification for going to war. All I know is that we were really afraid of communists then.

Presidents Eisenhower and Truman both tried to warn Kennedy that the CIA had become much too powerful; unfortunately, JFK was too weak at the beginning of his presidency and he allowed the agency to run circles around him, including not only the failed Bay of Pigs invasion of Cuba but also the Diem hit.

LBJ’s Vietnam escalation was about commerce and profiteering.

As for Kissinger, we quote from a 15 November Salon.com piece titled Henry Kissinger’s Genocidal Legacy: "Henry Kissinger is, of course, not singularly responsible for the evolution of the U.S. national security state into a monstrosity. That state has had many administrators. But his example--especially his steadfast support for bombing as an instrument of 'diplomacy,' and militarization of the Persian Gulf--has coursed through the decades, shedding a spectral light on the road that has brought us to a state of eternal war." It includes a quote from journalist Seymour Hersh:  "When the military men presented a proposed bombing list, Kissinger would redesign the missions, shifting a dozen planes, perhaps, from one area to another, and altering the timing of the bombing runs...[He] seemed to enjoyo playing the bombardier." The article continues: "All told, between 1969 and 1973, the U.S. dropped half-a-million tons of bombs on Cambodia alone, killing at least 100,000 civilians. And don't forget Laos and both North and South Vietnam."

Mr. M wrote: Be careful! There are some very bad people out there who don't want the truth exposed. I always believed LBJ was the mastermind of the JKF assassination but the US Government most assuredly murdered both JFK and RFK. In one of his last news conferences, RFK was asked who killed his brother. He answered that he needed the power of the presidency to find out. He was assassinated shortly thereafter. The only "conspiracy" that was thoroughly investigated was Russian collusion. They found no collusion but it was not from lack of time and money. The election fraud conspiracy was never investigated despite one hearing the constant refrain that the legal system judged the election to be clean, not corrupt.

In the column's first draft we pointed out that while Lyndon Johnson did not initiate the assassination he was in-the-know and became a willing participant in the cover-up.

But it was our column on the Ethnic Studies Curriculum  that elicited the most passion.

Mrs. E wrote: If the United States is so horribly “racist,” why are hundreds of thousands of people of color doing everything they can to come into our country?  They are sending their children all alone… would they really do that if they believed this was not going to offer an opportunity for their children?

Indeed, not only do hundreds of thousands of people of color strive to emigrate to this country each year, very many positions of power (congressmen, governors, mayors, judges, etc.) are now held by people of color. The Civil Rights Movement may not be perfect but great progress has been made since Martin Luther King, Jr. delivered his “I Have a Dream” speech.

Mr. R wrote: We are a Nation built on our shared values of equal opportunity versus equal outcome.  However, all of that is now under attack by those who focus on our differences and want to separate and divide our country based on race, sex, success, politics, etc.  Those who hate us are watching us tear ourselves apart - and reveling in our self-destruction. I hope you don't get too many nasty email responses.  Just ignore them and keep fighting for good and right.  Don't let Cancel Culture cancel you.

The Investigator received a phone call from a male with a youthful voice who wished to protest our perspective on Critical Race Theory—the sole dissenting voice of everyone from whom we heard. We suggested he write an e-mail with his own perspective to set us straight. “I’m surprised you answered your phone,” he added, to which I replied, “The Investigator hides out from no one.” Turns out, hewas hiding out behind a disposable number with no identity. And he never sent the e-mail.

And finally this from Ms B: I taught at City College for many years.  I worked hard. I was dedicated to my vocation and my students. And I am angered at what those with a political agenda have done to our beautiful school. The California community college was intended to be the centerpiece of education within every municipality in our state. A treasure, open to everyone in order that they could seek whatever career they chose; or simply for enrichment. Everyone, regardless of ability, class, age, or any other status. That’s all been pissed on.

Indeed. Without proper education, the fabric of a country is torn apart. “Education is the necessary foundation for any society,” says former Colorado Education Commissioner William Moloney. “As with a house, when the foundation crumbles, society shall fall apart soon thereafter.” Mr. Moloney added: “What’s going to save the country is taking your kids out of the current education system and home-schooling them.”

And finally, a comment from my dear 95-year-old mother, who had her own take on the ABCs: Ability Before Color.

Posted by Robert Eringer at 7:30 AM