We march back into the Padre, right up to the Caribbean-American, whom I’d decided to razz every hour till he caved.

“I’ve got two rooms,” he preempts me.

I sag—a physical response to becoming utterly demoralized at the thought of having to commit myself with a credit card to overnighting in this very odd city.

Van Stein asks, "Where do the ghosts hang out?”

“You know what I’m talking about,” says Van Stein.  “Spartacus.”

We turn to eye the bellman.

“Between ten at night and three in the morning,” he continues.  “I’ve seen him myself.”  He pauses, and adds, low of voice, “and we hear stories.”

An assistant manager, wearing a stern expression, suddenly appears behind the desk; the bellman blushes and shushes. 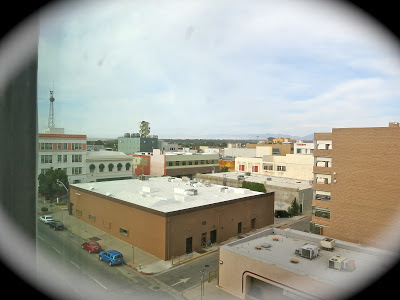 Upstairs in my room on the fifth floor, my windows are locked.

I assume the suicide compulsion in this town is just too strong to risk unlocked windows.


Indeed.  I gaze at the Bakersfield skyline and it leaves me, well, almost suicidal.
We descend from Padre Hotel rooms to search for our wheels, downtown Bakersfield.
Oddly, my Range Rover reappears outside a retro movie house-converted into something that defies definition and we climb in, sorry we’d left our travel bags hostage to rooms already linked to credit cards.
“Where to?” I ask Van Stein.

Everywhere sucked.
“I suppose,” he says, “we should get Oildale out the way.”

Oildale. The poor-white-trash capital of the West, across the Kern River in north Bakersfield.

How do you tell the age of an Oildale female?

Multiply the number of tattoos by the number of missing teeth.
Off we roll, straight up North Chester to a circle named after Bakersfield’s founding father, Francisco Garces, on which sits an auto depot with a large motto emblazoned beneath a large dick on the roof. 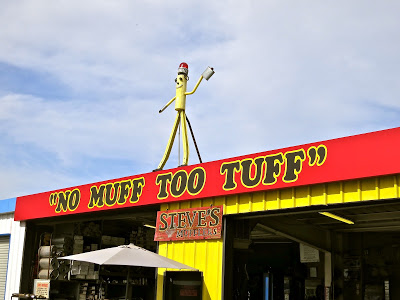 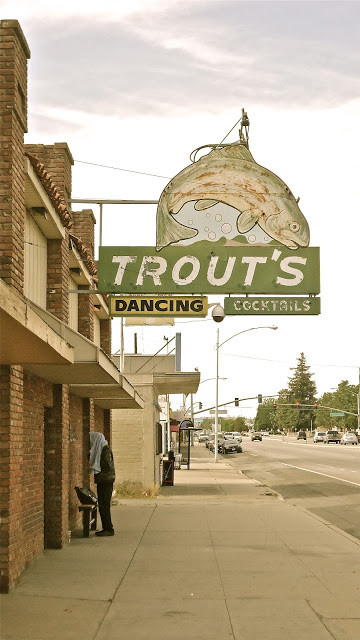 And soon after we plunge into the depths of despair.

This is Merle Haggard country, where, outside a dive bar called Trout’s, some disheveled young man is enjoying a mid-afternoon crack break.

“Nah, that crack-head is too focused on his habit.”

The addict abruptly turns on us, intent on cracking our heads, from the look of his manic eyes.

I hit the pedal and screech up North Chester to take in the local highlights:  a barbershop, closed; a car wash, closed. And the last picture show, closed. 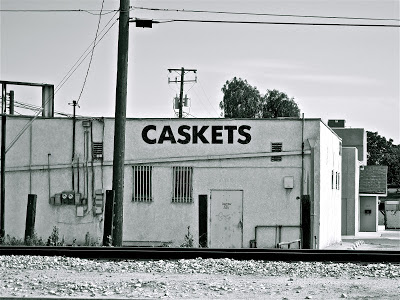 The only place open is a warehouse selling caskets.

We cut into the residential neighborhood and find that every small house has a pickup truck and mobile home in the driveway.

“That way!” hollers Van Stein, navigating us along an oil-drilling field that never ends, to an oasis called Ethel’s, situated on the edge of the abyss. 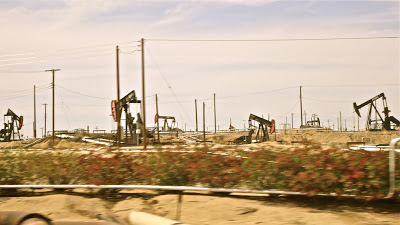 To survive, we reason, we need to do whatever the locals do, try to fit in, which means ordering Coors beer, swigging it directly from the bottle and hum Merle Haggard tunes.

A guy in a cowboy hat next to us at the bar doesn’t buy it—or us.

“You boys are almost white enough to get by here,” he says.

Fortunately, he and his incestuous brethren are distracted by a spectacle outside on the road. 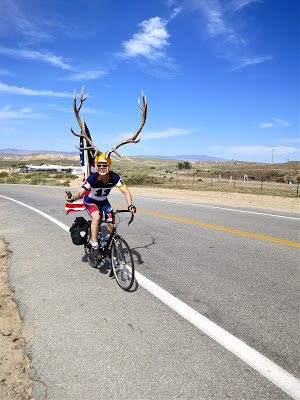 We follow them out and cannot believe our eyes:  a half-man, half-elk mutant riding past on a bicycle.

Now I know why the American Lung Association designates Bakersfield worst air pollution in the nation.

“This is downright methanic,” I say.

“Is that a word?” counters Van Stein.

“It is now.  Ever since I got here I’ve been passing pure methane.  What’s that about?”

“At least you’re not growing horns."

Gingerly, I squeeze by, not turning my back on the throng while I ease myself behind the wheel.

"In these parts," drawls a redneck, "we think this kind of ve-hi-cle comes from outer space." 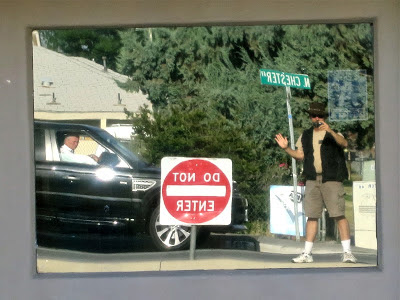 “Just nod and smile,” whispers Van Stein, fastening his seatbelt.  “And get us the f--- out of here.”

“See you later at Trout’s,” I call out in a friendly manner.

“Better not,” replies the redneck.

I leave a trail of dust, but these poor buggers eat dust for breakfast, lunch and dinner, so they just stand there watching as we roll away, breathing it all in, growing horns.

Van Stein looks back at them, then at me.  “What did he mean by that?”

I shake my head.  “And why does everyone around here speak with a southern accent?”

Van Stein shrugs, but we already know the answer:

These are descendants of the Okies, who moved here from the Dust Bowl during the Great Depression.
And they still talk the way their granddaddies did.

Most of them have a DUI before the age of 25, which they honor as a right of passage, believing there’s something wrong with those who don’t.
Posted by Robert Eringer at 8:10 AM