I notice, in my rearview mirror, a sedan I’ve seen more than three times since leaving Ethel’s.

“Someone’s tailing us,” I say.

“It’s either the rednecks or the Lords—unless there’s someone else we’ve pissed off.”

Only three hours in town and, as with JFK, everyone has a motive.

“Maybe we should leave,” I add hopefully.

Van Stein has an artist’s thing about transforming ugly to beautiful, but here in Bakersfield—and especially Oildale—he’s biting off more than he can chew.

At a red a light, I gaze up at a billboard with the lamest logo I’ve ever seen:  Bakersfield.  Life as it should be.

“You’ve got paints,” I say to Van Stein.  “Ever tried graffiti art?  Get up there and add the word slow.”

“So I’m up there messing with their logo, setting everyone straight, and what’ll you do if the cops turn up?”

“Toast your memory back at the Casket?”

“You think they’re doing this to us on purpose?” I say.

Our study of creativity and madness during a period of ten years and an odyssey through over a dozen places—such as Gheel, home to the relics of St. Dymphna (the patron saint of lunatics)—dredged up this odd phrase dreamt up by pioneering psychiatrists, meaning, essentially, nuts, on the basis that someone possessing ideas of reference believes that everything around him is happening because of him personally.

http://www.clubhouseonwheels.com/2019/05/st-dymphna-day.html
Three days seem to pass and it is still only teatime, four o’clock.

“Dammit, what time does it get dark?” I ask Van Stein.

“It’s my job to know.  I’m a nocturnal artist—remember?  Let’s drive to the Plateau, see where the sun sets.” 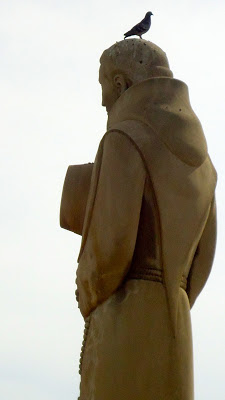 I point to the statue of Francesco.

“The original Lord of Bakersfield,” I say.  “Franciscan.  Probably a pedophile.  I’m gonna guess the current Lords worship him.”

A mile on, Van Stein points to a turnoff.  “That way!”

Not the kind of panorama you’ll ever see on a picture postcard:

These locals pay premium prices for property that overlooks a desert valley covered with drilling donkeys and oil refineries as far as the eye can see.

“Wow!” enthuses Van Stein.  “This may be the ugliest thing I ever saw!”

I shake my head.  “It’s definitely the stinkiest I ever smelled.”

“Pull in there,” commands Van Stein. 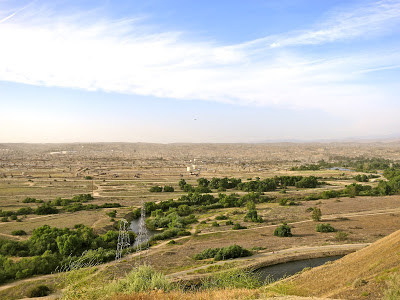 It means waiting at a red light for twelve minutes before turning into the parking area adjacent to a cliff-side recreation park where local lovers stroll to take the fumes.

“Are these people nuts?” I say.  “How can they think this is scenic?  Or romantic?”

“Because,” says Van Stein, “they have the rest of Bakersfield to compare it to."  He looks around.  "This is the inspiration I’ve been looking for:  sunset over drilling fields.  Think Bosch.”

Van Stein jumps out, snaps a dozen photos and jumps back in.

Van Stein shakes his head.  “We need to see it at night for the full experience.”

“I know you keep saying that, but I’ll be surprised if we last until then.”

We take Chester—a stretch of road from this point ingrained in our psyche forever—back into downtown Bakersfield and now we have two sedans trailing us—plus a pickup truck.

Sitting at a red light, I look through my rearview mirror at two guys in the sedan behind us wearing dark glasses and surly expressions.

“What have we done?

“If it’s the Lords, they want to stop us doing it.”

“Why don’t we just pull over and tell them the truth:  I’m an artist and you’re a writer and we explore creativity and madness.”

“You think they’re going to believe that?”

“We might as well just go to a restaurant,” I say.  “Have a drink, a long dinner—maybe it’ll be dark by the time we come out.”