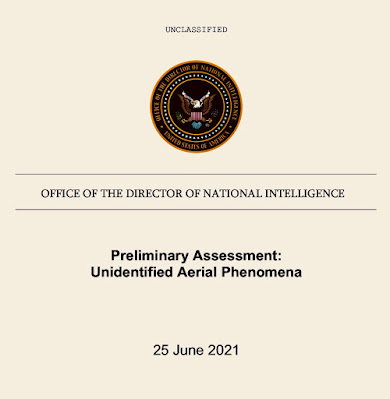 Report: “The limited amount of high-quality reporting on unidentified aerial phenomena (UAP) hampers our ability to draw firm conclusions about the nature or intent of UAP.”

Meaning: We know nothing.

Report: “UAP clearly pose a safety of flight issue and may pose a challenge to U.S. national security.”

Report: “In 18 incidents, described in 21 reports, observers reported unusual UAP movement patterns or flight characteristics.  Some UAP appeared to remain stationary in winds aloft, move against the wind, maneuver abruptly, or move at considerable speed, without discernable means of propulsion.”

Meaning: The dynamics are un-earthly.

Report: “UAP pose a hazard to safety of flight, 11 reports of documented instances in which pilots reported near misses with a UAP.”

Meaning: We now have more than COVID-19 to worry about when flying—and masks won’t help.

Report: “We currently lack data to indicate any UAP are part of a foreign collection program or indicative of a major technological advancement by a potential adversary. We continue to monitor for evidence of such programs given the counter intelligence challenge they would pose, particularly as some UAP have been detected near military facilities or by aircraft carrying the USG’s most advanced sensor systems.”

Report: “The UAPTF has begun to develop interagency analytical and processing workflows to ensure both collection and analysis will be well informed and coordinated.”

Meaning: The armed services (and 28 intelligence agencies) have never cooperated with one another on this subject, which is partly why we know diddly-squat.

Report: “The UAPTF has indicated that additional funding for research and development could further the future study of the topics laid out in this report.”

Meaning: As always, we want more money from the taxpayer to waste on nonsensical studies and dumb experiments.

Bottom line: Nothing of substance here, just the typical government gabble of gobbledygook.

They don’t have a clue.

Well, that’s not exactly true. They’ve had plenty of clues, going back 70 years, but avoided paying any attention to them; avoided, in fact, any attempt to connect the dots because no one in the armed services wanted to own up to having witnessed a UFO due to the stigma attached to “flying saucers” and, with it, the fear of harming your career if you claimed to have seen one.

The U.S. Government is either incapable of figuring things out or it is incapable of telling the truth, probably a combination of the two.