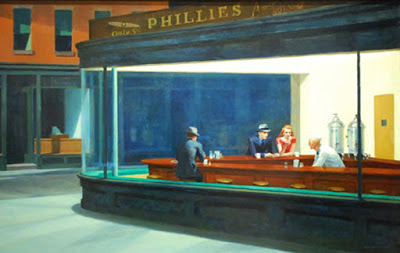 The first time it happened was in Chicago.

I was supposed to attend an annual booksellers convention, though I hate conventions almost as much as convention itself.

All I could see was a sea of people trying to sell stuff to other people.

I snuck into a long walk, taking the air in Grant Park until happening upon the Art Institute.

Passionate for new stimulation, I bought a ticket and aimed for the American department—a world of Homers and Sargents and Whistlers.

I stopped short, breathless.
There before me, in the middle of an exhibition room on a freestanding dark gray wall to itself, Nighthawks by Edward Hopper.
I studied the rectangular five-foot long painting for what seemed several minutes and was amazed to discover, checking my wristwatch, that over an hour had passed.
I could not pull myself away, so possessive was the effect of this painting on my psyche.    My heart beat faster than usual and suddenly felt lightheaded… an odd giddiness as this masterpiece... drew me in…
...until there I was, standing on the pavement outside the diner, looking straight through a large, stark window at three late-night patrons.
I looked right and left.
I was no longer in Chicago, early summer.
I seemed to be in Greenwich Village, New York City. And it was icebox cold.
It took me a whole half-minute to figure out where the door was, because it did not exist in the painting.
I found it, off to the right and strode boldly inside.
The diner was almost as frigid inside as out, its full-length un-paneled window a radiator for chill, compounded by the icy stares of a male and female sitting side-by-side.
A second male sitting on his own did not even look up, but seemed intent on hiding his face.

And the server regarded me with a cold expression that suggested another customer was not what he wanted on this very quiet night.

Feeling unwanted and self-conscious, I sat upon the nearest stool, five down from the solitary male and, as a defense mechanism, awkwardly plucked a newspaper from a basket on the floor.

Plopping it on the counter before my eyes, the paper’s date shook me:  January 21st, 1941.

Under such absurd circumstances, I craved a stiff cocktail.

The server could read my mind—or so I thought.  He shook his head.

And then I realized:  I’d stepped into some kind of virtual reality interactive museum exhibition—perhaps a sophisticated, Disney-style hologram.

“I’ve never experienced this before.”

The man sitting by himself turned to his right and fixed his eyes upon me in a mournful gaze that sent shivers up my spine; I had to turn away and only then did he resume his solace.

“Mister, can I get you something?” asked the server.

“You know, this is interesting, but it’s freaking me out a little.”  I looked around. “Where’s the exit?”

Slightly relieved, he pointed to the door I’d just walked in from.

“Whatever you say, mister.”

I exited, shivered from the cold and returned to the spot on the pavement where I’d arrived.

Now, four curious faces watched me through the plate glass window from inside the diner.

Only the woman cracked a smile, as if I were the entertainment putting on some kind of freak show for their benefit.

I stood in place, closed my eyes.  When I opened them... I was still freezing cold, standing outside the diner.

I stormed back inside.  “Okay, what’s the trick?” I felt irritated now.

“Get back?” said the server.

The server shrugged, motioned his head forward.  “Uptown, I guess.”

The solitary man nearby, hitherto silent and brooding, glared at me.  “What about Chicago?” he snapped out the side of his mouth.

The redhead in the volcanic red dress erupted:

“Peoples sure dress strange in Chicago!”

I looked down: blue jeans, Nike Air sneakers and an unconstructed linen jacket—which was why I was so damned cold.

“Don’t they believe in hats in Chicago?” cracked her companion, shaking his head.

“Maybe they blow away,” said the redhead.  She giggled. “Get it?  Chicago’s the windy city.”  She giggled again at her own joke.

I took a stool.