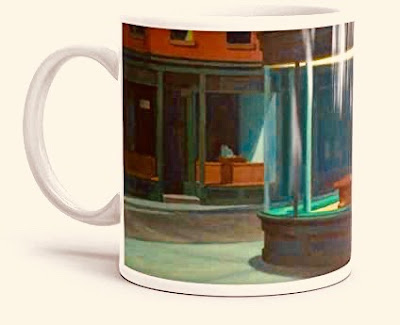 I took a stool.  “You know,” I said.  “I think I’ll have coffee.”
The server turned and silently filled a white mug with steaming black caffeine juice and plunked it in front of
me. 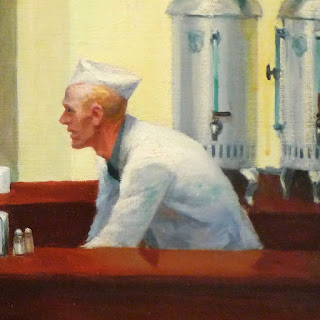 “That’ll be five cents.”  He looked at me expectantly, wanting payment up front.
Five cents.  Cute.
I dug into my jeans pocket and produced a quarter, slapped it on the counter.  “Here’s twenty-five.  Keep the change.”
The server’s eyes widened, part surprise, part gratitude.
A second later those same eyes narrowed.  “Hey, what is this?”  He picked up my coin, inspected it.  “This ain’t two-bits, buster.  Cheap metal.”  He looked closer.  “Hey, the date on this—1996?”  He glared at me.  “That’s it.”  He grabbed my mug of coffee, took it away and slammed it near the urn behind him.
“Hey, lemme see that,” said the man with the redhead.
The server flipped him the coin.
The man inspected my quarter, shook his head, a wan smile, dug into his pocket, looked at me. “I’ll buy it from you for ten cents.”
“Done,” I said.
The man smacked a Mercury dime on the corner.  “Give him his coffee.”
“Can I see it?” said the redhead.  “Ooooh, 1996.”  She gaped at me.  “What’s your story, morning glory?”
“Huh?”
“Is that where you’re from—1996?”
“Actually, 2015.” 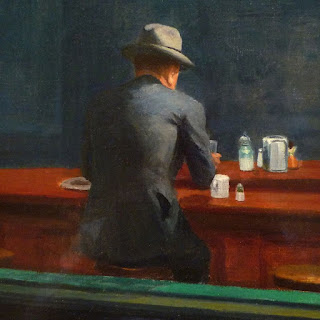 The solitary man looked up, first at me and then at the couple.  “He got it at a magic shop.”
“Nah, look at his togs, abercrombie,” said the woman. “I knew if we stayed up late enough we’d see something interesting.”

Some new fangled version of Candid Camera, I thought.  Set up by a TV show.  But what a great set—exactly like the painting.  Any moment they’ll jump out and we’ll all stand around laughing.  Including these four wonderful actors in period dress, talking in the lingo of the early 1940s.
I sipped my black coffee quietly.  It was hot like the devil, black like the night. And it warmed me.

“Who else? Died in a plane crash last week. Only thirty-three. Clark must be broken-hearted.”

These actors are good.

“I ain’t never getting’ on a plane,” she added.

The solitary man glanced at her with a wicked grin. 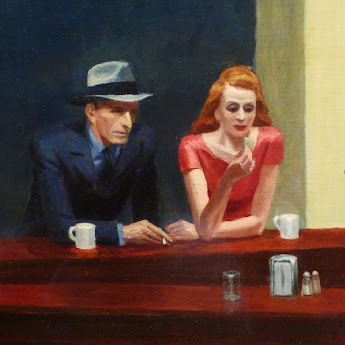 Her companion shot her a look.

“How so?” I asked.  This was cheeky, but I was beginning to enjoy myself, playing along.

She looked at me long and hard, a lopsided smile on her made-up face.  “No one knows people better than a madam.”

“I ran a brothel.  Hollywood’s biggest.”

Her companion shifted with discomfit.

“You knew Clark Gable?” I asked.

“Enough!” Her companion brought his right fist onto the counter with a thump, causing the server to startle.

He glared at her.  “Nowhere’s safe,” he muttered.

She scooted his remark with a back wave of her hand and returned her attention to me.  “Whattaya wanna know, future boy?”

“Why are you here now instead of Hollywood?” I asked.

“Had to leave fast,” she said.

Her companion closed his eyes, shook his head.

“The coppers were onto me,” she added.

He raised his hand as if he were going to slap her, thought better of it.

“Don’t blow your wig on me,” she snarled.

What a great exhibition this was!

“The police are after you?” I said.

She laughed and then began to hack like a smoker.  “I know too much, honey.  Clark, Charlie, Errol, even Bogey."  She winked.  "Knew ‘em all, better than most.”

“How did you become a madam?” I asked.

“Got lucky, I guess.  Hollywood in the twenties, you couldn’t beat it.  And the thirties, even better.  Then this whacky war.  And they blame Hollywood.”

“That horse’s ass U.S. Senator, says Hollywood is responsible for getting America into the war.  War Fever, he calls it. They are lovers in Hollywood, not fighters.  Trust me, I know.  But it brings heat on Hollywood.  Everyone digging for something.  Before ya know it, they’re onto me.  Someone yakked.  And Mayer freaks.”

“Jeez!  Louis B. Mayer!  You haven’t heard of MGM?  He had his own brothel to serve his own studio actors, keep their shenanigans outta the rags.  Even Louella and Hedda don’t know about that.  I ran it for him.”  She winked.  “My hookers—real sweet patooties. He’s afraid I’m gonna bleed him.”

“You’re talking too much,” hissed her companion.  “You’re gonna get plugged, you keep this up.”

He glanced at the solitary guy who hadn’t moved a muscle, aside from an occasional facial twitch.

“Just a joe,” she said.  “You got the heebie-jeebies—don’t blow your wig.  I’m sick of this crap.  Why should I be the one whose gotta run and hide?”

“We’ve been through this,” hissed her companion.  “It’s not safe.”

“Not safe?  For who?  They’re the ones who should be hiding, not me!  I's just providing a service.  LB continues to do as he does and I’m out east freezing my butt off.  It ain’t fair.  I’m paying for everyone else’s brodie.”

And I’m sitting here, thinking, why aren’t they charging admission for this?

“Let’s talk about it back at the hotel,” he said.

“I’m sick of being stuck in a hotel room!” she shrilled.  “I’m sick of this apple.  Maybe I’ll just go back.  That’s what I’ll do, get on a bus and show up at the studio, teach LB a lesson!  Whattaya think about that, buster?”

Her companion shriveled in his stool, shaking his head.

“Louella or Hedda will protect me.  Or maybe I’ll just go to the coppers.  Tell the truth about Louis B and Clark and Charlie and Jimmy too.  Maybe I’ll…”

Out the corner of my eye, I caught the solitary figure abruptly move his right arm, dipping his hand into the lower front pocket of his jacket.  From it, he plucked a snub nosed revolver.  His hand trembled slightly as he raised the weapon and pointed it at the redhead.

Her companion reached to his waist, presumably for his own firearm; the solitary figure altered his aim from the redhead to the other man.

He fired three shots in succession, all three hitting their mark.  Propelled by these blasts, the victim fell backwards, flapping his arms, crashing through the plate-glass window, shards of glass everywhere.

The redhead now cowered under the counter, screeching for help.

The triggerman rounded the corner and aimed at her from close range.

The server scampered out the back, but I sat mesmerized by this dramatic turn of events and watched as the shooter stooped to check the woman’s pulse before firing another shot—blam! —directly into her brain.

This exhibition is definitely not for kids, I thought to myself.

The killer stood and calmly straightened himself before catching my eye.

Assuming the show was over, I clapped my hands.
“Amazing,” I said.

He raised his revolver and pointed it directly at me.

I gestured at myself with both arms. “You’re going to shoot  the audience?” I said, somewhat amused.

I saw the flash from the barrel before I heard the blam!

And then all was dark.
Posted by Robert Eringer at 8:21 AM