INTO ART 4: THE NIGHT CAFE 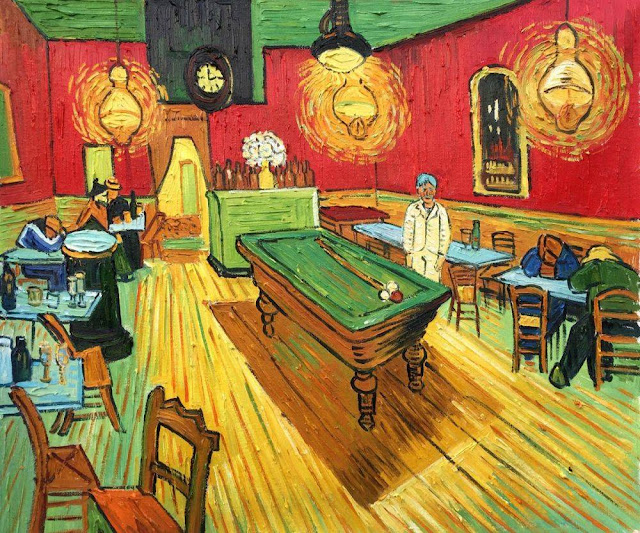 The second time it happened was in New Haven, Connecticut, about a year later.
I was there for a meeting at Yale University Press, and I wandered into the nearby Yale Art Gallery. 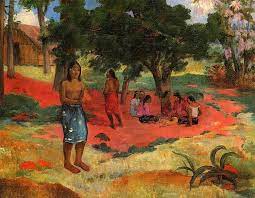 I'd passed a painting called Whispered Words by Paul Gauguin, which did nothing for me (I was never a Gauguin fan). 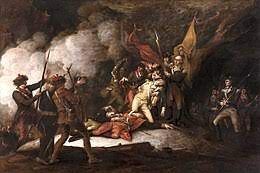 Next: The Death of General Montgomery by John Trumbull.  It was dramatic and fascinating, but not emotive enough to stir my soul.

Then I came upon The Night Café by Vincent Van Gogh.
This one  captivated me.  Garish, clashing colors—yellow, green red—gave way to a white-suited figure looking directly at me.

Feeling somewhat self conscious, I shifted my eyes to three lamps hanging from the ceiling, auras of light around each in tippled brushstrokes. My eyes jumped from one lamp to the next across the top of the painting, and back again, as if they followed a pendulum.

I felt a rapid heartbeat and faintness as the painting’s perspective seemed to yank me in… until I stood on the hardwood floor, looking across the café, a pool table in the middle of the room, the white-suited figure staring straight at me in disbelief.
He spoke to me in French.  A greeting, I think.
I turned around and looked through paneled windows into a black night.  It smelled like winter, dank—a hint of onion.
Is it happening again?
I turned back.  The white-jacketed figure continued to study me in bewilderment.
Yup, here we go again...
I knew a little about Van Gogh, where he lived, and where he had painted The Night Café.
I must be in Arles, France.
I tried to think when.
Late 1880s.
“Is Mister Van Gogh around?” I asked. 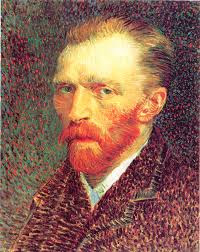 The Frenchman tilted his head.  “Vincent?” He pointed to a table.  “Artiste fou,” he sneered.

A scrawny, bewhiskered man with red hair sat hunched over a table. Before him, a large-stemmed glass half-filled with green potion.  He lifted it, looking at me and toasted the air.

I ambled toward him, uncertain how to proceed.  “Mister Van Gogh?”

“Ah.”  He motioned at the plain wooden and straw chair opposite him.  “Sit.”

He raised his glass to his lips and finished the potion in one gulp.  Then he raised his hand to signal the white-suited figure.  “Deux!” he called.

The man stormed over and, hand out, delivered a stream of invective.  He seemed to be demanding money.

Van Gogh held his ground, made his case.

“Sacrebleur!”  The man threw up his arms and stomped off.

Van Gogh saw in my face that I did not understand the exchange.  “Monsieur Ginoux and I have a deal.  I painted his café in exchange for food, drink and rent—I used to take a room here.   It is ugly in here, as you see. So I painted it ugly.  Very ugly.”  He chuckled.   “So Ginoux is upset.  But a deal is a deal, no?”

The irony of this astonished me.

“You speak good English,” I said, observing that this man, Van Gogh, had both ears intact.

“Of course.  I lived in England.  Ramsgate.  And then Middlesex.”
Monsieur Ginoux stomped back with a glass for me, into which he poured a healthy shot of absinthe, and then filled Van Gogh’s glass.  He returned with a pitcher of water, a small dish of brown sugar cubes and a flat perforated spoon. 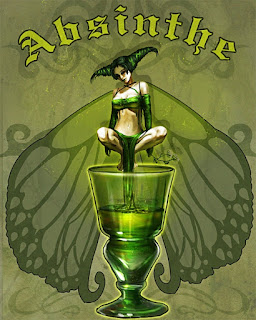 Van Gogh must have noticed my puzzlement.  “I show you,” he said.  “There is a ritual to this.”

He laid the perforated spoon over my glass and placed upon it a cube of brown sugar.  Then he picked up the jug and dripped water, one drop at a time, until the cube was saturated.

“Now we wait,” he said, performing the same ritual on his own libation.
He focused his eyes on the sugar cube, willing it to melt through the spoon and into the bright green liquid. The absinthe slowly changed its color from translucent emerald to an opaque milky green haze.

“Now we drink our green fairy.”

I raised the glass to my mouth and allowed its potion to wet my lips:  a partly bitter, slightly sweet anise flavor.

“Better than turpentine,” said Van Gogh.  He gestured with his arms at men slumped over nearby tables.  “Drunks with nowhere to sleep,” he explained.  “But you?”

I shrugged.  “I'd tell you, but you wouldn’t believe me.”

“I walked into your painting, of this café, from the future.”

Van Gogh leaned back and eyed my attire.  “A new kind of night prowler,” he said.  “One can go mad in an all night café.”

“That’s what happens in the future.  Your work hangs prominently in all the world’s most important museums.”

“And him?” Van Gogh gestured with his arm.

I turned to see a husky, mustachioed figure straggle in from outside.

“Paul!” Van Gogh called.  “You must meet my new friend from the future!” 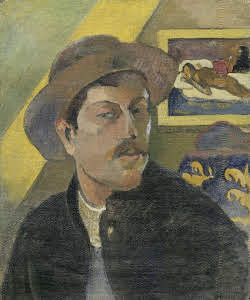 The man stopped, shook his head in disgust and made a lewd gesture at my host.  “F--- off!”  He trudged onward to a table of his own, a sheathed sword belted to one thigh.

“Asshole!” Van Gogh shot back.  He glowered, then calmed after a gulp of absinthe.  “I never should have invited that bastard to Arles.”

“Gauguin.  He is a slob, an oaf.  I must throw him from my house, like rubbish.”  Van Gogh said this loudly, so everyone in the café could hear, although most were too drunk to comprehend.  “And he has no talent.”

“Ha!” Gauguin bellowed from his table.  “I have no talent?  People laugh at you behind your back!”

Van Gogh looked at me.  “You see?  This is what I get for giving him room and board.”  He turned to Gauguin across the café.  “Come, you freeloader!  You may learn something.  Here sits a man from the future!”

Gauguin spewed a gulp of absinthe and thumped the table hard with his fist, laughing uproariously.  “You see?”  He gestured grandly.  “The man is insane.  I rest my case.” 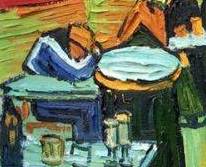 The jury of one—a tramp—raised his head in a drunken daze, looked around and plopped it back onto his arms.

“Most people paint beauty,” Gauguin, continued.  “Him?  He paints this ugly café.”

Van Gogh shook his head, seething.  “Can you believe?” he said to me.  “This pig insults me where I live.”

Van Gogh’s eyes welled; he spoke quietly.  “He is like this in my home.  I come out to get away from his abuse and he follows me.  I think he will be more polite in public.  But, no—he provokes me in public.”

Van Gogh stiffened.  He wiped a tear that dribbled from his left eye.  “I will kill this man,” he growled.

“What’s that you say?”  Gauguin leaned toward us cupping his hand around his ear.

Van Gogh stood and bellowed, “Why are you so interested in everything I say?”

“Because it makes me laugh!” Gauguin bellowed back.  “And I like a good laugh!  Thank you, Fou rou!”

Van Gogh ignored my question, turned to Gauguin.  “You call me crazy—you, you sex fiend!  Your wife hates you because you screw every woman who will sleep with you.  Her money pays for your whores!”

Gauguin stood, picked up his water jog and flung it at Van Gogh.

I ducked as it flew over my head and smashed into the wall.

Monsieur Ginoux finally had had enough.  He pointed first at Gauguin, then at Van Gogh.  “Aller!”

Van Gogh, his face flushed with anger, picked up his absinthe and drained it in one gulp.  “Au revoir, monsieur,” he said to Ginoux.  He nodded a farewell at me and aimed for the door.

I rose and followed him out.