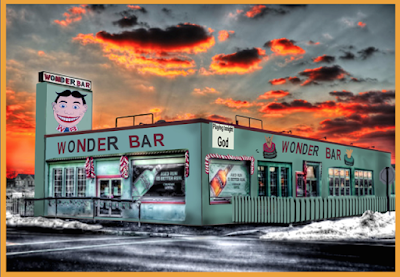 I did not think that Vincent Van Gogh wanted to hear that people thought that he was mad, that he would soon reside in a lunatic asylum and that he would die young at his own hand.

Numbly, the artist trudged off.
I trailed behind at a discreet distance, unsure what else to do.

The streets were dark, but I could see Vincent, in silhouette, dabbing at the side of his head.

Soon we entered Place de Forum and I recognized a famous institution from another Van Gogh painting:  Café Alcazar.
It was still lit, but winding down from the look of it.
Above, poetically, the night sky was filled with stars.
Van Gogh entered; I hurried my pace until just a few steps behind him.

A waiter clearing tables looked up, alarmed, at the bloody mess that Van Gogh had become, blood dripping and staining his blue suit.

The artist trudged on, a determined gait, to a staircase, which he began to climb.

I followed him. And the waiter followed me.

At the first landing, Van Gogh steadied himself at a door, one of three, and rapped on it with his right fist.

A hushed quiet ensued, as we stood frozen in suspension and darkness.

This time I heard a muffled noise from behind the door.

From my position a few steps down, I could see light thrown upon him, illuminating the blood and gore.  I caught a glimpse of a young woman in the doorway, looking, aghast, at the artist, her eyes wide with terror.

I saw the young woman drop and heard a thump as she fainted and hit the floor.

The artist turned and almost crashed into me as he descended the steps.

He stopped, his face a few inches from mine.  “It is what the matadors do, no?”  He assessed bewilderment in my eyes.  “A matador cuts off the bull’s ear and gives it to his favorite lady,” Van Gogh explained.

With that, he brushed past me and the curious waiter, launched into the night.

I tried to follow, but suddenly felt out of breath.  The darkness of the stairway consumed me.  I could not see anything now, only blackness, and... and… when I opened my eyes, I looked straight into those of a mildly familiar face. 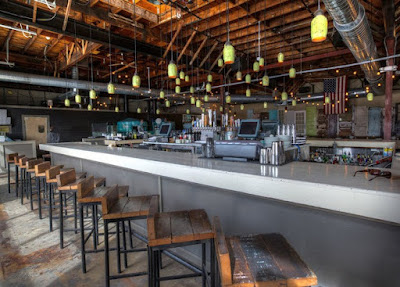 “You again?” he said, leaning forward, hands planted on the bar.

I blinked a few times, not sure I was still in Arles, New Haven, dreaming or hallucinating.  I straightened myself on the barstool and looked right and left.

“Don’t tell me,” said Eddie the bartender.  “You want to know what you’re doing here, right?”

Eddie looked at me, somewhat amused.  “Closing time.”  He paused.  “Again.”  He shook his head.  “Mister, I don’t know what kind of medication or drugs you take, but you should definitely see a doctor. You’re freaking me out.”

“Freaking you out?  You have no idea where’ve I’ve been!”

Eddie shrugged.  “And now you’re here.  But you weren’t here five minutes ago—and I didn’t see you come in.”

“Just out of curiosity, boss, where do you think you’re supposed to be?”

Posted by Robert Eringer at 9:19 AM